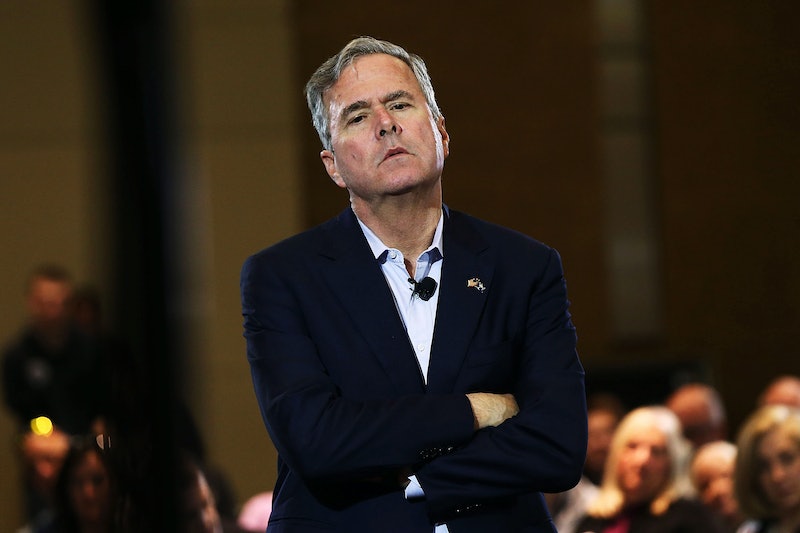 The GOP Nevada Caucus was called fairly quickly after caucus locations had closed and workers began tallying ballots. Unsurprisingly, Donald Trump once again emerged victorious, though that doesn't tell the full story of a rather chaotic Tuesday caucus. Election personnel had their hands full with ballots boasting many candidates who've already dropped out of the race. The latest candidate to do so can at least rest easy tonight knowing he still has the hearts and votes of a select few Nevada Republicans. Jeb Bush got some votes in Nevada. Please clap.

Reports have emerged that current candidate and participation medal aficionado Marco Rubio has already gone to bed, but somebody seriously needs to wake up Jeb! He's probably already gone to sleep with his best friend — a rather risqué line he uttered during his campaign suspension speech and one of the top reasons he's excited to no longer be in the running — and yes, he's probably never returning to politics again. Nonetheless, he appears to be gaining on his fellow failed candidates. Such an impressive showing despite no longer campaigning will surely make his number one fan and mother proud, right? Jeb's GOP Nevada Caucus votes could not only put him back in favor with Barbara Bush but totally counter her argument that "we've had enough Bushes" in the White House. It's Jebmentum!

Sticking it to your parents is a pretty hip strategy for a candidate who, at times, appeared more akin to a petulant teenager than an established politician. Other idiosyncratic greatest hits from Jeb include his inability to put on a hoodie and yet his love for the garment still shining through, albeit awkwardly. His botched attempt at simply wearing a jacket almost directly reflects the "aw shucks" lovable fail of a campaign he waged. The former Florida governor is hopefully having sweet dreams in that hoodie about the handful of voters who somehow found it in their hearts to spend their caucus night turning up and showing love despite their favorite candidate no longer running.

Other candidates who appeared on the ballot but haven't appeared in a debate or a rally in quite some time — because they suspended their campaigns — include Rand Paul, Mike Huckabee, Chris Christie, Carly Fiorina, and Rick Santorum. It comes as a surprise that so many failed campaigns have been resurrected but nobody said the GOP Nevada caucus would be the most sensible event of the 2016 election season. Those unable to vote for Jeb in Nevada can still pick up a Jeb! guacamole bowl and snack on the sidelines like their favorite candidate is most likely doing in his waking hours, now that he's no longer in politics.