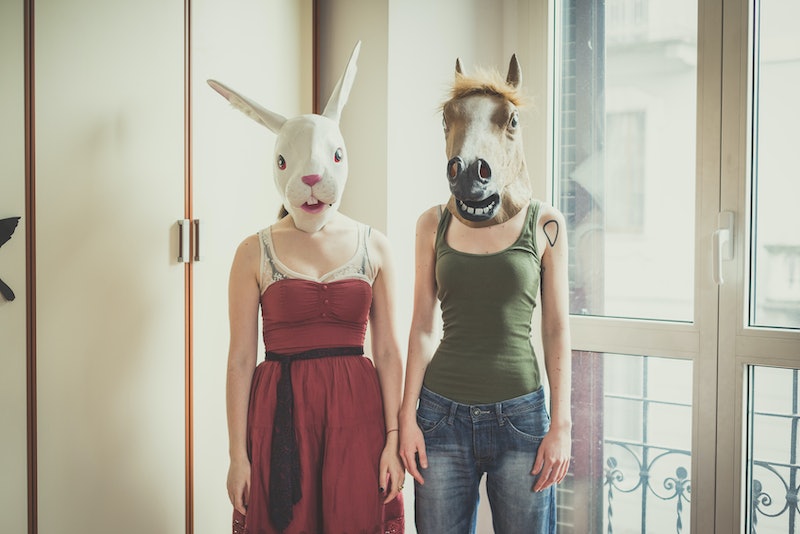 There’s this age old dating cliché that says opposites attract, and thanks to pretty much every Nicholas Sparks story out there, we’ve been conditioned to believe that two totally different people from different sides of the street can and will ride off into the sunset together. But a new study conducted by relationship researchers from Wellesley and the University of Kansas says that opposites don't attract. In reality, people are attracted to others who have the same views and values as themselves.

The study, which was published in the Journal of Personality and Social Psychology, found a “paradigm shift” in how we view our relationships. In order to discover how important similarity was in forming relationships, professor Angela Bahns and her team of researchers approached over 1,500 random pairs (romantic couples, friends, and acquaintances) and surveyed them on their values, prejudices, attitudes and personality traits. One major finding of the study was that relationships don’t change individuals over time. In fact, future friends or partners are actually similar “at the outset of their social connection.” In other words, people had similar views on life even if they had just met.

"Picture two strangers striking up a conversation on a plane, or a couple on a blind date," Bahns said in a press release. "From the very first moments of awkward banter, how similar the two people are is immediately and powerfully playing a role in future interactions. Will they connect? Or walk away? Those early recognitions of similarity are really consequential in that decision … We're arguing that selecting similar others as relationship partners is extremely common—so common and so widespread on so many dimensions that it could be described as a psychological default.”

So, there you go. As science will tell you, opposites really don't attract. You’re going to form relationships with people who are similar to you whether it be through personality, likes and dislikes, or even goals. Here are some other reasons why opposites don’t attract, according to science and experts:

1. People With Similar Personalities Are Happier In Their Relationships

A 2014 study of 174 couples conducted by researchers Nathan Hudson and Chris Fraley found that couples who were more alike in personality were more satisfied in their relationships than those who were different. However, certain traits were found to have more clout than others. For instance, partners who had similar levels of “agreeableness” and “emotional stability” were found to be more satisfied in their relationships. Traits such as extraversion, conscientiousness, and openness, however, did not necessarily predict relationship satisfaction. Because of that, further research led to the conclusion that couples who perceived themselves as similar were found to be happier.

As Sean Horan assistant professor in relationship communication at DePaul University told CNN in 2014, people who have really good relationships have similar backgrounds, values and attitudes about things they like and dislike.

"If you look at who your friends are... they're more similar to you than different," Horan said. "In general, humans are uncomfortable with uncertainty. Similarity allows us a certain level of predictability. [When situations occur], you can generally predict how your partner will react."

3. Similarity Is The Key To A Long-Lasting Relationship

A 2013 study of eHarmony’s Compatibility Matching System found that even though people with opposite personalities may be attracted to each other at first, the key to a long-lasting relationship is similarity. The study looked into the patterns of thousands of couples to find what made their relationships successful or not. While opposites may attract initially, over time their differences may lead them to attack each other. As the study found, a submissive person might be attracted to a dominant one, but ultimately, it’s better for two dominant people to be together. When two dominants clash, “they’ll do so as equals and ultimately the relationship will be healthier.”