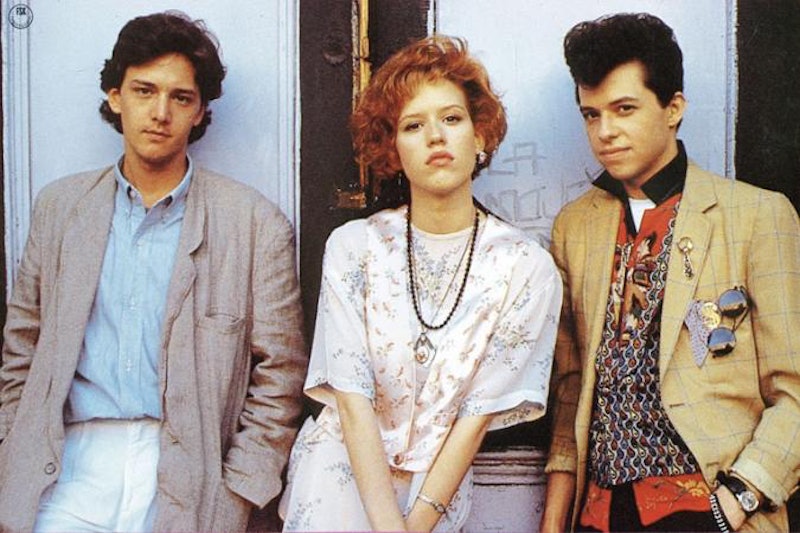 Thirty years ago John Hughes released one of the best brat pack movies of all time. Pretty in Pink hit theaters in 1986 and starred none other than the '80s queen and king, Molly Ringwald and Andrew McCarthy. Packed with teenage drama, terrible '80s hair, and one iconic pink prom dress, Pretty in Pink dove into the struggle of social classes and growing up in a low income home. Not to mention, there are some big names in this movie that you may have forgotten about.

First, a recap of the film's plot: Andie is one of the unpopular kids at her school and pretty much acts like a parent to her father, who has yet to get his life together after his wife ran out on him. Andie’s friends are her boss at the record store where she works. Duckie, her best friend, is madly in love with her. One day a popular, rich guy, Blane, asks her out, despite the overwhelming disapproval from his group of friends. The two try to navigate each other’s worlds while falling in love. Because that’s life in high school.

I sat down to rewatch the film in honor of its 30th anniversary, and I haven’t seen it since middle school. There were tons of things I never realized as a kid that I picked up now that I'm older.

Let’s be honest here, Pretty in Pink put Jon Cryer on the map. He was just starting to get into the movies in the '80s and this was his breakout moment. Now we only know him as Alan Harper from Two and a Half Men or as people who don’t watch the it know it as, the show Charlie Sheen was fired from whilst ranting about tiger blood.

Was James Spader an asshole in this film? Yes, but holy moly you cannot deny that he was a beautiful specimen of a human being in the '80s. Look at that hair! RIP to James Spader’s gorgeous head of hair.

Not to keep talking about James Spader, even though I could write an entire essay on why he’s literally the best actor ever, but the name Steff is so not a bad boy/jerk name. When I think back on this movie obviously I remember Blane, but ain’t nobody got time to take crap from a dude named Steff.

Remember when prom was literally the most important thing to happen ever? Most of us have moved on from that. Apparently Andie’s friend Iona still talks about prom and thinks about it often. Sure, adults do that all the time.

When is dating someone who has money ever actually a bad thing though? Not that you should seek it out, obviously, but I don’t know why I would be complaining about it.

7. Duckie Isn’t Even Trying To Hide His Emotions

You know those movies where someone is in love with their best friend and they keep it hidden out of fear of rejection? This is not that movie. He basically professes his love for her every time they hang out, but she isn’t listening to a single word he says.

9. Duckie Is Literally The Worst

I totally understand that he’s pretty much Andie’s only friend, but any friend that leaves me that many voicemails wouldn’t be my friend anymore. Also, who goes to someone’s work and pulls the fire alarm?

Real talk though. In what world did Blane think it was a good idea to bring Andie to that house party for a first date? In real life that would have been the first and last date.

How old is Iona? What is she doing hanging out with and kissing high schoolers?

13. Bravo For Andie Calling Blane On His Bullshit

Today, we would send a really passive aggressive text to show someone we went out with for like two weeks how we felt. She calls him out and it’s amazing.

15. The Most Important Lesson Of The Movie

This is the one line every kid still in high school dealing with jerks needs to take away from this movie.