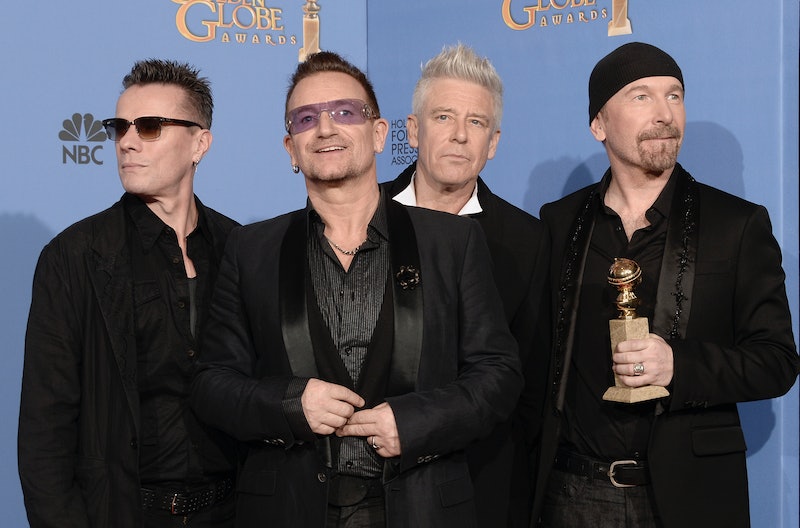 No stranger to the Super Bowl after playing the halftime show in 2002, U2 is back and this time they're giving away free music! In a special commercial during the big game, the Oscar-nominated band featured their new song "Invisible" and debuted the partnership between Bank of America and (RED) the global fund that Bono founded in 2006 to eradicate AIDS, malaria, and tuberculosis worldwide. As part of their desire to raise awareness, U2 is allowing their single "Invisible" to be downloaded for free on iTunes, and with each download, Bank of America will donate one dollar to the cause.

“We’re taking all the energy around the Super Bowl and interest in what U2′s doing and flipping it into the fight against HIV AIDS,” Bono told USA Today.

The Super Bowl commercial, shot in black and white, featured Bono and the band playing the song to an energetic crowd. It features typically inspiring lyrics that U2 is known for like:

You can watch the minute-long preview of the song here:

It's only available until midnight on Monday, so go download your copy now to help contribute to the cause.

More like this
Olivia Rodrigo’s Song Dedication To 5 SCOTUS Justices Sent A Strong Message
By Grace Wehniainen
Eurovision 2023 *Might* Be Held In The UK
By Sam Ramsden and Rachel Mantock
Mollie King & Stuart Broad Have The Most Relatable Wedding Plans
By Sophie McEvoy
For These Abortion Clinic Volunteers, Going TikTok Viral Is A Risk Worth Taking
By Audra Heinrichs
Get Even More From Bustle — Sign Up For The Newsletter