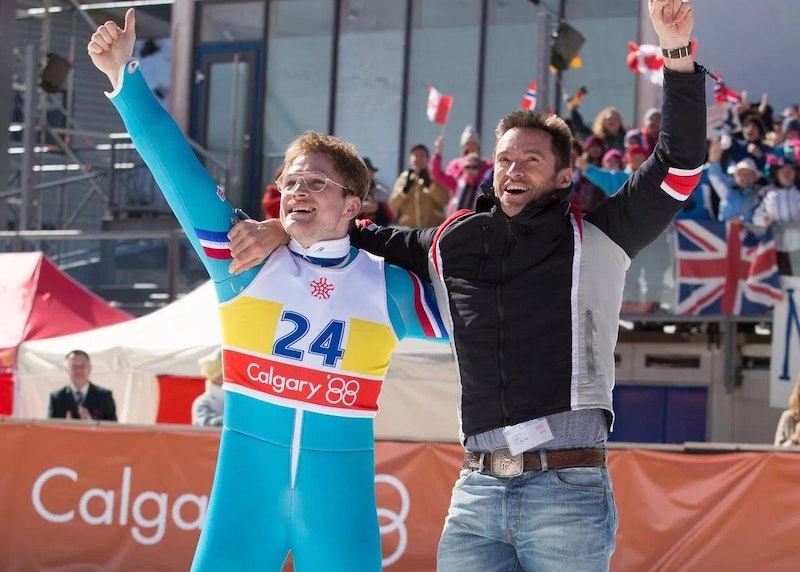 Even the most faithful biopics take a little poetic license with their subjects. For Eddie The Eagle, the fictionalized account of British ski-jumper Eddie Edwards and his bid for Olympic greatness, that license includes the manufacturing of a major character. Hugh Jackman plays the coach to Taron Egerton's Eddie in the film, and the two make quite an offbeat pair. Jackman's character Bronson Peary is an American ex-champion who initially declines to train Eddie but changes his mind when he sees just how unwavering the jumper's resolve really is. This coach plays a major role in Edwards' road to international fame in the film, but Jackman didn't have the luxury of speaking with his real-life counterpart before filming began — because where Bronson Peary is today is, well, nowhere. Peary is a character created for Eddie The Eagle, not one of Edwards' actual support team.

After deciding that his best shot for Olympic glory waited at the end of a ski ramp, the real Edwards moved from the UK to Lake Placid, New York to train. There, the ski-jumper worked primarily with two coaches: Chuck Berghorn and John Viscome. Initially, Jackman's character was inaccurately reported to be based on Berghorn and to even carry his name. That error was corrected by Eddie The Eagle screenwriter Sean Macaulay in the Adirondack Daily Enterprise in February 2015. "Jackman is indeed playing a coach," Macaulay told the paper, "but he's a fictional character called Bronson Peary." That news was just fine by Berghorn, who admitted to being "worried" when he'd heard that he would be interpreted in the film. Instead of being based on any one trainer, Peary is an amalgamation of individuals who Edwards worked with, plus a little added cinematic zing. The screenwriter called Peary "a former golden-boy skier and a burnout"; he's the stand-in for the cynical modern audiences who are about to have their hearts melted by the bespectacled Olympian.

So, no one can track down the fictional Peary to get his insights on the 1988 Calgary Olympic Games. What about Edwards' real coaches? The Adirondack Daily Enterprise reported last year that, despite being linked to Edwards' story, Chuck Berghorn "doesn't consider himself an expert ski jumping coach," but more of an expert in maintaining ski jump facilities. Berghorn still resides in Lake Placid and works in construction. His memories of Eddie "The Eagle" Edwards aren't all rose-colored. In fact, Berghorn doesn't think his training helped the aspiring jumper very much. He said:

I do remember him coming out to the ski jumps and wanting to learn how to jump. He wasn't very good, and because of his age, you couldn't really teach him anything.

Edwards' other Lake Placid coach John Viscome passed away in 1998 after a long and respected career in the sport.

Eddie The Eagle repackages a classic underdog story with a little narrative finessing. Hugh Jackman's character is the movie-friendly version of the real men who trained Edwards, reminiscent of the sports movie coach characters audiences are used to seeing, from Rocky's Mickey to Gordon Bombay in The Mighty Ducks.