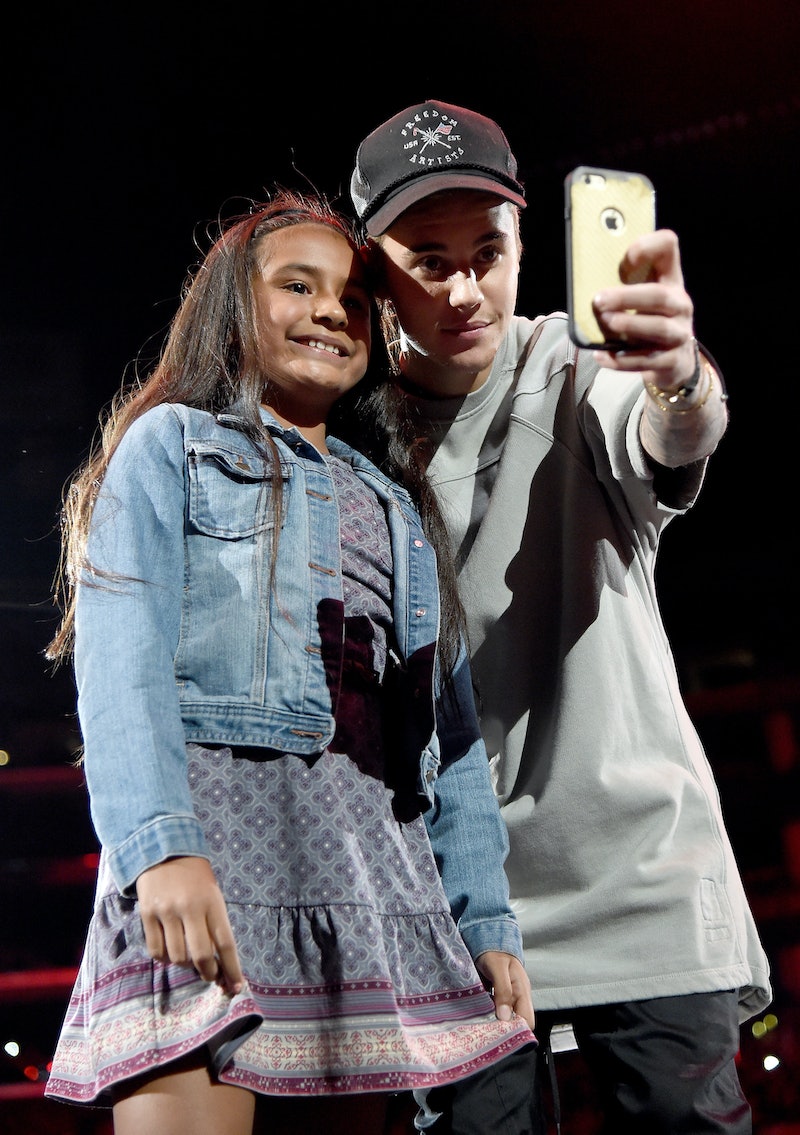 Apart from some admittedly negative fan encounters (like when he berated fans at a concert and stormed out of his show), Justin Bieber has a solidly positive relationship with fans. He has spoken repeatedly and at length about how much his beloved Beliebers mean to him, quotes and tweets and interactions that all help to reinforce and strengthen the fans' adoration of the "Sorry" singer. But that kind of idolization can be a double-edged sword, revealed the Biebs in a new interview with the Mirror. Bieber doesn't want fans to worship him, he said, because he will never be able to live up to their expectations:

I would really suggest to people, "Don't put your faith in me." Because I’m gonna disappoint you every time. Yeah. It’s scary. But I want them to know that I’m not going to be able to solve their problems… I'm not that higher power. I'll never be. I’m not perfect. I’ve made so many mistakes.

It may sound like Bieber is using this platform to give himself leeway for any bad behavior — and in 2014, there was a hell of a lot of it — but I think he actually brings up an important point about the fan/artist relationship: Love me. Love my music. But at the same time, have realistic expectations of me.

"I just want to get to a place where… I just want people to know humans aren't meant to be worshipped," he continued. "We're just not. So when a human is being worshipped, this is dangerous. ’Cause it does nothing but give you pride.

“And I feel like the fans, they gotta understand­, you can love me, you can be passionate about me, you can fantasize, you can do whatever you want," Bieber said. "But it’s a finicky thing when you start putting your trust in me. And I’ve seen certain people just break down."

For JB fans who give their all to the pop star — their time, their money, their devotion, their thoughts — it's easy to build him up to be almost a mythical being, one who will always be there for them and will save them from anything negative going on in their lives. When listening to the 21-year-old's music or interacting with the community of fans brings Bieber devotees a sense of comfort, it's not hard to see how the idea of Justin Bieber gets so intensely magnified in fans' heads.

But what Bieber is saying, and he makes a good point, is that at the end of the day he is nothing more than a human being. And while he understands that many aspects of fandom are way bigger than himself (the intense passion fans feel and even fantasizing about meeting or dating him), he's simply reminding his fan base that he's human, just like they are. He's going to make mistakes and eff up and maybe even continue to do some unsavory things, but it's because he's human. A human worthy of praise and love and affection just like any other human, but not one worthy of blind worship. It's just too much pressure to put on anyone.

To some extent, Bieber is telling fans how to be fans — and I admittedly wrestle with my own thoughts on that (who is he to tell fans how they should act? They're human beings too). But ultimately, I agree with the message that he is putting out here.

Speaking from a fan perspective, it's easy to get wrapped up in the idea that your idol can do no wrong and is the equivalent of the raised-hands-in-glory emoji. But if there's something that JB has proven time and time again, it's that he has done wrong because he's human. And he's gently reminding his fans of that fact — for as much for their sake as it is for his. He's not saying it out of malice or to disrespect his followers, but instead to reiterate the fact that he's just a person and the pressure to be anything more than that can be unhealthy — for him and for the fans.

More like this
Selena Gomez Reacts To TikTok Users Who Say She Shaded Hailey Bieber
By Grace Wehniainen
Sam Ryder Is Ignoring The Eurovision Hype, Too
By El Hunt
Joe Alwyn Reacts To Taylor Swift Earning An NYU Doctorate In A Rare Interview
By Jake Viswanath and Nicole Pomarico
Harry Styles Addresses The Theory That His New Song "Daylight" Is About Taylor Swift
By Jake Viswanath
Get Even More From Bustle — Sign Up For The Newsletter