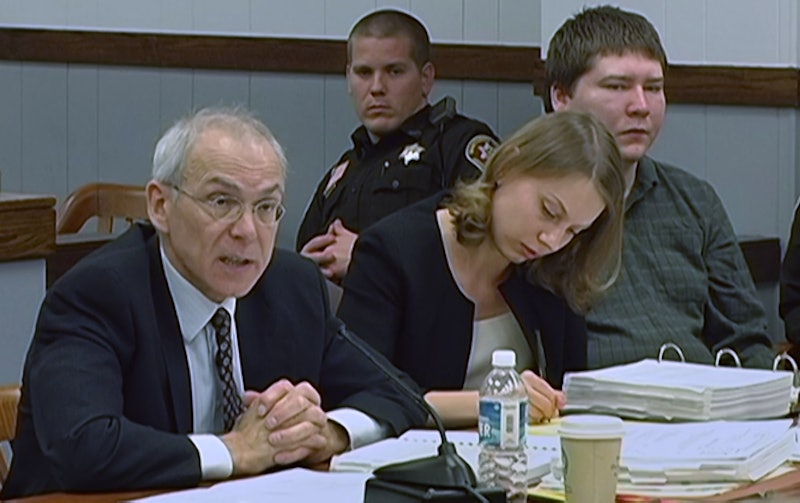 At the University of St. Thomas School of Law on Monday, Brendan Dassey's lawyer explained why she believes his confession was fabricated. On April 25, 2007, Dassey was convicted of murder and sentenced to life in prison with the possibility of parole. The Netflix doucseries Making a Murderer's portrayal of the Manitowoc County Sheriff's office's treatment of the then-16-year-old, who was on the cusp intellectual disability, sparked speculation that the interrogation leading to his confession wasn't fair to him. (The sheriff's department has long maintained that its methods were by the book.) According to Dassey's lawyer Laura Nirider, who was also featured in the series, a simple fact de-legitimizes his confession: Dassey was interrogated and perceived as if he were an adult, not a child.

Nirider began working on Dassey's case in 2010, when he was appointed a set of new lawyers. In addition to working on Dassey's case, Nirider is also currently a clinical assistant professor of law at Northwestern University and the Project Director for the Center on Wrongful Convictions of Youth. As an expert on juvenile confessions, she helped put her audience in Dassey's shoes, and maintained that the sheriff's department failed to take into account the psychological and behavioral differences between children and adults.

More specifically, she claimed that the department failed to read Dassey's body language correctly. Children, she explained, are more likely to slouch and avoid eye contact in stressful situations, but it doesn't necessarily mean that they're lying. Looking at the videos and screenshots of the interrogation, it's plain to see that Dassey's body language perfectly matches her description. That behavior allegedly supported the assumption that Dassey was lying when he claimed to have no part in the murder of Teresa Halbach.

According to Nirider, this may be an accurate association if Dassey was a fully-developed adult. Traditionally, police are taught to perceive slouching as an indication that an adult subject is lying. But at the time, Dassey was just a teenager. For Nirider, the problem lies in the possibility that law enforcement officials failed to take Dassey's age and mental capacity into account while interrogating him.

According to Minneapolis' Fox 9, Nirider also drew attention to the physical environment in which Dassey was placed during the interrogation, and insisted that it was coercive. The teen was placed on a couch in the corner of a small room. The lawyer displayed perhaps the most insight when she explained why she believes Dassey lied to authorities. She argued that he simply agreed with the allegations relentlessly presented to him by the police because he thought that by telling them what they wanted to hear, he would be set free. The possibility that Dassey simply didn't know any better further polarizes his reasoning from that of an adult.

In essence, Nirider asserts that Dassey was subject to coercive interrogation techniques and subsequent review that's traditionally more akin to that of an adult case. According to Nirider, the conclusion would have been very different if Dassey had been treated as a juvenile during the interrogations.

The possibility that Dassey was coerced into providing the confession which ultimately costed him his freedom is naturally disturbing. However, it's important to remember that his case is not singular in nature. As Rolling Stone magazine points out, many other teenagers nationwide have found themselves in similar predicaments as Dassey. In January, a little over a month before making her speech on the case, Nirider told Rolling Stone's Molly Knefel that people need to realize that Dassey's case isn't an outlier:

The tactics that you see on the [Dassey] interrogation tape are all too common. They were designed originally for seasoned adult criminals, and what you see on the tape is them being used on a 16-year-old with intellectual disabilities. As a result, you see these powerful psychological tactics designed for adults absolutely steamroll Brendan.

The same article points out that, according to a study conducted by Barry Feld (author of Kids, Cops, and Confessions: Inside the Interrogation Room), almost 50 percent of exonerated juveniles falsely confessed. Dassey's case aside, it's clear that authorities may need to take a second look at the system.