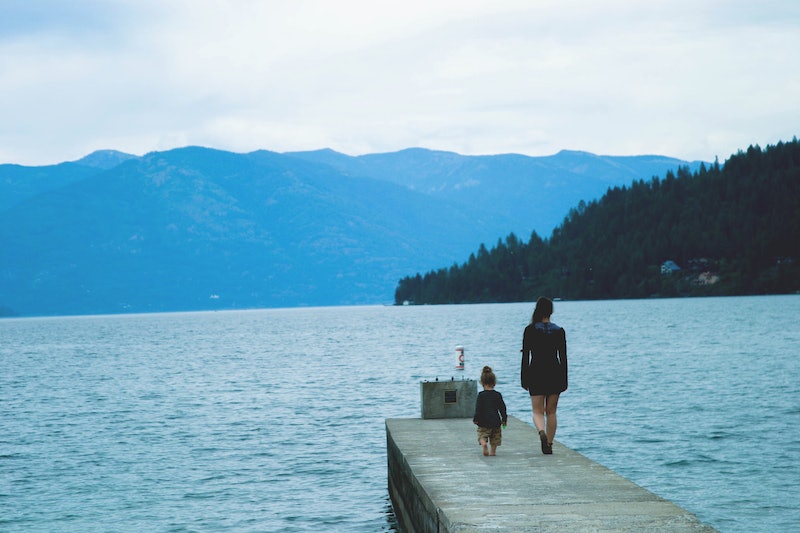 Like many women, I had a complicated relationship with my mother growing up. She was raised in Taiwan and moved to the U.S. when she was 16, and though she was exposed to American culture from an early age, she still honed in on many old cultural traditions in my upbringing — like emphasizing having good grades over having friends, or agreeing with my family when they commented I was gaining too much weight. She was a workaholic for the majority of my childhood while I lived with my grandmother, who took me under her wing.

When my mother finally picked me up at age eight and moved me to a new place in NYC, I found out she had remarried a man I could not relate to. She always took his side over mine, even though he did a lot of things that I thought were not positive for her or our family. After I went away to college, we went months without speaking. It wasn’t until then that I realized we had a strained relationship, where both of us were toxic towards each other.

My mother and I had an almost non-existent relationship for many years — and I’m not alone. According to Rabbi Evan Moffic in the Huffington Post, about 30% of women have been estranged from their mothers at some point in their life. Of course, not all of these relationships are salvageable — sometimes, parents and children are estranged for a very good reason. But other times, we become estranged from our mothers for reasons that don't have to be permanent. Eventually, I was the one who finally decided to soothe our old wounds. I guess I was tired of all the negativity we had built around each other. Here are 10 methods I utilized in my own life to lessen my strained relationship with my mother.

1. Don't Make Decisions With Your Ego

I realized early on in my life that my mother was built on pride. Practically everything she did was because of her pride — from her need to be the best at her job to the way she never let me win an argument. At first, I used to ignore my mother or just say things I knew she wanted to hear, but I realized it wasn’t helping our relationship. I still felt drained all the time.

Travis Bradberry, Ph.D., wrote in the Huffington Post that “The more irrational and off-base someone is, the easier it should be for you to remove yourself from their traps. Quit trying to beat them at their own game.” Whatever argument we get into now, I apologize first and try to be the bigger person. Because of how I was raised, in a culture where feelings were entirely dismissed, I wanted to acknowledge the fact that both of us are very prideful. When I realized how much my ego got in the way of rational thinking, it was easier for me to take the high road, and more rewarding as a result.

If you and your mother are stuck in the the same relationship dynamic that you had when you were a child, “the mother continues to be overprotective, while the grown child obeys her and avoids confrontation,” explains Seth Meyers, Psy.D., in Psychology Today. It’s easy to get caught up in the middle of a fight and want to rehash old wounds, blaming one another for their unhappiness.

But try to fight this urge. Stay present during fights. Focus specifically on the issue at hand and not at something one of you did years ago. By bringing up old wounds, you can easily increase hostility that can only damage the relationship more. But when you stick to the present, communication can flow more peacefully. I’ve applied this to my romantic relationships too, and it’s helped diffuse uneasy situations quicker.

I started saying “I think” and “I feel” as a way to communicate with my mother, which is entirely different than how I communicated before — spitefully and with brutal honesty. “Avoid sarcasm and facetiousness,” says Margarita Tartakovsky, MS, in a piece for PsychCentral. “It’s easily misinterpreted, causes hurt feelings and takes you further away from resolution.” By using "I think" and "I feel," I helped my mother listen to me and what I had to say about my feelings. Without pointing fingers at her, I now focus specifically on my feelings, rather than placing words in her mouth.

4. Keep It Between You Two

For a while, my stepfather tried to act like a buffer between my mother and me when we fought. Even my grandmother stepped in at times. It was hard not to let them get in the way. But much like in a romantic relationship, no one knows what happens between two people except them. Although your friends or family might think they’re helping you, they’re really not doing you any favors when they attempt to mediate. Try not to let other people get involved in your business. If they ask to help, you can explain to them how you understand they're trying to aid you, and that you appreciate their concern, but that they getting involved might only make things worse. Gently let them know you don't want them interfering.

5. Try To See Things From A Loving Standpoint

When I was in my early teens and my mother said I was gaining too much weight, I cried and started binge eating. I really didn’t know what I was doing — I starved myself for a day and then tore up my whole kitchen from my hunger pangs.

Years later, I thought of my mother making this comment from a loving point of view, rather than because she was trying to hurt me. It was hard for me to imagine her loving me, but the thought of her loving me and saying the things she did from a maternal standpoint gave me time to collect myself. I thought of her saying this because she was concerned about the high blood pressure that runs in the family, and didn't want me to suffer from it. I imagined what her childhood looked like, and how she was shown little emotions or affection, and how that carried over to her as a parent. When she'd command me to listen to her because she's my mother, I saw it from a loving standpoint and it helped me handle my anger better.

Social worker Dr. Allan Schwartz wrote on MentalHelp.net that “adults sometimes harbor resentful feelings about the ways they were raised. The more authoritarian and strict the environment was, while growing up, the greater the likelihood there will be a well-spring of bitter memories and angry feelings left over from childhood." Schwartz's quote resonated with me because I realized I was still holding onto so much contempt well into my early twenties, and that my mother was doing the same thing. I thought about her naturally following the way she was raised, and that it was taking a toll on her. I realized I didn't want us to be resentful towards each other any longer.

For some mothers who were taught not to show affection, the only way they know how to communicate is by being brutally honest. I realized my mother’s childhood was not as privileged as mine. I knew she grew up poor and stressed living with five other siblings. So I tried to give my mother the benefit of the doubt.

6. Find Something You Have In Common

I love trying new cuisines and restaurants, and reading and writing reviews on Yelp. My mother, on the other hand, is a complete food snob and hasn’t liked a single restaurant we’ve eaten at in NYC (of all places!) for the last decade. I realized my passion isn’t her passion, and later found out we share a love for action movies, so I focused on watching those with her instead. If you can find a way to spend time with your mother, without needing to talk, you can strengthen your relationship just by being with her.

If you tell your mother you’re going to do something, do it. When you're no longer a kid, you have more responsibility and the weight of your promises matter more. By flaking on things you will only create more distance.

I started to see my mother as someone I could take care of, and I know that’s not the case for everyone, but she would be sad and disappointed if I cancelled on her abruptly, which I used to do often. I would tell her I would meet her somewhere, and not show up, sometimes without even giving her any notice. There were times I couldn't leave my house because I was in so much anxiety over what might happen. At the time, we were often yelling in each other's faces, even publicly and causing a scene. By sticking to my promises, we started respecting one another more.

When I was in college, I was surprised to find that I missed my mom. Our relationship was stronger now that we weren’t in each other’s faces every day. Making real friends for the first time, I saw their relationships with their parents and started wanting to talk to my mother again. Bradberry also mentions that “if you set boundaries and decide when and where you'll engage a difficult person, you can control much of the chaos.” Figure out how often you want to see your mother, and whether it’s enough to give you distance but still have respect for one another. By checking in with my mother a few times a week via text, we created healthy boundaries with one another.

9. Find The Communication Medium That Works Best For You

I feel like my mother is one of many in her age range who actually enjoys texting. She prefers it over a phone call, and since I panic answering the phone, we figured out texting is the best way for us to communicate. It's important to find which communication method works best for your unique relationship. Maybe email works for you and FaceTime is ideal for someone else. You will never know until you try. There are thousands of ways to communicate now, so see what's best for both of you. If you don't, you might create more distance by not using the right words.

Though this can be a tall order for many of us, it is important you forgive each other. Even as painful as certain things have been between you two, it is imperative that you practice forgiveness if you want to move on and live your life. I’m not saying you need to have a perfect relationship with your mother, because perfect relationships do not exist — but forgiveness isn't about perfection. When you forgive someone, it means you are brave and seeking peace. Never think you are weak because you forgive. Forgiveness, if anything, is for you; it can allow you to be happy and unchained to your past. By practicing forgiveness, I was able to start anew and let things be. My mother and I now have a much healthier relationship with one another, and I am so happy we both gave each other a chance.