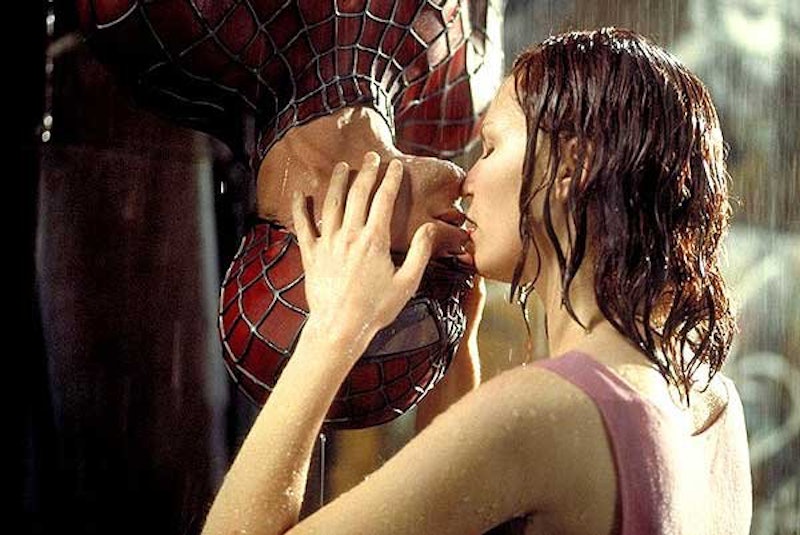 Sex scenes in movies are like pigeons in New York — there are way too many. With such a huge number of them out there, they can look strangely identical (particularly when a PG-13 rating is involved): horizontal kissing, perhaps a discreet unclasping of a bra, followed by some heavy panting sounds and an artistic shot of a strategically placed sheet. With sex scenes in every other movie, it's become harder and harder to really impress an audience. And while some films choose to play up the forbidden appeal of sex by adding nudity and upping to an R rating, like, for example, Fifty Shades of Grey, in the hopes of differentiating itself, that strategy can only take you so far. Audiences get desensitized to everything, even nudity. Which is why some of the sexiest movies don't have any.

Interestingly, not all the scenes listed below are sex scenes. In fact, most are not. The fact is that a lot of movies with sex scenes (or "love scenes" if you want to put it more romantically) feature some degree of skin, even if it's just a guy's abs or a woman's nude back. But if these 13 scenes are proof of anything, it's that nudity doesn't have to be involved for a movie scene to be sexy.

1) The Avengers — Loki And Black Widow

Loki and Black Widow have a kind of battle of the whits in The Avengers that gets exponentially hotter with every single line exchange. Something about the combination of Tom Hiddleston's dangerous accent and Black Widow's awesome confidence just makes the scene pop.

In this little-seen gem, Reeves (Oscar Isaac) reveals his longtime crush on a girl (Kate Mara) he went to high school with at their 10 year reunion when he sings a song he wrote for her. What is sexier than watching a guy poor his heart out into song?

The infamous library scene does feature a bit of nudity, but for the most part the scene is pretty nudity free. It's the chemistry between actors James McAvoy and Keira Knightly and short shots of her green dress and his hand over hers that make the scene truly sexy.

Literally anything Rochester, as played by Michael Fassbender, says to Jane Eyre in this movie is automatically sexy. I mean, look at him.

There's a scene towards the end of Ocean's Eleven when Danny says goodbye to Tess, only to secretly drop a cell phone in her coat pocket, and then he kisses her on the cheek. I don't know if it's just my overwhelming love for George Clooney, but for some reason that gesture always felt incredibly intimate.

Piano sex. Julia Roberts might be only dressed in a little slip, but she's arguably wearing more clothes in this scene than she is at the beginning of the film, so I'll let that slide.

The upside down kiss that defined romance for a generation. Does it get any sexier?

The sex scene in Nick and Norah's Infinite Playlist is sort of odd and uncomfortable, but it's also honest and unique in that the camera pans away from Nick and Norah doing the deed.

If you didn't think that Poe and Finn's scenes in Star Wars: The Force Awakens were sexy, I don't think there's anything I can do for you but cry. #FinnPoe

Joseph Gordon-Levitt dancing in the streets is pretty much my ultimate fantasy. There's just something sexy about a man that can dance.

There's not a lot of nudity in Beyond the Lights, though there is a lot of sex. However, one of the sexiest moments in the movie doesn't involve sex at all. It happens when Noni secretly cuts out her weave and shows Kaz her natural hair for the first time. The way he looks at her and smiles melts my heart every time.

Rogue and Bobby in the X-Men films were probably one of the first couples I ever really shipped in the superhero world, and this is why. Their kiss in X-2 is pretty PG, all things considered, but it's the fact that Bobby is literally risking his life to kiss the girl he loves that makes the scene totally sexy.

This version of Pride and Prejudice is technically a TV miniseries from the BBC, but I watched it as a movie growing up, and all I can say is: the lake scene. Watching Colin Firth as Mr. Darcy jump into that gross lake and emerge soaking wet (and fully clothed) is enough to bring anyone to their knees.

More like this
I'm 42 & I've Never Had Sex. Is It Too Late?
By Sophia Benoit
What Makes A Sally Rooney Sex Scene So Hot?
By Samantha Leach
Lisa Marie Presley Reviewed Baz Luhrmann’s ‘Elvis’ Movie On Twitter
By Grace Wehniainen
Here's How To Stop Being Codependent In Your Relationship
By Madeline Howard
Get Even More From Bustle — Sign Up For The Newsletter