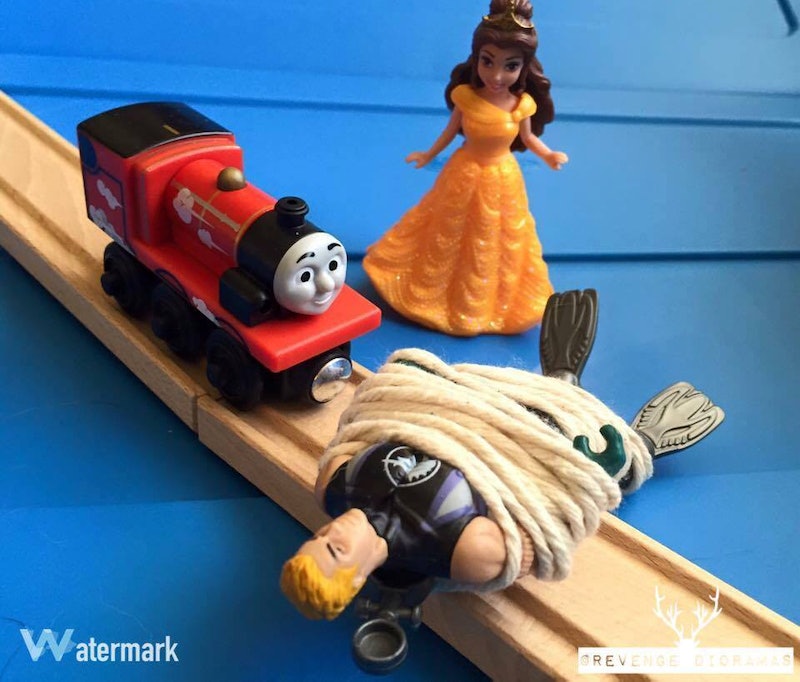 Breakups are pretty terrible, no matter what terms you end on. Separating from a person you love — even if there's an excellent, logical reason — is likely to bring even the most stoic person to tears. Or anger. For artist Laura Stokes, there's a lot of anger, so in her art project Revenge Dioramas, she creates darkly funny scenarios where her exes meet their proverbial makers. Of course, not her literal exes; Stokes uses toys to create her bizarre and hilarious scenes. As she told Mashable (and as is apparent in many of the captions for her photos), the crazy scenarios are not all from Stokes on life. Sometimes it's a story of a friend's mistreatment or breakup that inspires a photo, while other times she creates her art in response to what's happening in the news, like the #FreeKesha movement.

While this project has the potential to... shall we say, not exactly be everyone's cup of tea, personally, I think it's great. Women in general, including women artists, have little room to experience and convey anger, even though anger is in fact a healthy emotion which everyone experiences at one point or another. In truth, women are often criticized for not conveying their anger correctly, and in fact are taken less seriously when they portray anger. To me, this is rooted in negative gender norms which designate women as people who should be seen and not heard, meaning that women traditionally have minimal room to express their emotions, including anger.

I think Stokes' project is a really cool mix of feminism, art, and humor. She now has a Patreon to raise money for new materials for future projects, too, so if you want to see more from her, you can kick in a few bucks to help out. Check out the ongoing Revenge Dioramas project on Facebook or follow it on Twitter; and in the meantime, here are a few of my personal favorite pieces, along with their captions:

In Support of Kesha

This one is for Kesha. She deserves so much better, doesn't she? Kesha needs a vengeance-seeking angel like nobody else right now. So in thinking about that, we turned to one of the toughest badasses of mythology: Medusa. Beautiful, terrifying and absolutely giving no f*cks about mortal man. ... You deserve justice!#FreeKesha

In Response to Ridiculous Tinder Sexism

Someone creeped on a friend of mine on Tinder — she was just chatting to him casually and he suddenly started asking for her bra size. After he guessed her size, he commented, "Sunny side up!" BECAUSE NOTHING TURNS A WOMAN ON MORE THAN BEING COMPARED TO SLIMY COOKED EGGS.

Calling Out The Hypersexualization of Women of Color

Here's one for all the women of color out there dealing with the gross behavior from white guys on dating sites. A friend told me about a guy named Eddie creeping on her, and when she let him know she wasn't interested, EDDIE KEPT GOING.At one point he said, "Actually, I'm pretty much only attracted to black women, and like being an obedient white boy. (If ya know what I mean.)"EDDIE, SHE KNOWS... SHE JUST DOESN'T GIVE A F*CK.

Be sure to check out Stokes' full project at her Revenge Dioramas page! And if your significant other ever annoys you just a little too much, feel free to pass the story along to Stokes and see what she creates with it. It just might make you feel better.

More like this
The Most Compatible Life Path Numbers, According To Numerologists
By Kristine Fellizar
How To Fight For Reproductive Rights, Based On How Much Time You Have
By Courtney Young
What Is "The Ick?" The TikTok Dating Term, Explained
By Courtney Young
The 3 Most Compatible Matches For Life Path 1s
By Kristine Fellizar
Get Even More From Bustle — Sign Up For The Newsletter