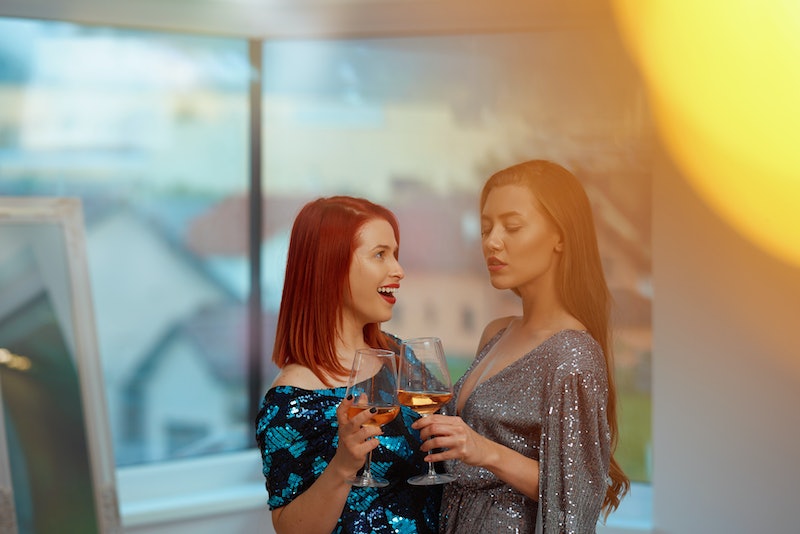 Your friends seem like they should be the last ones to slut shame you; unlike family, they're unlikely to be creeped out by the thought of your sex life, and unlike partners, jealousy isn't usually a factor. Unfortunately, though, that's exactly what makes it easy to miss the signs your friends are slut shaming you, even though it's something that happens to all of us at some point. There are the overt examples — criticizing the way you dress, attributing assault to your sexual history, and so on — but often, we slut shame each other in ways that may fly under the radar, especially if it's coming from someone you trust.

After all, even the staunchest, most inclusive feminist falls prey to slut shaming every once in a while — that's the insidious thing about it. In the end, we're all raised in the same society, and that means we're subject to the same influences unconsciously conditioning us to slut shame each other. Research has shown that girls start getting punished for having sex as early as sixth grade, and it only gets worse from there. The important bit is to recognize the ways we slut shame each other when it happens and try to avoid it in the future.

So if your friends behave in any of the following ways, it can't hurt to give them the benefit of the doubt at first; chances are you've done some similar things in the past. On the other hand, healthy friends don't make a habit of slut shaming each other — if your friend spends more time criticizing you than not, it might be time to reevaluate their importance in your life.

1. They Side-Eye Your Number Of Partners

One of the most basic causes of slut shaming is the idea that there's a "right" number of sexual partners, and in a not-so-shocking turn of events, that number is usually pretty low. If your friend criticizes your sexual history for featuring too many partners, it's pure and simple slut shaming.

2. They Warn You Away From Their Friends

If someone makes a point of warning you off of mutual friends because they "don't want things to get weird," they're implying you can't control yourself around people you're attracted to. (Or that you're so sexy everyone is desperate to get into your pants, which is entirely possible.)

3. They Police Your Outfits

Policing the way someone dresses is one of the foremost examples of slut shaming, but it still happens with alarming regularity, even from friends.

4. They Criticize You For Casual Sex

This can take any number of forms: Side-eyeing the success of your Tinder account, making one too many "jokes" about your friends-with-benefits arrangement, and even outright telling you casual sex is gross. It's not for everyone, but your friend's discomfort with casual sex has no bearing on your own decisions.

5. They Assume You'd Never Turn Someone Down

Some friends may totally embrace your sexual history, but this gets into dangerous territory when they start making assumptions about your future behavior. If they make a big deal every time you turn someone down, chances are they think you have no standards, and that's a dangerous road to walk down — if they think you'll always say yes, their idea of consent may be pretty unclear.

One of the most insidious forms of any kind of shaming takes the form of "concern trolling." In the case of slut shaming, this is when someone claims they're in favor of sexually liberated women, but they use concerns over STDs and sexual assault as justification to look down on someone for having sex. Of course, most legitimately are concerned about their friends' health, especially if they're having unsafe sex; in that case, concern is part of being a good friend. However, other people — especially those you don't know well — may use the guise of concern as a way to police your sex life, and that's nobody's business but yours and your partners'.

More like this
Here’s How To Reignite The Spark In A Sexless Relationship
By Vanessa Marin
Sandra Bullock, Girlboss Extraordinaire
By Matt Harkins & Viviana Olen
4 Most Outspoken Zodiac Signs
By Kristine Fellizar
How To Use Circle, Twitter’s Version Of Close Friends
By Emma Carey
Get Even More From Bustle — Sign Up For The Newsletter