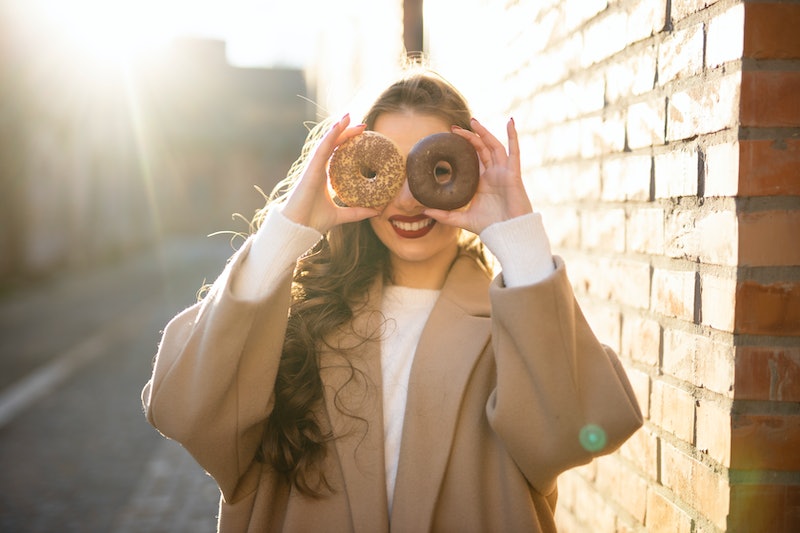 If anyone ever tells you that chocolate isn't good for you, well, send 'em packing. You don't need that kind of negativity in your life. Besides, they'd be wrong anyway. According to a new (and apparently the best ever) study, eating chocolate might make you smarter. By that measure, I'm clearly a genius. The study was published in the journal Appetite, and outlined the data backing this theory. (Not the theory that I'm a genius — the theory that chocolate boosts brain power, natch.)

Researchers analyzed data from a Maine-Syracuse Longitudinal Study in which roughly 1,000 people between the ages of 23 and 98 logged factors such as dietary intake, cognitive function, and cardiovascular risks. A second analysis was then run to corroborate the findings. What they found (and what people everywhere will undoubtedly cite from now on every time a hankering for a hunk of chocolate hits) is that eating chocolate regularly correlates with better cognitive function — a sharper memory, keener reasoning skills, and a bevy of other brain-boosting benefits.

The researches posit that we have the cocoa flavanols found in chocolate to thank for such seriously fantastic side effects. These little champs are found in particular abundance in dark chocolate, which ranges from 30 to 70 percent cocoa. Milk chocolate is lower on the list, with only seven to 15 percent cocoa, but whatever. It's still better than if you weren't eating any chocolate at all, right? I fully intend to continue eating the heck out of it.

If by some freak chance you are not as passionate about all things chocolate as I am, you can also score some flavanol action in other foods, such as apples, pomegranates, blackberries, and red grapes. ICYMI, red grapes make red wine, and red wine also has a bunch of proven health benefits. So the world just holds so much promise in this moment, doesn't it?

Just in case you needed any further provocation to consume that holiest of sweet treats, here are but a few other benefits of eating chocolate.

1. It's Good For Your Heart

In a nearly decade-long Swedish study of more than 31,000 women, it was established that those who ate at least one serving of dark chocolate per week reduced their risk of heart failure by as much as a third.

You couldn't pry a bar of chocolate from this lady's hands when she was pregnant. And why would you want to? Not only would you have been risking death and dismemberment, but you would also have been depriving me of the stress-lowering capabilities of said chocolate. Plus, according to one Finnish study, moms who ate chocolate during pregnancy gave birth to happier babies.

3. It Helps Stave Off Cancer

Studies have lumped chocolate in with other superfoods that help fight cancer, including blueberries, garlic, and green tea. The scientific explanation for this is that chocolate inhibits cell division and reduces inflammation. BAM, science!