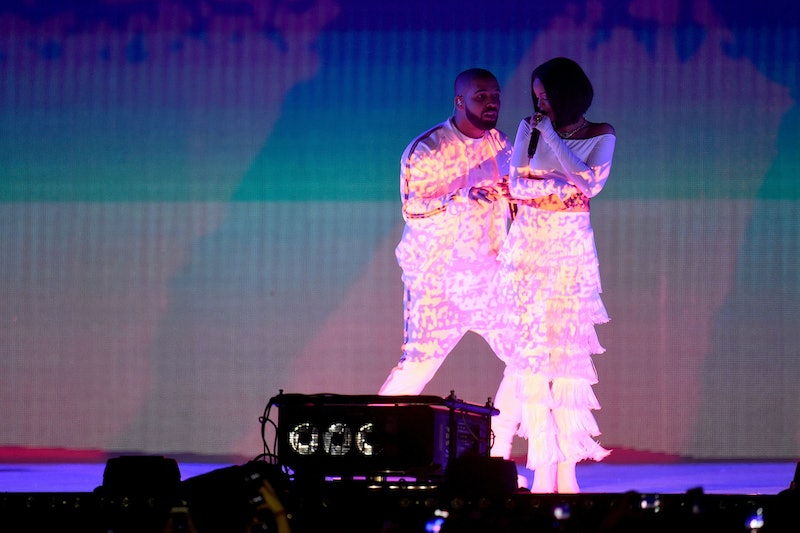 If you tuned into Rihanna's majestic two-part video for "Work" and didn't find yourself immediately joining the "When Will Drake And Rihanna Become The Power Couple They Were Destined To Be?" club, you seriously need to chiggity-check yourself before you wriggity-wreck yourself. Have you done it? OK, good — now that you're totally invested in the Drake and Rihanna 'Shipping Fan Club, I can bring you Drake and Rihanna's performance at the Brit Awards, which will make you 'ship them even harder than you already do (because you're smart and your probably get that they are soulmates, right?).

Following much anticipation, Rihanna released the "Work" video Monday, Feb. 22 — and, of course, there was much rejoicing throughout the land. But, perhaps the best part of the video was the seductive dancing it involved. Of course, the chemistry was palpable, considering the duo have an on-and-off-again relationship (which, though it's tough to keep up with, Bustle's own Jamie Primeau was happy to detail chronologically). Regardless of where the entertainers' relationship actually rests these days, their performance at the 2016 Brit Awards really, really, really, makes me hope for a beginning of the Drake and Rihanna power couple.

The following are the reasons the video made us all 'ship a union between Riri and Drake more than we already did.

These costumes say "we coordinated this shiz seriously and we are flawless," and maybe also that Drake plays tennis.

Never has a couple grinding on each other gotten me that excited. Someone douse me with some cold water because I'm about to pass out.

Surely Riri wouldn't be rocking such a big smile if she wasn't ecstatic she got to perform with her soulmate. Right?

Look how happy they are! I mean, I know they are performers and are supposed to look happy when they are on stage... but that seems so genuine! Even though Drake isn't looking at the camera, you can still tell he's smiling. That's how big his smile is. Just look at the cheek bones for a hint.

He's covering his forehead with his hand like he's checking his temperature because he's losing it. At least we know Drake is probably down with a Rihanna and Drake romance.

Again, I know they are just entertainers, but the way Riri grabbed Drake's shoulder, I totally felt the heat.

7. When Drake Bowed Down

Rihanna deserves a man that supports and respects her. Literally bowing down to the queen that is Rihanna screams support and respect.

Only Rihanna and Drake really know what's going on with their love life, but I'm hoping/praying that these two get together. Hip hop could always use a new power couple, and the position's got "Drihanna" written all over it. You can watch Rihanna's entire performance at the 2016 Brit Awards including "Consideration," her collaboration with SZA at the link below.