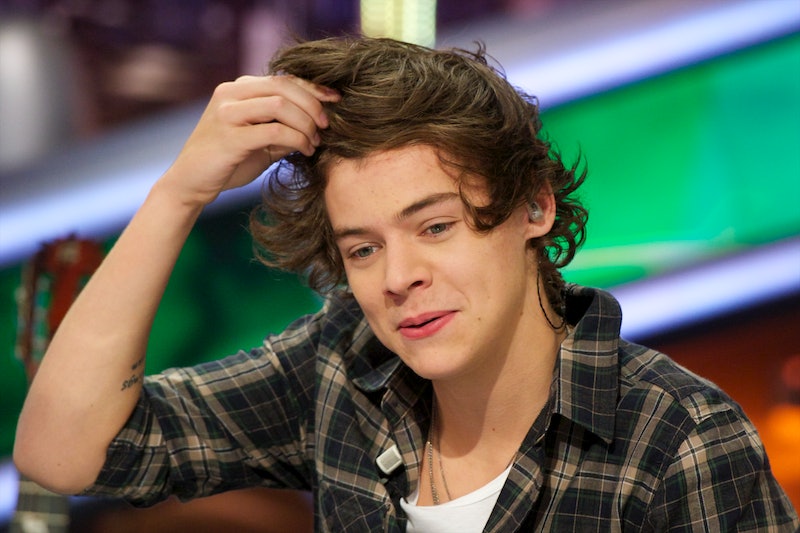 We —as in me and you— may be iffy about his smattering of his seemingly disconnected, stick 'n' poke-looking tattoos, which cover his body. But one thing we likely agree about is the perfection that is his hair! Harry Styles' hair, the length of which fans have been feverishly discussing, is something to marvel at. The One Direction hunk has steadily evolved from the sideswoop that wasn't too Bieber-like to his current shaggy style. Along the way, Styles, now 22, has dated a singer (Taylor Swift), a Jenner (Kendall), and copied a Rolling Stone (guitarist Keith Richards, during a 2013 phase!) But the singer's hair constantly morphs and he often culls inspo from himself, mashing up old "Styles" with new.

Styles has mastered that slightly disheveled, a bit rumpled, and just rolled outta bed coif style. He's been rocking a shoulder-skimming shag of varying lengths as of late. But it doesn't really matter how long or short the singer goes with his strands. He always looks darling and effortless, like he spent no time thinking about or styling his hair. So, yeah, his follicles are the epitome of "I woke up like this."

But it's time for us to take a long look back at Styles' fabulous locks. Try not to overdose on all of this cuteness in one place.

When One Direction first arrived on the scene, Styles and his hair were already precious. Look at the perfectly sideswooped, poufy coif. It fell in line with dude hair trends in 2010.

So. Much. Hair. Styles' owned that clean sweep and he was all about volume back in the one-oh. It resembled an asymmetrical bob.

In 2011, Styles and his bandmates were dapper. He and Liam Payne had the biggest hair. Styles' was a bit longer in length, though.

2012 was Styles' year. 1D were blowing up and he was dating Taylor Swift. He had to have perfect hair and he did. He ditched the side swoop and embraced shorter, curlier locks.

Anyone else getting weak in the knees? Look at how those curls perfectly framed that precious face in 2012.

Why? Because you could see more of his face and flawless forehead in 2012.

He has always had that delightfully disheveled look. But by 2012, it was a look he mastered.

Sorry, but this was too cute not to include.

It's like the wind existed merely to blow his hair in and out of place.

Styles rocked variations of this boyish look throughout 2012.

A blown-back style, like this one he wore in 2013, is always good because it means we can see more of that face.

12. The Blowdryer Is His Friend

But it still framed his face at times.

Accessories can be fun and add dimension.

15. Shorter But Not Shorn

Styles embraced his curls in 2013 and went shorter but not shorn.

Another gratuitous curl shot from 2013.

Remember what I said about the blowdryer? Check out how his curls were blown out into waves... flawless waves.

Okay, yeah, this was the Keith Richards' phase in 2013, when he was rocking headbands, bandanas, and accoutrement. Plus, I love this photo for that goofy grin mixed with cool hair.

He was gloriously shaggy and with a length that demanded a man bun.

There is nothing wrong with accessories! He could roll out of bed and go, thanks to this stylish topper.

He looked amazing with his extra long hair in 2014.

That's why he was touching it.

No polish, no problem in 2015. Check out the definition of those ends. Those CURLS!

He may be a boy bander, but Styles looked every inch the lock star, er, rock star with long locks in 2015.

Don't you wish you could run your fingers through Styles' strands?

His 2015 length totally suited him.

That was a lot of Hazza hairstyles. Or Hazza Styles.

More like this
Zendaya's Hair Evolution, From Bobs To Box Braids
By Paris Giles
All The Early 2000s Hairstyles Rihanna Wore In A$AP Rocky's "D.M.B." Video
By Olivia Rose Ferreiro
Millie Bobby Brown's Blonde Hair Is Very Britney Spears Circa 2002
By Paris Giles
8 Knockout Beauty Looks From The 2022 Billboard Music Awards
By Audrey Noble
Get Even More From Bustle — Sign Up For The Newsletter