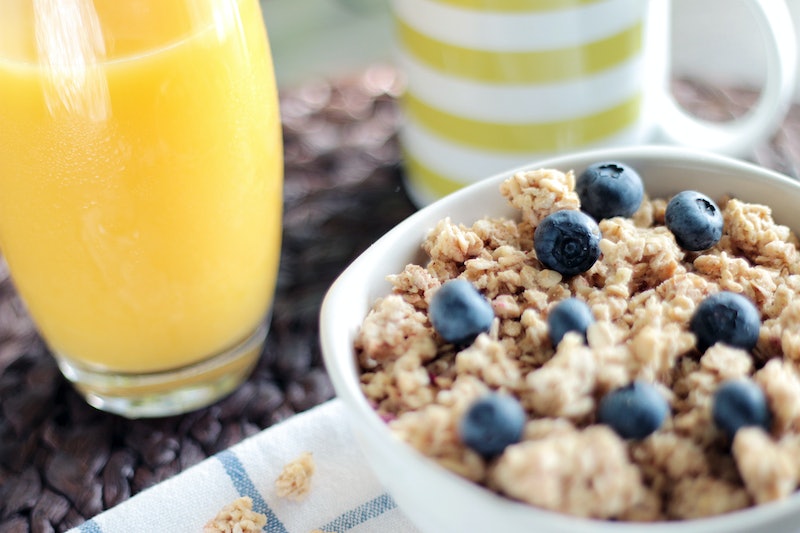 One might think that if there's anything that's a staple in the American diet it's breakfast cereal, but it turns out that this classic food may be in danger. As it happens, Millennials don't like cereal, claiming it's too "inconvenient." Say what, now?

Apparently, cereal's popularity had been in decline for a long time, since the 1990s. And if the industry was hoping for younger consumers to stage a comeback, they might be out of luck. The New York Times reports that 40 percent of Millennials think cereal is "inconvenient." At first glance, that pronouncement seems absurd — after all, what could be easier than pouring cornflakes and milk into a bowl? But it seems that it's not the assembly people object to; rather, it's the clean-up. I guess washing a bowl is just too difficult? Or... something?

Here's the thing, though: When you stop to think about it, the whole thing isn't actually as absurd as you might think. I'm going to go out on a limb and suggest that maybe washing a bowl sounds inconvenient for some reason other than just laziness — and, in fact, that the big picture shows how not lazy most Millennials actually are.

After all, the idea that Millennials are lazy is pretty well debunked by the fact that American workers today work not just more hours per week than almost any other country, but more than Americans have ever worked. In fact, full time employed adults in the United States report working an average of 47 hours per week. Plus, the American workforce today is more productive than ever, which presumably means we're working harder, too, even though there has been no corresponding rise in wages.

Since Millennials are now the largest generation in the United States workforce, it's really kind of silly to argue that we're lazy. This hasn't stopped people from making that argument, alas, but the point still stands.

So why don't Millennials want to wash a bowl?

Well, my guess is it has to do with the aforementioned long work week. Sure, washing a bowl seems pretty simple in theory, but when you've just worked almost 10 hours straight, plus a commute, you probably just want to crash. So the idea of getting up off the couch to wash out a bowl just seems, well, inconvenient. After all, cereal is supposed to be easy, simple, uncomplicated. So why does it require this extra effort when instead you could have just had a few protein bars?

Or maybe Millennials just really hate dishes. For one thing, Millennials often live with roommates (thanks to the high cost of living and stagnant wages, most of us can't afford our own place), meaning a sink full of dishes is often a deceptively fraught situation. And for another, everyone hates doing dishes. I mean, deep down, do we not all find doing the dishes to be massively inconvenient? Why else were dishwashers invented if not because doing the dishes sucks? By the way, does anyone want to buy me a dishwasher?

Still, the fact remains that cereal is now apparently on its way to being endangered. This could mean that the industry will try to lure us back by coming up with fancy new brands, which could be cool; or, maybe they'll try to push more of those "cereal bars" that I remember from my childhood. Or it could mean that they will eventually start discontinuing some of your old favorites if they aren't selling well enough anymore. So even if you find cereal inconvenient, it might be time to eat some while you still can. After all, if there is one thing our generation unquestionably does do well, it's nostalgia.