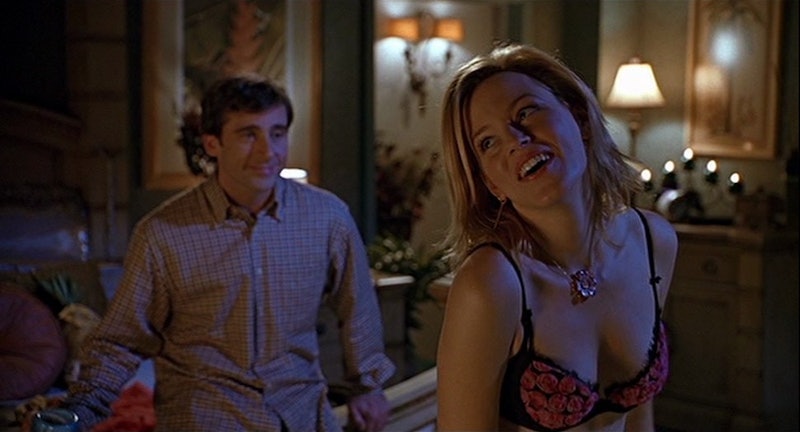 Let's get real: sex is a completely natural and beautiful part of human life, but it can also be really weird and awkward. Movies tend to emphasize the more glamorous side of human sexuality, featuring sex scenes in which stunningly beautiful couples fall into bed and make passionate love without a single hair ever falling out of place. Unfortunately, in real life this isn't always how things go down when you're getting down. Sex can be great, but it can also be a lot of awkward fumbling. But don't fear; there are plenty of weird movie sex scenes that catalogue these types of sexual experiences as well. And while it's not necessarily always pleasant to watch two characters having an uncomfortable sexual encounter, it can make you feel better about any of your own sexual misadventures. And sometimes, it can actually be a good laugh.

Of course, there may also be some sex scenes that are just too much, and that you might struggle to get out of your head for quite a while after the images have left the screen. But again, you can take solace in knowing that you're neither the character having the sexual interaction onscreen nor the actor filming said interaction on set in front of a full crew. So take a look at some of the weirdest sex scenes in movies, and be glad that you had no part in them.

The closing credits of Bridesmaids feature a homemade sex tape by Melissa McCarthy's character and Air Marshal Jon, in which she entices him with a "bear sandwich." I'm all about sandwiches, but this scene tends to make me lose my appetite.

Although there's technically only one sex scene in The 40-Year-Old Virgin, there are plenty of weird sexual encounters prior. For example, the girl who tries to suck on Steve Carell's big toe only to end up getting kicked in the face.

The weirdness commences when Veronica (Christina Applegate) starts moaning in Spanish, and continues as she and Ron Burgundy are transported to an animated "Pleasure Town."

4. Requiem For A Dream

The original puppet sex scene in Team America (which included a lot of oral sex and, uh, bodily fluids) had to be greatly trimmed down in order to avoid an NC-17 rating from the MPAA. That being said, even the edited version of two puppets going at it is a little bizarre to watch.

Ever heard the phrase "vagina dentata"? No? Then this entire movie will be a weird, weird treat.

As if pregnant sex isn't awkward enough, Seth Rogen's character makes it even more awkward when he expressly states his fear that he might poke the baby with his penis.

The butter scene in Last Tango in Paris never gets any less weird, particularly when you take into account the fact that actress Maria Schneider later revealed that she felt she was manipulated into participating.

Michael Cera's character and his crush have an uncomfortable almost-sex scene, punctuated with awkward drunken comments. It ends when she vomits on the bed.

So although cinematic sex is often depicted as effortlessly glam, these scenes definitely break the mold and are also a good reminder that sex can be just as weird onscreen as off. So go ahead and laugh, cringe, and look away as needed.

More like this
Why The '365 Days' Sex Scenes Are Good, Even If The Movies Aren’t
By Arya Roshanian
16 Ways To Jazz Up Your Tinder Bio This Year
By Lexi Inks
Daniel Radcliffe Is Shirtless In The New Trailer For His Weird Al Yankovic Biopic
By Jack Irvin
Lisa Marie Presley Reviewed Baz Luhrmann’s ‘Elvis’ Movie On Twitter
By Grace Wehniainen
Get Even More From Bustle — Sign Up For The Newsletter