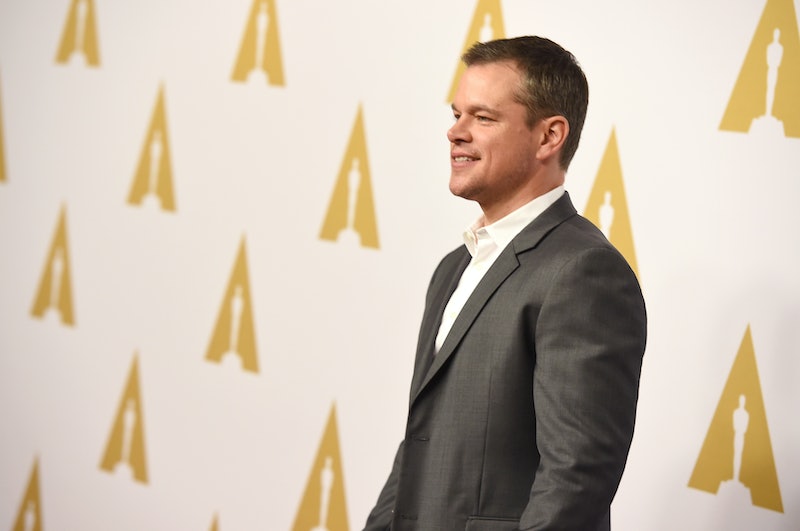 Earlier this year when the Angelina Jolie-Pitt-directed drama By the Sea was released, it was revealed that Jolie-Pitt was the first female director that her husband Brad Pitt had ever worked with. Yes, that’s correct —despite starring in tons of films, the first time Pitt had ever been directed by a woman was by his own wife, at age 52. Sadly, Pitt isn’t alone in his scarcity of female-director experiences. As a new Cosmopolitan examination points out, there are actually many leading men who have never worked with a female director in the entirety of their careers.

As the Cosmo piece details, the top 100 leading men in Hollywood contain 20 who have never worked with a female director before. Some of them, like Sean Connery, Jon Voight, Clint Eastwood, and Tommy Lee Jones, are from an earlier generation of actors, for whom the fact is less surprising. But other names are quite shocking to see on the list: Matt Damon? Orlando Bloom? Daniel Radcliffe?! And even for the men that have worked with female directors, the statistics Cosmo unveiled are still mind-boggling; Shia LaBeouf spent a few days sitting in a movie theater watching his entire 28-film oeuvre and only one of those movies was directed by a woman.

So who’s to blame here? The actors for their choices, or the industry in general? It's no secret that the lack of female representation in the director’s chair has gotten out of hand, to a point where the Equal Employment Opportunity Commission has launched an investigation into the unfair practices and sexism that plague Hollywood. Who or what is exactly to blame may be any number of combinations of elements, but one definite cause of the discrepancy is the idea that leading male actors simply have no interest in working with female directors.

Look, it’s easy to say that the actors on the Cosmo list are simply making choices to sustain their own careers, willing to take jobs when they are offered regardless of who the director is. But I think that’s letting these actors off the hook. I’m sure that most of these men are not intentionally sexist or flat out refusing to work with female directors, but claiming ignorance isn’t a “get out of jail free card,” either. There’s no way that these actors aren’t aware of the situation plaguing female directors or are just rolling with the offers regardless of who's working behind the camera. They’ve all gotten to the point where they’re successful enough to choose their projects to their liking.

“If you have green-light power and you're not being sure you're directed by a woman, you're making a deliberate choice,” director Lexi Alexander told Cosmo. When leading men repeatedly choose to work with male directors, it’s saying something more than just ignorance of the problem; they’re purposely ignoring the issue because it doesn't affect them, which can be just as damaging as outright refusing to work with women directors at all.

Although some male actors reportedly do just that. “Once someone said to me: “We really wanted you to direct this movie, but ‘anonymous male action star’ refuses to be directed by a woman," Alexander told Cosmo. Added director Catherine Hardwicke, "I have been flat-out told, in some cases, that the actors want a guy directing.” So while some actors may simply lack the initiative to collaborate on a film with a female director or don't quite realize the harm in what they're doing, others, these filmmakers claim, keep women out intentionally.

Thankfully, there are some male actors who are joining the cause. As David Oyelowo told Cosmo, "I've had to actively pursue working with female filmmakers.” The result of this determination was that he has acted in films directed by women five times in a row. "I know those guys have missed out on something," Oyelowo said. "We've all seen those careers, where an actor is on a hamster wheel, churning out similar performances and doing similar kinds of roles. I can almost guarantee that some of their best performances have not been realized because they haven't varied the gaze that they have been under as an actor."

Peter Sarsgaard, meanwhile, told Indiewire in 2014 that he “Wouldn't mind just being directed by women for the rest of my life.” Let’s hope that some of Oyelowo and Sarsgaard’s commendable initiative rubs off on some of their fellow leading men soon.

More like this
Beyoncé & Madonna’s “Break My Soul” Remix Honors A Group Of Black Icons
By Stephanie Topacio Long
Gassed Up Promises All Things Action, Risk, & Redemption
By Frances Stewart
Revisit 1992’s 'A League Of Their Own Cast' Photos After The New TV Series
By Grace Wehniainen
'The Capture' Is Finally Back – & S2 Looks Tense AF
By Sophie McEvoy and El Hunt
Get Even More From Bustle — Sign Up For The Newsletter