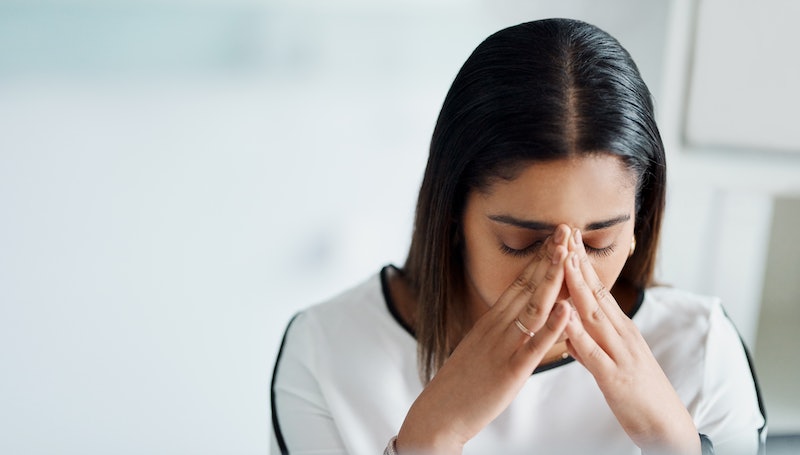 We're all guilty of slut shaming at times; it's a byproduct of living in culture that conditions us from birth to devalue women who enjoy sex. Unfortunately, it often comes from people you know — friends, family, and acquaintances. Most of the time, this can be resolved by pointing out the problem, but what do you do when your boss is slut shaming you? Although workplaces aren't usually the place to discuss anyone's sex life, it's more common than you'd think.

Of course, the overt instances are likely to get someone fired; if your boss disparages your sex life or outright calls you derogatory names, that's definitely grounds for sexual harassment. However, slut shaming is frequently more subtle, especially in the workplace. There are the oft-cited examples: Criticizing someone for dressing too provocatively, implying that a survivor's sexual history is to blame for their assault, equating virginity with purity, and so on. These kind of behaviors stop just short of calling the person in question a slut, but they certainly heavily imply it. They're grounded in the belief that a woman (or, less frequently, a man) who has sex is somehow less deserving of respect than one who remains "pure."

Although your sex life is certainly none of your boss's business, no workplace is perfect (unless you work from home and your only coworker is a cat). Keep an eye out for the following signs your boss may be slut shaming you.

1. They're Overly Invested In Your Sex Life

Some bosses have a better rapport with their employees that others, and certain environments are more conducive to talking about your sex life than others. If you work on Wall Street, you're probably not going to talk about how your date went last week, while someone who works at a women's magazine might be totally open about that kind of thing. However, if your boss asks invasive questions about your sex life and uses that information to criticize your character, they're definitely crossing a boundary.

2. They Criticize Your Clothes Outside The Office

It's one thing to look professional in the workplace; there's a time and place for glittery bodycon dresses, and your office at 9 a.m. probably isn't it. That being said, your boss has no grounds to criticize what you wear in your off hours. If you want to wear glittery bodycon at 9 a.m. at the coffee shop down the road on your day off, you're totally free to do so.

3. They Question Your Living Situation

If you live with a partner you're not married to, chances are you're intimately familiar with people judging your living situation. It's none of your boss's business whether you're planning on getting married or "living in sin" for the rest of your days; that's between you and your partner alone.

4. They Judge You For Flirting

For many jobs, flirting is harmless way to build a rapport with people; if it happens to end in a big tip or commission, it just means you're doing your job well. Much like your outfit, flirting is hardly a declaration of intent, but many people take it as an opportunity to make assumptions about your sex life — and your character.

5. They Give Unsolicited Advice To Tone Things Down

This is known as "concern trolling," a.k.a. using the facade of concern to judge someone's behavior. If your boss tells you to start dressing more conservatively or stop flirting because they're "worried it will affect your career," they're just perpetuating the tightrope women have to walk between being seen as too feminine (and by extension, too sexual) and too masculine. Plus, it's super patronizing.

6. They Assume You Use Sex To Advance Your Career

OK, so this isn't quite slut shaming, but it is something too many women experience. Even after decades of supposed equality in the workplace, the perception persists that women advance their careers using their looks rather than, say, their intelligence, ambition, and hard work. Research has even shown that attractive women are seen as less competent and less authoritative than men when applying for positions of power. In short, a woman's worth is equated with her sexuality, but as you can see above, we punish them for owning it. Talk about mixed messages.

More like this
5 Crystals To Manifest More Money
By Megan McCarty
Sandra Bullock, Girlboss Extraordinaire
By Matt Harkins & Viviana Olen
Here’s How To Deal With Sexual Frustration If You Don’t Want Casual Sex
By Annakeara Stinson and Mackenzie Sylvester
Here’s How To Reignite The Spark In A Sexless Relationship
By Vanessa Marin
Get Even More From Bustle — Sign Up For The Newsletter