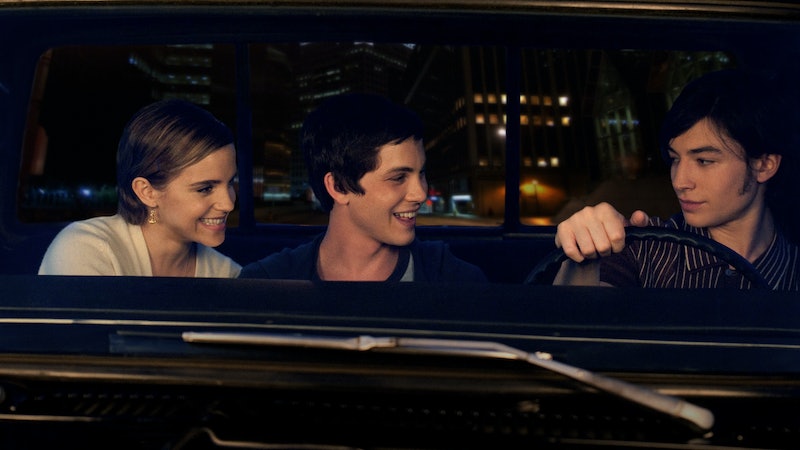 When I stopped believing in God after almost 20 years of being raised as a Christian, I felt like I lost a lot of things. I lost a sense of meaning or purpose to my life; I lost my feeling of unity with the world; I lost my infinity. I remember watching my mum and sister laugh over a board game, and feeling totally uncompelled to join them. “Why even bother?” I thought. “We’re just going through the motions anyway, and then we’ll die.” Yeah, I wasn’t in a great place. But then I read The Perks of Being a Wallflower .

You see where I’m going with this, right? You know which line I’m talking about. In one of the most oft-quoted (and oft-tattooed) scenes in the book, the three main teenagers are in the car, and there’s this wonderful moment when a song comes on just as they see the city lights, and they all laugh, and Charlie says this iconic quote: “And in that moment, I swear we were infinite.”

I read that line — and for the first time in months, I looked at the world as something I could be a part of again.

If that sounds super-cheesy and/or nonsensical, let me explain. When you’re taught that the world was created by an-all powerful, all-loving dude in the sky who gave a beautiful meaning to everything he created — you sort of forget to give things meaning of your own. But when I saw how much infinite meaning three teenagers could give to one song, in one car, on one particular night — that all changed.

I must have read The Perks of Being a Wallflower about five times within the first few months of becoming an atheist, and each time it felt like my world got a little bit bigger, and a little bit more colorful. And I mean that literally: By the end of my fifth re-reading, my college bedroom was covered in multi-colored Post-It notes with inspirational messages. (“This doesn’t mean anything…so it can mean anything,” “It doesn’t have to mean anything to the world to mean the world to you,” and, of course, “And in that moment, I swear we were infinite.”)

Charlie’s infinite moment reminded me that I can connect with this world in a multitude of ways — not just in a church. It might be a song, or a stretch of road; it might be a night sky; it might be a friend laughing into the wind. Charlie needed Patrick and Sam to bring meaning to his life — and I needed Charlie’s story to bring meaning to mine. Now, I could find the meaning of life in an old sandwich, if I looked hard enough.

Case in point: I totally gave my own meaning to Charlie’s quote. I’m pretty sure this line is supposed to be about possibilities, and about participating in life — and instead I turned it into a postmodern approach to spirituality.

Charlie’s infinite moment reminded me that I can connect with this world in a multitude of ways — not just in a church. It might be a song, or a stretch of road; it might be a night sky; it might be a friend laughing into the wind.

But that’s the joy of books, isn’t it? They can mean something a little bit different to everyone; they can tell a slightly different story at whichever stage of your life you read them. If I’d read The Perks of Being a Wallflower in my teens, it probably would have been about friendships and insecurities and romance. When I re-read it a decade from now, it will probably be about nostalgia and journeys and youth. But when I first read it as a 19-year-old trying to come to terms with a new and unfamiliar worldview — it was about God.