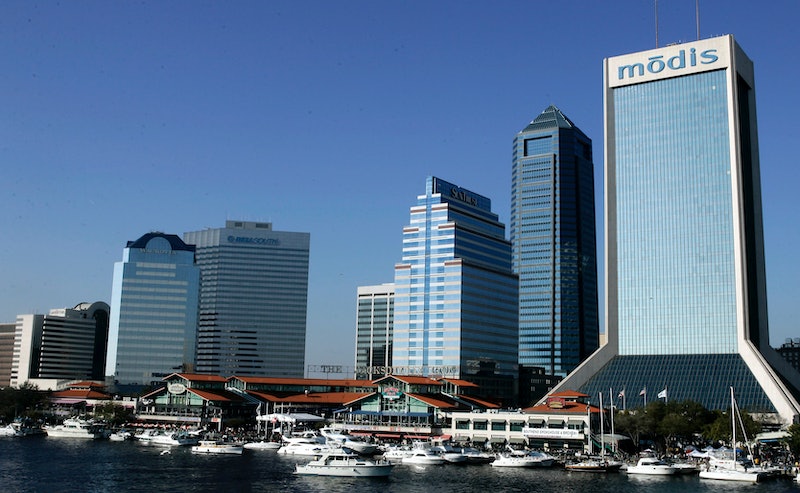 A Florida man who pulled his gun on a car full of teens playing loud music outside a convenience store, killing 17-year-old Jordan Davis, is expected to use the state's controversial "stand your ground" law in court. Michael Dunn, 45, claims he shot at the teens' car in November 2012 because he felt threatened. As Dunn's murder trial begins today, it's drawing sharp comparisons to the trial of George Zimmerman for shooting Trayvon Martin. Both cases involve the "stand your ground" laws and have the same prosecutor, State Attorney Angela Corey.

According to police footage, Michael Dunn and his girlfriend pulled up to a Jacksonville, Fla., convenience store after attending the wedding reception of Dunn's son. While Dunn's girlfriend went inside the store, he says he asked Davis and his friends inside the adjacent car to lower the music blaring out of their opened windows. They complied, but Davis asked that the music be turned up louder a short time later. Dunn says he heard the teens talking about him, alleging that one threatened to kill him. One of the teens then allegedly reached down and according to Dunn, he thought he brought up a gun and was getting out of the car. Dunn reached into his glove compartment, pulling out a pistol, and shot at the car eight times as it sped away.

Davis was the only teen who was shot. Witnesses said the teens never got out of their car or physically threatened Dunn. Authorities found no weapons inside the teens' car.

When asked about comparisons between Trayvon Martin and her son, Jordan Davis' mother, Lucia McBath, she says that Florida laws allow for too much ambiguity. Like Martin's mother, McBath actively advocates against the "stand your ground" law.

"In both cases, the boys were absolutely doing nothing. There was no threat from either one of the boys," McBath told CNN. "... The gun culture, I believe, at this point is really fueling a lot of fear. Citizens are in fear of one another; they're in fear of people that they don't know."

After a five-week trial, an all-female jury found Zimmerman not guilty of Martin's death in July 2013. The Zimmerman case divided the country, sparking racial debates over why the white and Latino man would shoot a black teen walking in his neighborhood. Men and women protested the case by wearing black hoodies and Skittles wrappers over their mouths, which Martin was buying when he was shot.

At the time, President Obama suggested that the controversial Stand Your Ground Law should be reviewed in Florida.

I think it would be useful for us to examine some state and local laws to see if if they are designed in such a way that they may encourage the kinds of altercations and confrontations and tragedies that we saw in the Florida case, rather than diffuse potential altercations. If we’re sending a message as a society in our communities that someone who is armed potentially has the right to use those firearms even if there’s a way for them to exit from a situation, is that really going to be contributing to the kind of peace and security and order that we’d like to see?