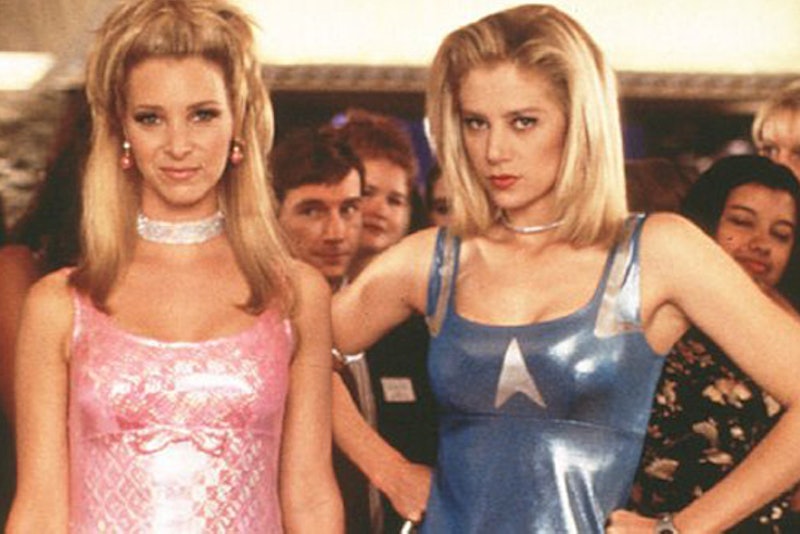 I have a pretty significant high school reunion coming up, and though I’ve missed others in the past, and might not even attend this one, the dread about the entire thing still lingers. What is it about high school reunions that make us so nervous? Is it the desire to impress? The idea of facing old foes? The inherent desire to reinvent oneself and prove we were never the people others thought we were as teens? These worries and themes pop up in one of my favorite movies of all time: Romy and Michele's High School Reunion , a film I'll happily watch over and over again.

Made in 1997, Romy and Michele is one of those painfully '90s comedies that somehow manages to be silly and empowering at the same time. It stars Lisa Kudrow and Mira Sorvino as the titular duo who, after receiving an invitation to their high school reunion, realize they've not really done that much with their lives over the course of the past 10 years. They set out on a hilarious path of betterment that doesn't always work out, but the messages of self-confidence and the importance of female friendships never leave. Here are the things I love best about Romy and Michele, even after all these years:

These two stick together like Thelma and Louise. When times were tough, love lives were in shambles, and the A Group was making their lives miserable, Romy and Michele were there for one another no matter what.

2. It Nails Why High School Was Awful

I think we can all agree that, while high school might not have seemed terrible at the time, we're so much happier now that we're adults and can look back on it. High school is a rough place, full of unfairness, bullies, awkward growth, and personal existential crises. Thank goodness it's over.

3. Romy And Michele Are Kind, Even When Others Are Nasty

Even though they're often treated like crap, Romy and Michele would never be mean to someone just because they could. In fact, more often than not they go out of their way not to hurt anyone's feelings.

4. But That Doesn't Mean They Have No Integrity

When Romy asks to borrow a car from the rental place at which she works, her co-worker Ramon tried to get her into bed in exchange, but she has none of it. That doesn't mean she won't help him out with his ego, but both Romy and Michele know when they're being taken advantage of and how to make it stop.

5. They're Determined To Succeed

Whether it's by working out, being healthy, getting a job, or finding the right path, Romy and Michele are determined as hell to find success. Sure, it might take them a few tries, but they've got drive.

Romy and Michele find their way around their financial destitution and opt to instead make most of their own clothes, which are bright, colorful, and certainly stick out. Way better than those all black business suits they try out.

8. It Has The Most Amazing Dance Sequence In All Of Cinema

9. Romy And Michele Aren't Afraid To Be Themselves

After a lifetime of trying to fit in, dealing with bullies, and suffering through some serious self-esteem issues, Romy and Michele finally say screw it and decide that they're great. It just takes a little push from Michele that deserves to be read in full:

That's all the proof you need that Romy and Michele is, hands down, one of the greatest movies the '90s had to offer.