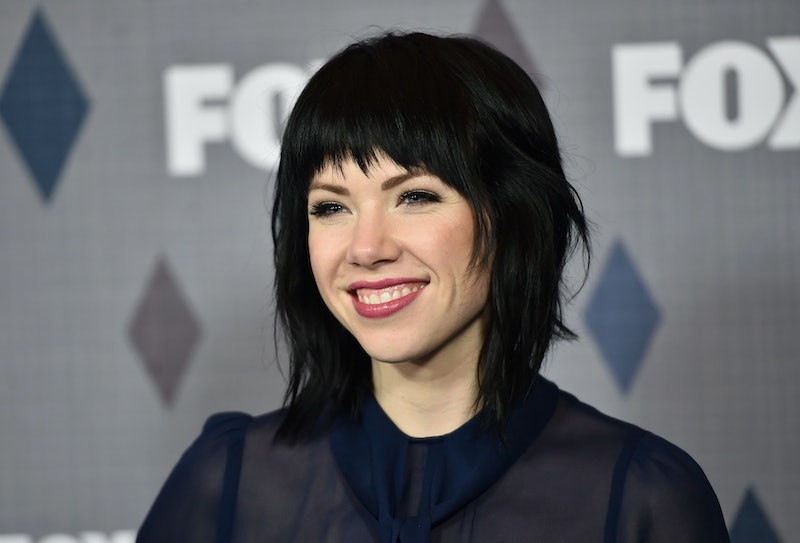 If you're still nostalgic for the '90s sitcoms of yesteryear, then 2016 is bringing you a huge batch of nostalgia — or, rather, Netflix is. The Full House spinoff Fuller House hits Netflix on Feb. 26, which means that eager fans won't have to wait very long to get a heavy dose of Stephanie, D.J., and Kimmy. The three Full House originals may still be the same characters we know and love, but their lives have very much changed. D.J. is now a vet and a widow with three kids, Steph is a single, world-traveling musician, and Kimmy is a divorced mom with a very Gibbler-esque teenage daughter. Another thing that has changed for the former Full House girls? The theme song before all of that gloriously cheesy sitcom action. You can now listen to Carly Rae Jepsen's Fuller House theme song, and it's absolutely everything.

Fuller House didn't stray too far away from the original theme song — in fact, they decided to use the very same song as Full House for the new spinoff, titled "Everywhere You Look." The major difference is who is singing in this time around. While Jepsen has taken the reigns on the new song, the original version was performed by Jesse Frederick. Here's the original tune, as though you could ever forget:

So how can you listen to Jepsen's brand new song? There are a couple of ways. If you want to carry this optimistic little tune with you, you're in luck: Fuller House already has you covered. You can currently download Jepsen's song for $1.29 on iTunes and turn it into your go-to workout song, if '90s sitcom theme songs happen to encourage you to amp up the speed on the treadmill. The song can also be found available for listening on YouTube.

Though the Full House theme song is on Spotify, fans who want to stream the new version may have to wait a little bit for the new song to stream, if the powers that be decide to release it on the service at all. Of course, your favorite place to listen to this song will eventually be in the opening credits of Fuller House — soon, the song really will be everywhere you look.

More like this
Christina Aguilera Had A Mini "Lady Marmalade" Reunion With Mya At LA Pride
By Jake Viswanath
“The Door Is Always Open” For Another 'Breaking Bad' Spin-Off, Says AMC Boss
By El Hunt
Emma Thompson, Lashana Lynch, & Stephen Graham Lead Netflix’s 'Matilda'
By Sophie McEvoy
Why You Loved 'One Tree Hill' So Much — And Still Do
By Sabienna Bowman and Radhika Menon
Get Even More From Bustle — Sign Up For The Newsletter