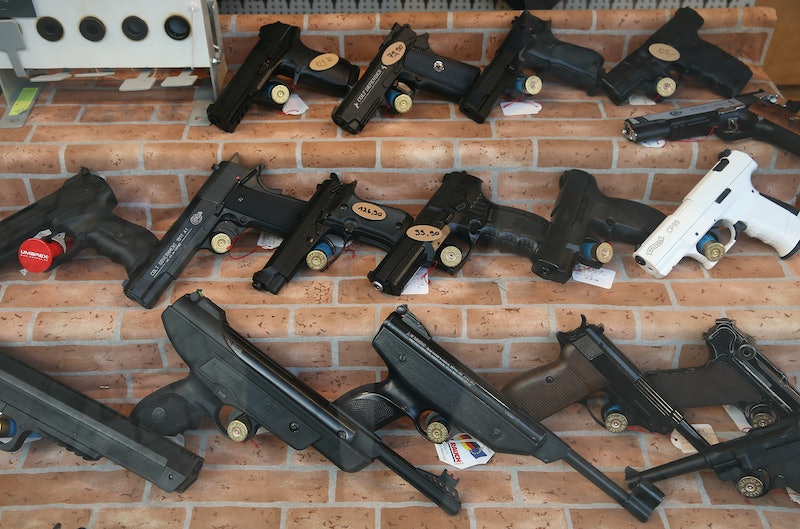 On Thursday, a violent and tragic workplace shooting occurred at Excel Industries in Hesston, Kansas, a small town about 30 miles north of Wichita. The latest in an all-too-regular series of shootings around the country, the incident in Hesston came less than a week after a shooting spree in Kalamazoo, Michigan. As these sorts of shootings continue to occur, so to does the debate over gun laws and how best to keep Americans safe. As it turns out, Kansas's gun laws are very lenient, and they've been made so even during the ongoing gun control debate.

Last April, Kansas's Republican Gov. Sam Brownback signed into law a bill that allowed citizens, age 21 and older, to carry a concealed weapon without first obtaining a permit. At least five other states have similar laws, including Alaska and Vermont. Under the law, which went into effect in July, citizens do not have to obtain a permit in any state to carry a concealed weapon in the state of Kansas. If they take that gun out of Kansas, however, they will have to be sure to have the proper permits required by the state they are in. The law was understandably controversial, with Democratic officials in the state concerned about the law's impact on public safety.

On Thursday, public safety was definitely threatened in Hesston, although it's still too early to tell whether Kansas's new law was abused or not a factor in the small-town shooting. Around 5 p.m. local time, reports surfaced that an active shooter had occupied the manufacturing facility of Excel Industries. Around 6:30 p.m., officials confirmed the shooting, which actually spanned several crime scenes, and announced that the suspect, who was an Excel Industries employee, had been killed by police. At that time, Harvey County Sheriff T. Walton estimated that there were roughly 20 victims, but he only confirmed one death, that of the suspect.

Local news reports emphasized on Thursday evening that Hesston, a town of fewer than 4,000 people, was a peaceful, tight-knit community that was virtually devoid of violence. If the pattern continues as it has in other communities with similar shootings, it's possible that Kansas's lenient gun laws could come under fire for making it too easy to own and carry a gun. Again, it's important to note that it's too early to tell, as of Thursday evening, what kind of gun the shooter used and how it was obtained.

It's also important to note that Kansas's gun laws do place some restrictions on the types of weapon that citizens can purchase and carry. For instance, citizens cannot legally own automatic weapons and certain shotguns. Still, Kansas's gun laws make it one of the most gun-friendly states in the country.

Here's the thing, permits for gun ownership and carry are more than just bureaucratic red tape. They usually coincide with background checks and required gun safety training to create comprehensive gun control laws aimed at keeping people safe. For its lack of all such laws, the Law Center to Prevent Gun Violence has given Kansas a failing grade in its gun law scorecard.

Although many important details have yet to emerge in the Hesston incident, one thing is certain: If residents find they want to enact stricter gun laws following Thursday's shooting, they'll have likely have an uphill battle ahead of them. Currently, cities and counties are not authorized to enact laws that run counter to the state's gun policy. Just a little less than a year after Kansas's gun laws were weakened in a big way, the debate for gun control could soon have renewed support in the state.