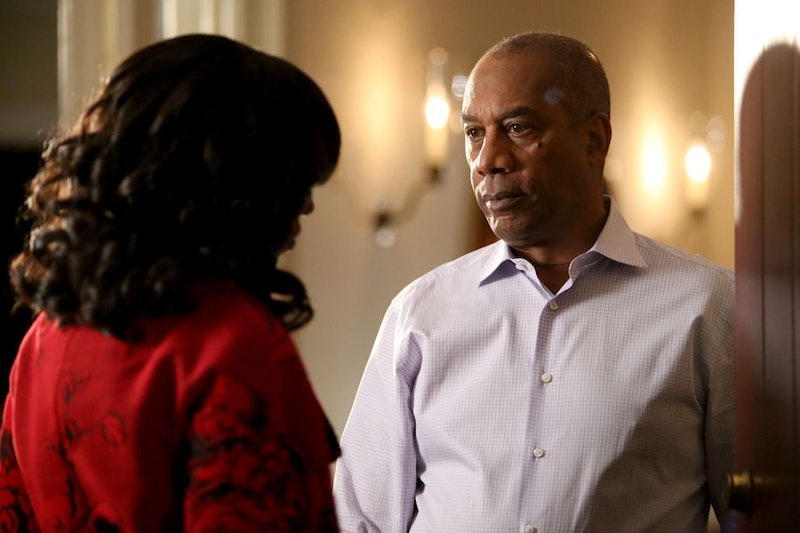 If you ask me, Olivia Pope is one confused individual on Scandal. Hot off the heels of her actual, legitimate relationship with Fitz — and it ending — she's now sleeping with Jake, who currently has a girlfriend, letting her gladiator-ing fall by the wayside... and hanging out with her dad? Yep, on this week's episode of the show, you can catch Olivia chilling on a park bench, sharing Mellie's manuscript with him. But it's a good thing she spent this time with him, because it put together yet another piece of the puzzle that makes up Papa Pope. And Huck pointed out that Olivia is just one of Rowan's pawns in his master plan.

I can't believe I didn't think about this before, because now that Huck says so, it makes perfect sense. OK, so at first it seemed like Olivia was starting to trust Rowan again, and when they'd meet, they'd start talking about Jake. Jake happens to be living with Rowan at the moment — weird, yes — which means Rowan is privy to his personal life. And right now, Jake's in an actual relationship with a woman named Lillian, despite the fact that he still occasionally spends the night at Olivia's place. But this isn't a dad trying to get to know his daughter at all. It's something far more sinister.

Later, Olivia vents to Huck, and that's when he hits her (and the rest of us) with a piece of sheer genius. Just like Rowan created Huck to be who he wanted him to be, Rowan did the same to Olivia, and she didn't even realize it. Part of him making her aware of what Jake is doing is making sure she she keeps doing what he wants her to do. And the scariest part? As Huck said, "when the monster gets hungry he will turn around and eat you."

After this conversation, Olivia decides to do something interesting. She sends everybody at Pope & Associates on a mission to investigate Jake's girlfriend. It's not clear whether this is out of sheer jealousy or curiosity, but I have a feeling Olivia's onto something bigger. A girlfriend is never a girlfriend on Scandal; it's entirely possible that Lillian is one of Rowan's game pieces, too. We'll have to wait until next week to find out exactly what she's doing, but if she was set up by Rowan... it's not going to be good for Jake at all.