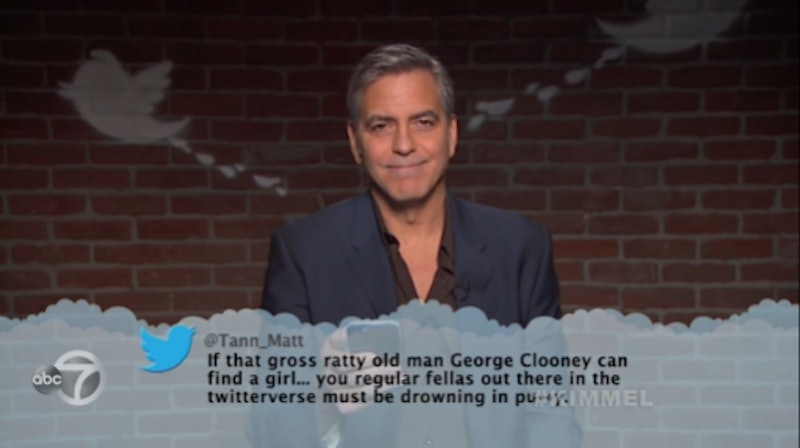 It's always a delight for fans when Jimmy Kimmel rounds up a bunch of the best celebrities in the biz and they learn rather quickly that, while they may be famous and have successful careers in their given field, that there will always be a bunch of haters on Twitter looking to tear them down. Yep, it's the latest edition of Mean Tweets, and this one is a gem: in honor of the upcoming Oscars, a slew of actors appeared on Jimmy Kimmel Live! to hear just exactly what anonymous people out there in the universe think of them. Some of the tweets are hilarious, some are downright cruel... but all are hilarious. Except this time, we've got George Clooney reading the most nonsensical Mean Tweet of all time. No, really. It literally makes no sense.

In this round, the tweets seem particularly underhanded: a charming Twitter user said Oscar Isaac "is a Brooklyn hipster piece of sh*t and I’m gonna fight him," while another called poor Cate Blanchett "f*cking play-doh looking face uggo" (umm, what?) while someone was particularly concerned for Eddie Redmayne's hydration, saying "Eddie Redmayne looks like someone tried to erase his nose, but couldn’t completely. I also think he looks perpetually dehydrated."

But the worst Mean Tweet of all was directed at none other than George Clooney himself.

One anonymous gentleman took to Twitter to relay his feelings about Clooney getting married to Amal Alamuddin, but he was hardly expressing his warm wishes. He said "If that gross ratty old man George Clooney can find a girl…you regular fellas out there in the twitterverse must be drowning in p*ssy."

All I have to say is... are we talking about the same George Clooney? The George Clooney that has quite literally been named "the sexiest man alive" and "the world's most beautiful man" and is as regarded for his acting and directing chops as he is for his good looks? I think I speak on behalf of well, the entire universe, when I say that this poor soul has absolutely no idea what he's talking about, and I'm very, very confused.

I'm certain that Clooney won't be crying into his flawless wife's arms in his mansion over this tweet anytime soon, but hey, you never know.