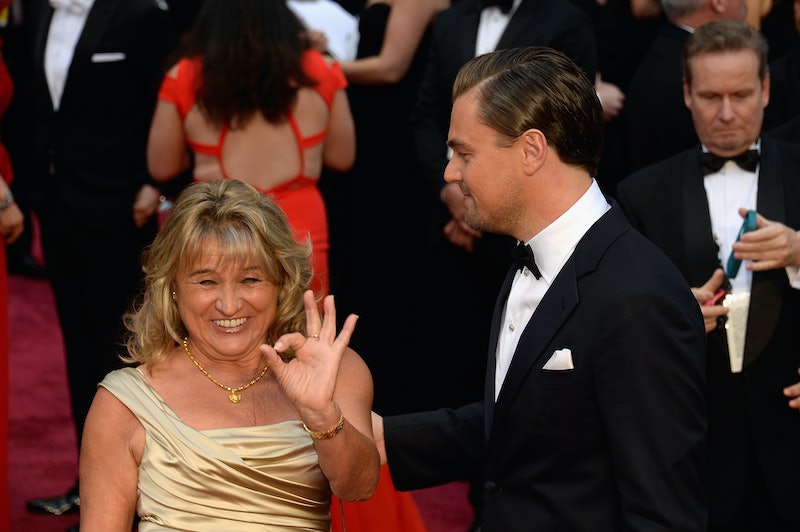 Leonardo DiCaprio has been famous for what feels like forever, from his earliest roles on sitcoms like Growing Pains, Roseanne, and the short-lived Parenthood to the Hollywood heavy-hitter we know today. DiCaprio went from adorable child actor to teen heartthrob to full-blown megastar in his nearly 30 year career (!!) and it seems like he's only getting better with age. People have long been quick to judge DiCaprio for lots of reasons, including who he's dating (or not dating) and his career moves, but one facet of his life that doesn't get nearly enough attention is DiCaprio's sweet bond with his parents, George and Irmelin DiCaprio.

Leo has always tried to keep his private life as private as possible, which is understandable due to the fact that he's one of Hollywood's most sought-after actors. But he frequently gushes about his close relationship with his parents, who divorced when he was a toddler, and it's just about the sweetest thing in the world. He also brings them as dates when he hits the red carpet, making for some seriously cute photo ops and likely plenty of fun for George and Irmelin. So what do we know about the parents of one of Hollywood's hottest actors?

They Gave Him A "Counterculture" Childhood

According to ABC News, Leo grew up in Los Angeles with parents that are "bohemians in every sense of the word." ABC News reports,

His father was a performance artist and comic book distributor. His mother was working at the Uffizi Gallery in Florence when she was pregnant with him. According to family legend, Leonardo got his name because he started kicking like crazy one day when his parents were looking at a portrait of Leonardo da Vinci in the Uffizi. "My dad, being the man that picks up on cosmic messages, said that 'His name must be Leonardo,'" DiCaprio said.

He was clearly made for the arts before he was even born!

His Love Of Movies Came From Dear Old Dad

At the 2015 SAG Foundation Awards, Leo expressed his appreciation for his dad exposing him to great acting talent from a young age:

As a young kid living on the east side of Los Angeles, I grew up very much like Nick Carraway, more so than Jay Gatsby. My childhood was always within and without — living so close to the entertainment industry yet feeling so far from it at the same time. I always saw Hollywood as a place for the elite, the chosen, this Masonic club for which the higher nobles of the acting world might one day reach out and accept me ... I do realize how lucky I’ve been. When I was 14 years old, after doing many television commercials, including Matchbox cars and Bubble Yum, I was watching a Robert De Niro movie with my father, when he pointed to the screen and said to me, "Son, watch closely because this is what great acting looks like." A few years later I found myself on a sound stage playing opposite Robert De Niro [in This Boy’s Life], watching him and learning from him.

Only The Best For His Mom

He may frequently be linked to some of the most gorgeous ladies in Hollywood, but he's all about showering his mom with love. After filming 2006's Blood Diamond, a reporter asked if he felt differently about buying diamonds since starring in the film. He replied "Well, I don't remember the last time I have. My mom is the only person that I would buy something like that for, and for a while now she hasn't wanted one." He's also bought her homes and a Chanel bag worth over $10,000. I'm obsessed.

She's Still Protective Over Her Son

Leo is constantly hounded by paparazzi, and mama DiCaprio once physically shielded her son from photographers in New York. What a trooper!

He Owes Everything To Them

Leo isn't shy about the reason he's pursued his acting career, and it's all thanks to the support of his parents. He told The Telegraph in January 2016, "...I was always wondering how we were going to afford this and that. Acting seemed to be a shortcut out of the mess ... I’m completely indebted to them in every single way." He also told Access Hollywood back in 2014, "I wouldn’t be doing any of this if it weren’t for her, both my parents. She supported this little kid who said, ‘I want to be an actor,’ at 12 years old, which is ridiculous, and she drove me to all these auditions. She’s the only reason I’m able to do what I do."

Leo apparently speaks to his parents daily, and he calls his mom "Mamarazzi" because she's constantly photographing him. Are you melting yet?

According to The Daily Mail , Irmelin had a very rough childhood and was born in a German air raid shelter in 1943 to a German coalminer and a Russian refugee. Leonardo DiCaprio: The Biography says that Leo once said, "When you see a picture of my mother, it’s heartbreaking. It brings tears to my eyes, knowing what she’s been through in her life."

When asked by Parade if he's happy with the way his life has gone, Leo said, "My dad always told me, 'Go out there, son, and whatever you do, I don’t care if you’re successful or not, just have an interesting life. Just be happy to put your pants on in the morning.' I believe I’m doing that." Great advice no matter what your career path may be!

Maybe Leo will be accompanied by his parents on the red carpet of the Oscars come Sunday. It's expected to be a big year for him!