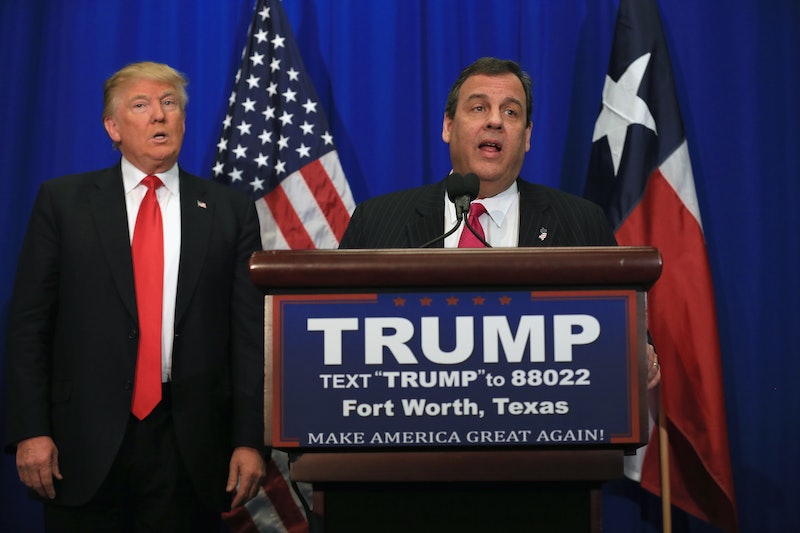 While the establishment Republicans hoping that anyone-but-the-Donald will win the party nomination are likely too busy tearing their hair out to speculate, there's already a joking conspiracy theory behind Chris Christie endorsing Donald Trump. The New Jersey governor made his support for Trump official on Friday at a press conference in Texas — one of the Super Tuesday states where Trump will be up against a local, Sen. Ted Cruz. Christie's endorsement instantly sparked questions: why Trump and why now? But while analysts try to decipher Christie's reasoning, one explanation is making the rounds on Twitter: Christie is gunning to be vice president for Trump and will bide his team until he's impeached.

Christie's announcement took many by surprise. Christie's former presidential campaign finance director, Ray Washburne, simply told Politico, " I am shocked." Taken aback by Christie's support, people are grappling to explain why the New Jersey governor is giving a stamp of approval to Trump as prominent members of his party have stepped up efforts to rally the troops around Sen. Marco Rubio in time for Super Tuesday.

However, Liz Mair, a Republican communications strategist who has advised Wisconsin Gov. Scott Walker and Carly Fiorina (in her 2010 Senate run), offered up a theory to explain Christie's endorsement. After initially tweeting, "What the fuck, Chris Christie?" — a sentiment she probably shared with many others — Mair tweeted her own sardonic hypothesis:

Mair later tweeted that she "wrote 'indicted' when I meant 'impeached.' Read other tweet accordingly." Her prediction (in jest?) that Christie endorsed Trump on the gamble that the latter would eventually be forced from the presidency in disgrace clearly reflects disdain for both men. Her subsequent remarks, though, took special aim at Christie. In another jab, she tweeted that being Trump's vice president is the only way the New Jersey governor could ever make it to the White House.

As Mair herself noted, the concept is "pretty bonkers." Sure, the part about Christie desiring to publicly patch things up with Trump to make an early bid to be Trump's running mate is not out of the realm of possibility, by any means. The rest of that theory, the part about Trump being impeached (let alone making it to the White House) is too uncertain and nutty for any rationale American to believe.

Then again, because the idea is so utterly insane but also carries just the tiniest dash of sense and a heaping amount of cynical ulterior motives, it may just catch on with conspiracy theorists, at least the right-wingers who believe Antonin Scalia was murdered. And if that's the case, Trump, himself, may buy this theory, too.