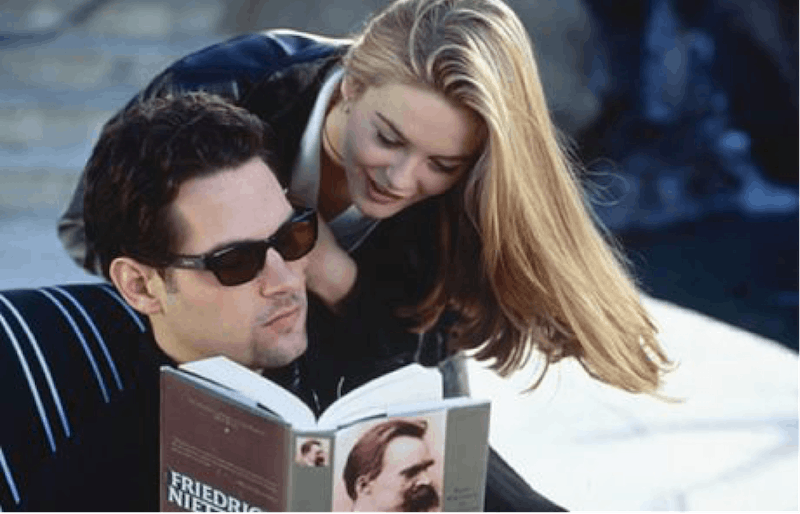 Remember the ‘90s? It was a decade marked with gel pens, black choker necklaces, platform flip-flops and Full House. You could eat some delicious Dunkaroos or Oreo O’s and wash it down with Crystal Pepsi. You could dip your fries in Heinz’s EZ squirt purple or green ketchup (to everyone who thought this was disgusting, purple ketchup was a dream come true to me back then and I miss it every day). You could buy those scrunchy shirts and put a million butterfly clips in your hair and rock out to Britney Spears and the Spice Girls, because those were the days. And then, the decade came to a close, with Mary Kate and Ashley movies gently nudging you into a new millennium.

I was in a small-town bookstore not too long ago and saw a “new books” section. This town must not have accepted that the ‘90s came and went, because a book called “How to Survive Y2K” was sitting front and center of that “new books” section. And honestly, that’s the great thing about the past. You may not be able to buy EZ squirt purple ketchup, or Oreo O’s, or those fantastically uncomfortable yet somehow couture scrunchy shirts, but you can still buy and read some of the best books the '90s had to offer.

Janie Johnson is just trying to eat lunch when she looks down at a milk carton and sees a picture of a missing child. That missing child happens to be Janie. THE TWISTS AND TURNS. This book was a roller coaster of emotion and shock and just the mention of it sends me straight back to the '90s.

Lemony Snicket brought gothic lit to kids when he wrote the first in the Series of Unfortunate Events. I can remember reading this book for the first time and thinking, "wow, I hope these have a happy ending..." I can't say Snicket didn't warn me against that hope, but for some reason we all keep rereading them anyway. How unfortunate.

This Newbery-award-winning historical novel follows the adventures of Catherine, a young teenager in the 1290s (another great year of the '90s, am I right?). If you were a '90s kid, you probably read this one and felt you suddenly knew everything about the middle ages. Such as how glad you were to not be living then, because they didn't have Crystal Pepsi... let alone regular Pepsi.

This book will still make you feel things when you reread it now: Salamanca Tree Hiddle is on a road trip with her grandparents, and tells them a story about her friend Phoebe. Sharon Creech was one of my favorites as a '90s kid, and if you felt the same way, this Newbery winner will remind you why.

The Magic Attic series was my JAM in the '90s. A group of girls plays dress-up, and it turns real — if they're wearing a princess costume and they look in the magic mirror in the attic, they're suddenly in a princess story. Talk about a dream come true. If I put on a plaid skirt and plaid blazer and look in the mirror, will I be transported into Cher Horowitz's life?

7. Sammy Keyes and the Hotel Thief by Wendelin Van Draanen (1998)

Before Flipped, aka one of the best stories ever, came Sammy Keyes, Van Draanen's stellar series about a girl detective with an affinity for high tops. This series was how I learned what high tops were, as well as inspiring me to be just as adventurous as Sammy. Also, I shipped Sammy and Casey before I knew what shipping was... This series is definitely worth a reread.

8. Cleopatra VII: Daughter of the Nile by Kristiana Gregory (1999)

If you were an avid reader growing up in the '90s, chances are you came across the gem of a series that was the Royal Diaries. Told from the perspective of various female leaders from history, this series was both inspirational and (somewhat) educational.

Though the Alice series started pre-'90s (the first in the series was published in 1985), there were so many released in that decade that I think it's safe to call this one quintessentially '90s. Alice navigates friendships, family, and growing up in this coming-of-age series, which is definitely worth a reread. Plus, Naylor released the last book in the series in 2013 (Now I'll Tell You Everything), so you could have a full Alice series marathon and read all the way through.

Scholastic order forms in the '90s weren't complete without an Andrew Clements book on the list, and Frindle was the first and most iconic. Nick Allen creates the word "frindle," much to his English teacher's chagrin, inspiring '90s kids everywhere to make up new words and phrases that probably didn't stick. So fetch.

Was it just me, or was a unicorn obsession a necessary part of growing up in the '90s? If regular horses weren't magical enough for you, this fantastical story about a girl named Cara and her adventures in the world of Luster is definitely worth a reread.

This book is set during the '90s — the 2190s, that is. In futuristic Zimbabwe, three children go on a sci-fi adventure chock full of escapes, kidnaps, and mutants. This book was the one you found in your school's library and became obsessed with in the '90s, so why not check it out once again?

Stanley Yelnats gets sent to Camp Green Lake, a juvenile detention facility in the middle of the desert, and has to dig a bunch of holes. The rest is history. This book is always worth a reread to me.

Queen of '90s fantasy Gail Carson Levine first penned this retelling of Cinderella in '97. Ella has the gift of obedience, but sometimes it feels more like a curse. This one's worth a reread, but you'll realize a few pages in that it's quite different from the movie.

Tristran Thorn says he'll retrieve a fallen star for his sweetheart... and that star turns out to be Yvaine. This old-fashioned fantasy from master of the genre Gaiman is a swashbuckling adventure, and will fill you with nostalgia. Maybe for a time even further back than the '90s.

The book that started it all came out in one of the best decades. This is why our generation is sometimes referred to as the Harry Potter generation... no complaints about that name here.