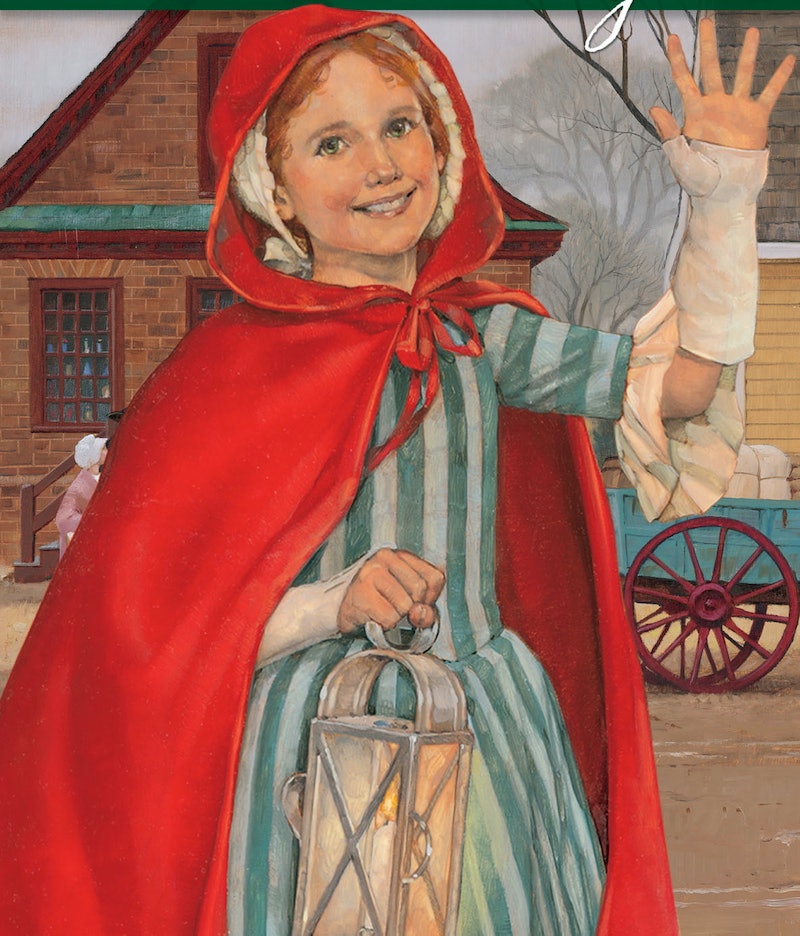 Let's convene for a moment of American Girl nostalgia. From the dolls (albeit pricey, ouch) to the historically themed outfits and matching accessories, we all loved the collection — and probably duked it out with our friends over the best American Girl doll. And even if you didn't own a doll, you likely read the books. The original stories — yes, I'm talking about the old-school ones with the really depressing plot points (forgot about that, eh?) — were fantastic.

Originally released in 1986, the first American Girl dolls were accompanied by a Meet book, which introduced the doll, her friends and family, and the time period that she was from. But these books did more than give a mini-history class — they taught us our first lessons in feminism.

Sure, most of us had never even heard the term "feminism" when we picked up these books for the first time. But as we read, we were being introduced to the concept through these dynamic characters — with which we were appropriately obsessed (it's cool, I was, too). I mean, think about it: the American Girls were strong-headed, spirited, courageous, kind, and fought for a more equal world. Feminism, baby.

Here are some of the lessons we learned that we owe to the badass American Girls:

Don't let gender roles get you down

Perhaps the most strong-headed of the American Girls, Felicity was fighting the patriarchy way back before America was even a country. We loved Felicity for her spunky nature and tomboy personality.

Even at a young age, Felicity picks up on the different expectations for girls and boys in her community. She notices how people seem to focus on her external appearance, valuing her face and body more than anything else (some things never change, sigh). But although neighbors tell her to be more like a girl, she'd much rather partake in less "feminine" activities. She's not interested in helping her mother bake a cake, or stitching a sampler, or perfecting her handwriting. Instead, she'd rather ditch the gowns for a pair of britches and help her father in the store, or even go out riding on her horse, aptly named Independence. In fact, she gains the trust of the horse when no one else can, and rescues if from an abusive owner. In her most feminist act, she sets Independence free. Felicity sees oppression and injustice, and actually goes and does something about it. Does it even get more badass than that?

Felicity didn't let anyone stop her from following her heart. If she were around today, she'd probably appreciate the many rights that women have gained since her time. But even though our society is more equal now than in her time, Felicity's story still applies to modern women. Felicity taught us that nothing — not even the most established gender stereotypes — can hold down a determined girl with a free spirit.

Be courageous enough to try new things, even if they scare the hell out of you

One of the first three American Girl dolls to be released in 1986, Kirsten's story is an embodiment of the immigrant experience. Originally from Sweden, Kirsten's family comes to America in the pursuit of a better life. But getting to this new life is a tough road, and Kirsten faces some huge challenges along the way.

Kirsten travels across the Atlantic in a ship cramped with hundreds of other immigrants. After the boat finally docks in New York City, she ends up getting lost on the city's streets. She's scared and overwhelmed, where she is surrounded by strangers and can't speak the language. Kirsten deals with new experiences — including riding a train for the first time, which is pretty terrifying having never even seen one before — and has to face some painful facts in the process. She watches her best friend Marta die of Cholera, and sees her family struggle to make ends meet. It's rough.

It takes a while before Kirsten accepts America as her new home. But despite being unsure of life in a new country, Kirsten keeps an open mind. Even though she's terrified, her optimism gets her through the worst of times. Kirsten's story showed us that a little bit of positivity and a lot of courage can be just enough for any girl to take on the world.

Don't let anyone stop you from getting at your dreams, girl

Of all the American Girls, Addy has arguably the heaviest burden to bear. Born into slavery, Addy lives and works on a plantation with her parents and siblings. Although she spends her days working in the cotton fields, she dreams of learning to read, having a home of her own, and being free.

Addy witnesses more than her fair share of atrocities. She watches her older brother, Sam, being whipped and sold. She watches her father being chained up and sold to another plantation owner. She survives a brutal assault from the plantation's overseer, who forces her to eat a handful of live tobacco worms — yes, tobacco worms — to teach her a lesson. She has to leave behind her baby sister, Esther, when she and her mother make their escape. And when she does run away, she almost gets caught by a group of Confederate soldiers. (I bet you didn't remember all of this from the books — they were pretty intense, right?)

Despite all this, Addy's dream of freedom comes true. In later books, she even enrolls in school and learns to read and write. Addy's resilience drives her to pursue everything she wants, no matter how many things (or people) try to get in her way. Reading her books is not only humbling — but holy hell is it inspiring. Addy taught us to hold on to our dreams and to never stop fighting to keep them alive. 'Cause if she can do it, we can, too.

Stand up for what you believe in

Sure, Samantha sometimes gets a bad rap for being more privileged than some of her American Girl counterparts — and there's a little truth to that. But she's more than just a pretty little rich girl.

Despite being born into an era that pushes girls to be prim and proper, Samantha is not afraid to have an opinion. Yes, she wants to please her grandmother Grandmary, but she's also not afraid to have an opinion. Although she is partly influenced by her aunt Cornelia, a women's suffragette, Samantha often holds her own. When the family's seamstress Jessie has to quit her job to take care of her baby, she argues with Grandmary firmly (but politely!) that Jessie should be allowed to come back to work. When she wants a new doll from her grandmother, she is ready to get a job to earn it, because she believes that women shouldn't have to depend on men. And when Samantha's friend Nellie is in financial trouble, she insists that she must do something to help Nellie's family.

Samantha challenges her era's stereotype that girls don't have or need a voice. In her time, women didn't even have the right to vote, much less voice their opinions. And yet, Samantha stands up for what she believes in, even when the people around her tell her otherwise. Samantha taught us not only the importance of thinking for ourselves, but also the value of advocating for others. Preach it, girl.

Dig deep, and have grit

Compared to the rest of the original American Girl dolls, Molly's seems to have it easy. She goes to school, lives with her family, and basically lives the life of a normal preteen. Oh, except for one thing: she grows up during World War II.

Molly's greatest hardship is how much she has to sacrifice. She has to sacrifice her family dynamic when her dad goes overseas to work as a doctor in the war. She gives up time with her mother, who has to work long hours at the Red Cross. She even sacrifices simple pleasures, like sugar, candy, and butter, due to war rations. Of course, Molly is still a typical tween who struggles with self-confidence and dissects her looks in front of the mirror. But living through World War II and experiencing loss and sacrifice make her tougher than most 9-year-olds.

Even though Molly's story isn't the most gut-wrenching, she shows us that we are much tougher than we'd like to think. Molly taught us a lesson that still holds value even today: dig deep during tough times, and keep on survivin'.