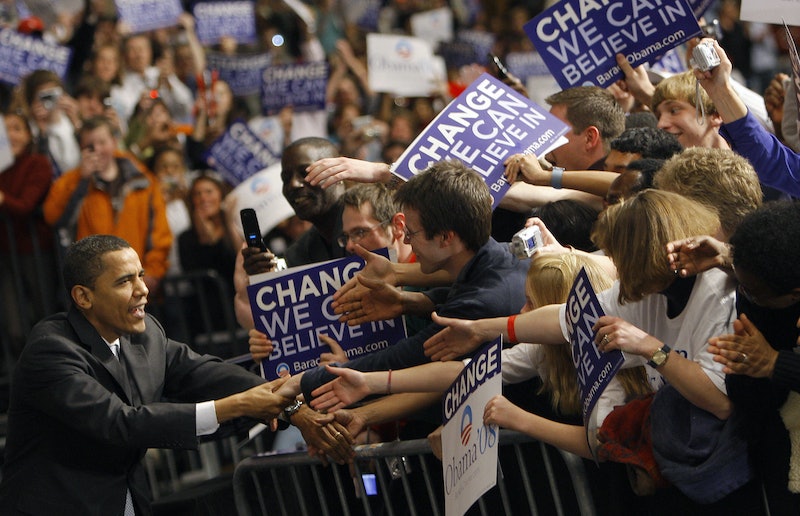 Super Tuesday is a big deal for presidential hopefuls as they continue to campaign and vie for the highest office in the land. The massive series of caucuses and primaries that occur in one day affect both the Democratic and Republican parties. Candidates have been avidly campaigning around the country. The big event affects far more than the contiguous United States as well. Both America Samoa and Democrats abroad will have the opportunity for their voices to be heard as they seek to narrow the field and help their respective parties find a presidential nominee. To better accurately predict what the results of Super Tuesday means for both the left and the right, it's pretty helpful to take a look back. Past Super Tuesday winners who won the nomination include quite a few presidents as well as political heavy-hitters who've gone on to do great things.

The first formal Super Tuesday to take place occurred in 1984. Within the next election cycle, clamor for the event had continued to mount, most notably in the South. After so many election seasons with what they felt like was little care from candidates, southern Democrats hatched a plan to force politicians to take notice of them. They looked to Super Tuesday as their big moment. The 1988 Super Tuesday saw 21 states hold primaries and caucuses. Considering that the inaugural event had just nine events, 1988 Super Tuesday was expected to be a major win. The path of the Democratic victor that year tells a markedly different story, however.

Here's a look at the presidential candidates who won Super Tuesday and then took their party's nomination as well — but not necessarily the presidency.

Former Massachusetts Gov. Michael Dukakis managed to win the two largest states during the 1988 Super Tuesday. His victory only further divided the Democratic party at the time, however. Dukakis' nabbing of 372 delegates was just 22 more than the second place candidate, Rev. Jesse Jackson. It would not be until the Democratic National Convention that Dukakis would firmly and formally be nominated for president, however. Jackson and many other candidates refused to concede up until that point. Dukakis would go on to lose to George H.W. Bush.

Nearly two and a half decades ago, former Arkansas Gov. Bill Clinton was considered a relative unknown to the Democratic party when he announced his intent to run for president. Come the 1992 Super Tuesday, the candidate firmly established himself as the come from behind frontrunner. Clinton won every southern state to hold a caucus or primary on Super Tuesday. Such a decisive victory is what ultimately flipped the script of the 1992 election. Clinton would not only go on to receive the Democratic nomination but be elected as president.

Third time was the charm for former Kansas Sen. Bob Dole, who had previously failed to nab the Republican presidential nomination when campaigning in 1980 and 1988. Dole's total sweep during the 1996 Super Tuesday series of caucuses and primaries effectively cemented him as the GOP nominee. His victory decided the Republican field so convincingly that fellow candidate Steve Forbes ended his campaign the day after Super Tuesday took place. "I think it is pretty clear now that Bob Dole will be the nominee," Dole said, speaking in the third person following his big win.

What do GOP frontrunner Donald Trump and former Vice President Al Gore have in common? Both are the only politicians in their respective parties to win every delegate in the South Carolina primary. If Trump's pattern of sweeping victories continues, history may repeat itself yet again for the real estate mogul, giving him yet another thing in common with Gore. Following his big win in the Palmetto State, the former veep-turned-climate change activist had a seriously remarkable 2000 Super Tuesday in which he won all 11 states that held primaries and caucuses.

John Kerry's 2004 Super Tuesday was an incredibly dominating one. The current secretary of state won nine out of 10 states that held caucuses and primaries. Democrats were the party to watch in 2004 due to President George W. Bush seeking re-election. Many considered Kerry to be a solid candidate to defeat Bush and he came quite close during the general election, falling to the 43rd president by a mere 118,000 votes cast in the key swing state of Ohio.

Results from Super Tuesday 2008 all but cemented Arizona Sen. John McCain's GOP presidential nomination. Though the senator lost to current President Barack Obama, he nonetheless ran a competitive campaign that changed drastically following the series of caucuses and primaries. McCain emerged on top in nine states, managing to claim victories in states rich with delegates, including California and Missouri. Super Tuesday 2008 also saw a shift in attitude for McCain, who appeared to sense his impending nomination prior to the Republican National Convention that year. Speaking at a rally in his home state the night of Super Tuesday, McCain had this to say about his truly Super Tuesday:

Tonight, I think we must get used to the idea that we are the Republican Party front-runner for the nomination of president of the United States. And I don't really mind it one bit.

It took a lot for the man who would ultimately face Obama in the 2012 election to nab the Republican nomination. During Super Tuesday 2012, Mitt Romney won six out of 10 states. The victory wasn't a major coup but it did signify an important moment in the Romney campaign. Following the mixture of primaries and caucuses, Romney earned enough delegates to put him well over his rival candidates. With 404 total delegates following Super Tuesday, the former Massachusetts governor had more delegates than the other three Republican candidates combined. Such a lead was what ultimately led to Romney's presidential nomination.

More like this
Jennifer Garner's "Lovely Date" To A White House Dinner Was Her Daughter Violet
By Brad Witter
Here’s Your Daily Horoscope For December 6, 2022
By Mecca Woods
10 Low-Impact Leg Exercises That Bring The Burn
By Carolyn Steber
Everything To Know About 'Monarch' Season 2
By Gretchen Smail
Get Even More From Bustle — Sign Up For The Newsletter