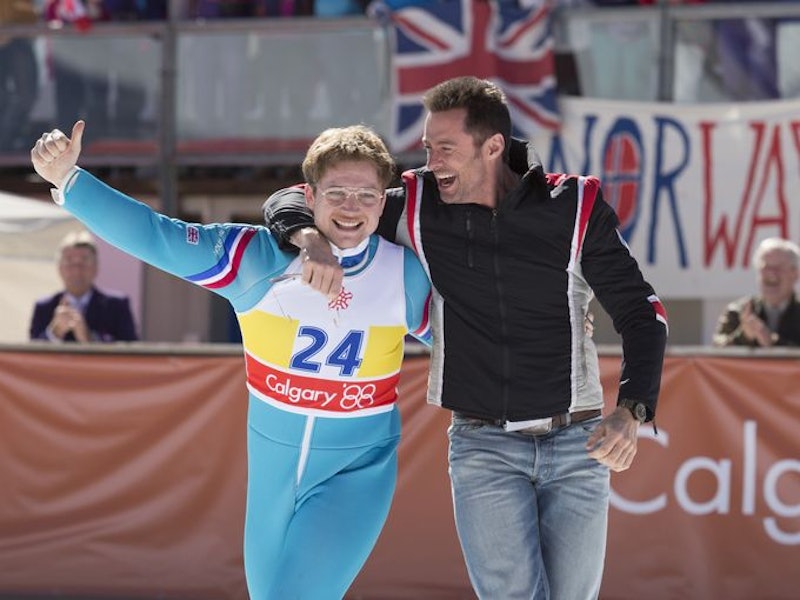 Eddie the Eagle tells the story of Michael "Eddie" Edwards who, after getting cut from the British speed skating team right before the 1984 Olympics, learned the sport of ski jumping and then sorta triumphed/became one of the most "heroic failures" of the 1988 Winter Olympics. And while the all-star cast (hello, Hugh Jackman) and fabulous teal onesies of the film are well known, there is one moment you may have missed in Eddie the Eagle and it is full of 90's Disney nostalgia.

In addition to featuring Eddie Edward's not-so-successful attempt at ski jumping, the 1988 Winter Olympic Games in Calgary also hosted a little-known Jamaican bobsled team competing in their first Olympics. That's right, Eddie the Eagle and Cool Running exist in the same universe. And yes, I'm talking about that Cool Runnings, the 1993 Disney film starring John Candy, Doug E. Doug, and the "feel the rhythm, feel the rhyme, it's bobsled time" magic of your childhood.

Cool Runnings, aka the greatest film about Jamaican bobsledding, is a personal favorite of mine. Knowing that two spectacular sports films came out of one Winter Olympics, really makes me wish I was alive and in Canada during 1988, but, alas, time is a cruel mistress, so I'll just have to settle for watching these movies — and by settling, I mean I'm living the absolute dream.

An early version of the script even had everyone's favorite Jamaican bobsled team appearing in the film. Star Taron Egerton explained to Yahoo Movies, “There was originally going to be a bit where I went up for my jump, and walked past the Jamaican bobsled team and they had some line like, 'He doesn’t belong here.’ But I think it felt just a bit overdone or too convenient.” I would just like the world to know that scene would not be overdone; it would have been the perfect amount of done.

While the team doesn't physically appear in the film, they are given a shoutout. During the film, Edie's trainer (played by Hugh Jackman) cuts off the radio right as a newscaster begins to announce one of Jamaican bobsled runs. So, while I wish there had been a cameo from Doug E. Doug (I love me some Doug E. Doug), it's nice that the creators of Eddie the Eagle gave proper due to 1988 Olympic films that came before it.

As if I didn't already have enough reasons to see Eddie the Eagle this Cool Runnings easter egg has me extra motivated. Some would even say an Olympic athletic level of motivation.