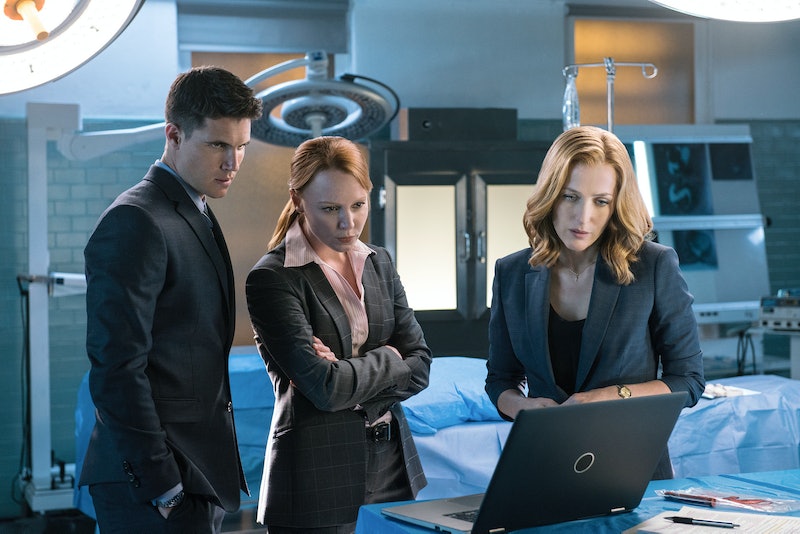 Now that the revival has completed its short, six-episode season, everyone is wondering what's next for Mulder and Scully. Will The X-Files return with more of our favorite FBI agents, or will David Duchovny and Gillian Anderson's other filming schedules get in the way? Even if they're available, do we even want more of them, or has their story come to an end? If so, is there anything we can do to keep the X-Files universe afloat without Mulder and Scully? Some fans have looked to another open-minded agent and his more skeptical, red-haired doctor partner: Agents Miller (Robbie Amell) and Einstein (Lauren Ambrose). Some have even gone so far as to suggest that this run of episodes was partially setting up a new series. So, now that this season is complete, what are the chances of a Miller and Einstein X-Files spinoff?

There's been a lot of whispering about these two characters, and whether or not they could make it as their own series. Then again, there's also been a lot of rumbling about whether or not The X-Files will return for another season, or maybe a third movie. The future of show and its characters, as always, is murky. But there are clues. Using a bit of Scully's scientific mind and some of Mulder's strong power of belief, let's weigh the evidence for or against a spinoff.

In Favor: The X-Files Did Very Well

Ratings for the return of The X-Files were huge — almost shockingly so. In fact, the Season 10 premiere episode had higher ratings than the average of the most-watched season of the show, Entertainment Weekly reported, and the numbers after that remained strong. FOX should be willing to do anything to keep the X-Files universe alive, including a Miller/Einstein spinoff.

Against: The Ratings Are So Good, They Might Just Want More X-Files

The most obvious way to keep the X-Files ratings juggernaut going, obviously, is to just do a Season 11 of The X-Files. And it seems Chris Carter and FOX are both interested. "I can’t imagine, with the ratings that we’ve got and the way we ended this season, that there won’t be more X-Files," creator Chris Carter told TV Line. "They will find a way to get that done. Because I spoke about it briefly with [Fox CEO] Dana Walden today, so there’s an appetite there." If they have more Mulder and Scully, they don't really need more Miller and Einstein — at least not in their own separate show.

Carter and FOX may want more X-Files episodes, but they can't do them without Duchovny and Anderson. And they've got other things in the works. Scheduling around those two stars is primarily why The X-Files Season 10 was only six episodes. Anderson is still on another television series, The Fall, and doesn't seem all that interested in returning for the long-term. "I’ve got three kids and I live in London," Cinema Blend reported her as saying, "and if they want to shoot in Vancouver, British Columbia, or Los Angeles, I’m not really interested in moving. It all depends on what they’re talking about, how many they’re talking about and what they’re offering." If Anderson and Duchovny's schedules are really busy, a Miller and Einstein's series might be an easier venture, or even a way to hold fans over until a full X-Files Season 11 can be filmed.

In Favor: Miller & Einstein Are Down

One person involved is hoping for a spinoff as much as fans are. Ambrose said she'd certainly welcome the chance to film additional episodes. "All I know is it was a great place to work, and I would love to do more," she told TV Line. "I love working with Chris and David and Gillian [Anderson]. They’re all amazing, talented people … and I would like nothing more than to do more." And Amell isn't doing The Flash anymore, so he should be available. Everyone might want Mulder and Scully, but they might get Miller and Einstein.

Against: They Have No Contracts In The Works

No matter who might want what, nothing's been settled either way. The last time Carter addressed the subject of a Miller/Einstein spinoff was at New York Comic-Con, where he didn't confirm a spinoff, but didn't deny the possibility of one, either. He only mentioned that Ambrose and Amell's contracts didn't go beyond the six epsidoes of Season 10. "People can speculate," he said, "but [their pacts] weren’t negotiated that way.”

Against: No One Loves Miller & Einstein The Way They Love Mulder & Scully

This one is harder to quantify, but it seems that, though fans are excited about the return of The X-Files, episode-to-episode reactions were mixed — and Miller and Einstein's episodes, "Babylon" and "My Struggle II," were the least well received. There aren't hard-and-fast numbers for that, but it's the sense I get from reading fan reactions on the internet. Is anyone really clamoring for a Miller and Einstein spinoff? In my opinion, they work best when used in tandem with Mulder and Scully to serve as a contrast, as they did in "Babylon." When they tried to incorporate them naturally into a regular episode, like they did in "My Struggle II," it seemed less possible that they'd be two characters you could hang a whole series on and not compare them unfavorably to Mulder and Scully.

I guess it all boils down to whether or not they can make another season of The X-Files work with Duchovny and Anderson. If that's the case, maybe Miller and Einstein would return to that series, but it seems doubtful that they'd get their own. If things don't work out for an X-Files Season 11, though, a Miller and Einstein spinoff can be a not-as-great replacement.