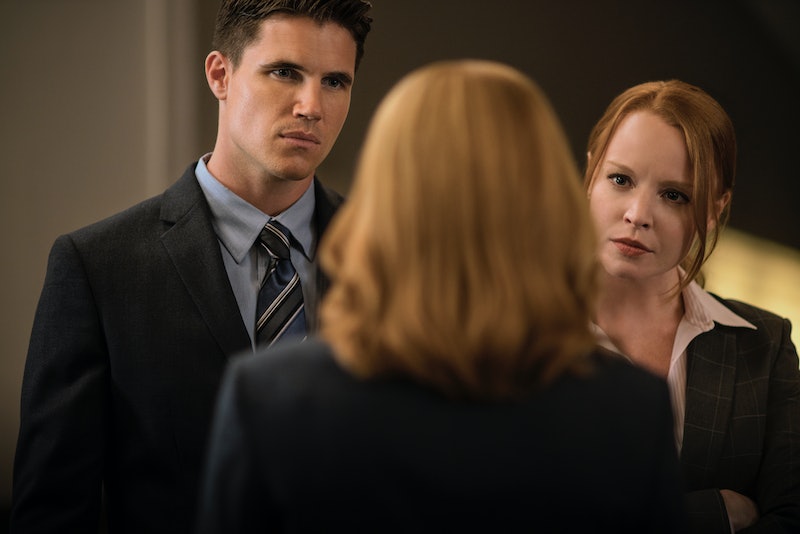 Do you want to believe that there will be more of The X-Files after this Monday's finale? FOX's six-episode revival of the beloved sci-fi series comes to an end this week, but if fans hope to see more of the F.B.I.'s most unwanted, they may have to look beyond… Beyond Agents Fox Mulder and Dana Scully, that is. Last week's trippy episode, "Babylon," introduced Agents Miller and Einstein, played by franchise newcomers Robbie Amell (The Flash) and Lauren Ambrose (Six Feet Under). Like Mulder and Scully, Miller is a handsome dark-haired believer while Einstein is a pretty red-haired skeptic. Is it possible that these doppelgängers will get their own series? Is FOX planning a Miller & Einstein X-Files spinoff?

It's no secret that the network would love to have The X-Files back for more episodes. The revival has been doing very well in the ratings, FOX has been promoting Monday's episode as a "season finale" and not a "series finale", and Fox Entertainment president David Madden recently told Variety in no uncertain terms that, "We would love to do more." The biggest stumbling block to a second reboot season would likely be the same as the first: the busy schedules of its stars, David Duchovny and Gillian Anderson. But FOX would be able to sidestep this not-insignificant issue if they simply greenlit a new season that focused squarely on Miller/Einstein rather than Mulder/Scully.

Rumors of "Babylon," the episode in which Miller and Einstein are introduced, serving as a "backdoor pilot" for a spinoff series first surfaced in November, as soon as news of Amell's and Ambrose's casting broke. Back then, TVLine's Michael Ausiello spoke with X-Files creator Chris Carter at the New York Comic Con, and reported the man as neither confirming nor denying the existence of a spinoff; rather, Carter merely noted that Amell's and Ambrose's contract "do not contain a series deal beyond the six-episode revival" and that "people can speculate, but [their pacts] weren’t negotiated that way."

However, The Wrap notes that, should FOX decide they are interested in a spinoff, both Amell and Ambrose are currently available to commit full-time to a new project. Amell recently kicked the bucket on The CW's The Flash, freeing up his schedule, and the site quotes the actor's reps as saying he is now "generally available." They added that, "Ambrose seems fairly open, at least per her IMDb page, but her reps didn’t immediately get back to us."

The Wrap also points out that a hypothetical X-Files spinoff would perfectly follow the pattern that FOX has is currently using on one of its other most beloved properties: 24. Like The X-Files, 24 was a hit show for the network that ran for a comparable number of seasons (eight versus X-Files' nine); it then aired a miniature revival season (24: Live Another Day) that simultaneously provoked nostalgia in old viewers and picked up new ones along the way before announcing the development of a full-fledged spinoff (24: Legacy) without the involvement of the series' former stars. (Instead of Kiefer Sutherland and Mary Lynn Rajskub, Legacy will star Straight Outta Compton 's Corey Hawkins and Homeland's Miranda Otto).

Could FOX be trying the same tactic with two of its long-running hit series? It certainly seems conceivable. And rather than risk trying both at once, it also makes sense that they might wait to see how critically and commercially successful 24: Legacy is before officially greenlighting that X-Files spinoff. So if the former is a huge hit for the network, then you can fully expect news on the latter to follow quickly. For her part, Ambrose seems totally keen on the idea. The actress told TVLine earlier this month that, while there had been no update from her agents on the spinoff front, she "would love to do more. I love working with Chris and David and Gillian. They’re all amazing, talented people… and I would like nothing more than to do more."

While we eagerly await news about the future of The X-Files, you can see Miller and Einstein pop up again in this Monday's season finale, "My Struggle II."