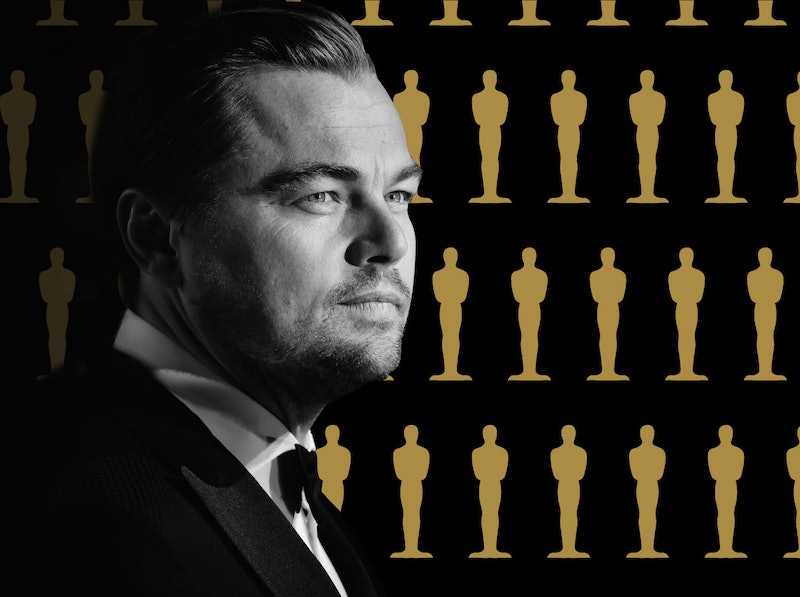 From the moment the 2016 Oscars nominations for Best Actor were announced, it was clear that this year's awards show would be historic. This was, of course, based off of those who received nominations: Eddie Redmayne for The Danish Girl, Michael Fassbender in Steve Jobs, Matt Damon for The Martian, and Bryan Cranston for Trumbo, and Leonardo DiCaprio for The Revenant. Of those names — all of whom deserve to win the Academy Award for Best Actor due to their spectacular performances in this year's greatest films — one stood out the most: DiCaprio's. It was clear that once the winner was announced during the show on Feb. 28, we'd either have another Academy Awards show to add to the list of ones that did not award DiCaprio the Oscar despite his talent and status in Hollywood, or, we'd have the first Academy Awards show to name as the one that finally gave DiCaprio his Oscar. Both outcomes would be historic in their own way. And, now that the winner has been announced, we finally have our answer. Turns out, it was the latter option that ended up being the outcome: Leonardo DiCaprio won the award for Best Actor at the 2016 Oscars for his role in The Revenant, and it's about damn time.

When heading on stage to accept his much-deserved award, DiCaprio looked appreciative and emotional (though, really, it was Kate Winslet's reaction to DiCaprio winning that really stole the spotlight). He took the time to thank all those who worked with him on The Revenant, before segueing into an important conversation about climate change. "Climate change is real," DiCaprio said. "It is happening now."

Climate change is an important issue to shine the spotlight on, so it was great to see that DiCaprio used his platform to do exactly that — even with the platform being his first Oscar acceptance speech after he was nominated six times before.

Sunday's Oscars were truly historic. Congrats, Leo! This is literally me right now, for the record:

Update: Shortly after his win, DiCaprio shared a statement to his Facebook page once again thanking the Academy for the honor, and stressing the importance of fighting climate change:

And here's video of his acceptance speech: