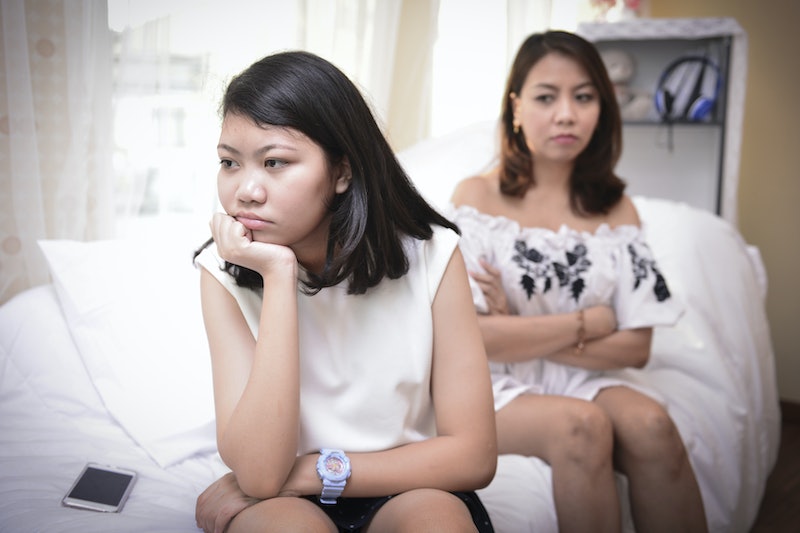 Parents have it really tough a lot of the time. I'm not a parent, and neither are the majority of my friends, but I am still floored on a regular basis at just the thought of having kids and telling them what to do and having them resent me for it and oh god, I'm anxiety spiraling. But you know those "We support you, but" conversations with your parents that always seem to end with the feeling that you're not actually being supported much at all? They may be a sign that your parents are concern trolling you.

According to Geek Feminism, a concern troll is "a person who participates in a debate posing as an actual or potential ally who simply has some concerns they need answered before they will ally themselves with a cause," when in reality they're a critic — and usually a judgmental one, at that. A great and infuriating example are the, "Oh, sweetie, I'm just worried about your health" comments that swarm body positive women whenever they post a photo online. You know the comments I'm talking about. They're terrible.

The concern troll trend arose online, as so many bad things seem to do, but it translates particularly well into face-to-face interactions, and even better into face-to-face interactions with your parents. Your mom may not even know what a "troll" is, but she can concern troll you right into a cardigan and slacks. And that's not to say that she doesn't really, deeply, sincerely care about you; of course she does. But that doesn't mean that she can't also be condescending and a little manipulative, even if she's not doing it consciously.

These five signs might be an indication that you're being concern trolled by your folks. If they do it, you might try calling them out on it gently, but firmly. Just because they're your parents doesn't excuse their bad behavior.

1. They're Concerned About What Other People Will Think About Your Physical Appearance

Because not everybody is as open-minded as they are about, well... the tattoos, the piercings, the dyed hair, the short-shorts, the low-cut tops, the visible bra straps, the lack of a bra, the ripped tights, the ripped jeans, the casual look, the masculine look, the feminine look. Your look. They're worried what other people will think, but they're totally fine with... all that. (Except that we're kind of not.)

2. They Worry That You're Not Actually Happy Being Single

Aren't you lonely? Don't you want to be in a relationship, even just a little? Don't you want kids? Being single is difficult, they can't even imagine being single in this day and age. Don't waste your youth! Don't waste your good looks! Time is a cruel master and one day you'll wake up and it will be too late! Aren't you tired of seeing your friends getting married?

3. "Are You Sure You Want That Second Serving?"

It's nice that you are OK with your weight and all, but they just want to make sure you're being healthy. Also, your metabolism slows down with age. You're not 15 any more. Just saying. For health purposes. (Translation: "We're totally judging you in ways that are not ours to judge.")

4. They Just Think Maybe You Should Tone Down Your Opinions A Bit

Yes, they also think feminism is important, but honey, not everything is sexist. You might offend someone with all that yelling!

5. They Are Concerned What Other People Will Think Of Your Social Media Presence

Not them, they're fine with it, but you know. Friends. Relatives. Bosses. Strangers. Is that a red cup in your hand? Did you just imply that you have pre-marital sex in that tweet? Your Facebook status had a swear word in it! What will people think? All those other people!?