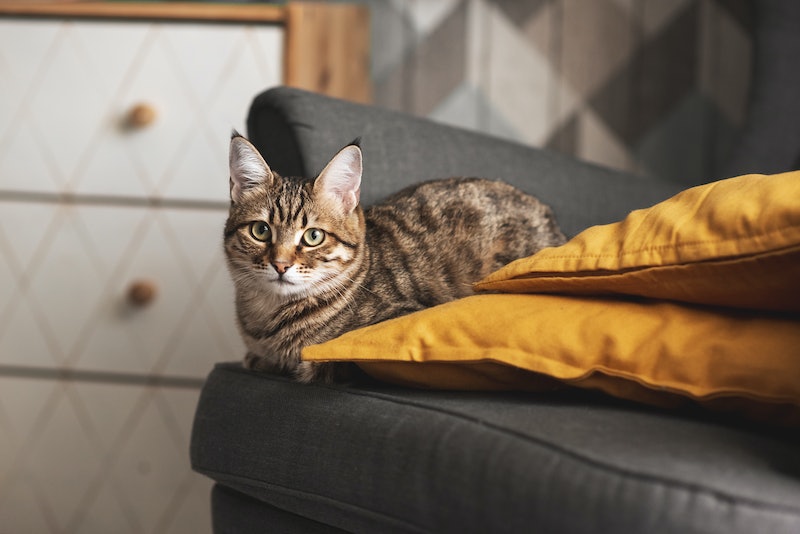 If you caught the Puppy Bowl during Super Bowl weekend, you may have noticed something seemingly cute but kind of troubling when you think about it: The football players are dogs, while the cheerleaders are cats. This is one of several manifestations of the assumption that women are like cats while men are like dogs. This stereotype is equally evident in expressions like "men are such dogs." The Google search bar has even picked up on this widespread cultural notion: When you type in "women are like," the first suggestion you get based on previous searches is "cats." Where does this bizarre association between genders and house pets come from, and is there any truth behind it?

If you take a look at online relationship self-help forums, you can see the reasons we tend to associate dogs with men and cats with women spelled out. Like dogs, relationship coach Corey Wayne writes on the site Understanding Relationships, "men are very logic and reason oriented. If you want them to do something you must give them step-by-step instructions. They usually are not good at reading between the lines to figure out what a woman is really trying to say to them." Or, take it from the MRA group Return of Kings: "Cats are manipulative, prodigal creatures. ... Cats know how to insinuate themselves into your affection, even if they are useless creatures."

Aside from being disturbingly misogynistic, these comparisons are also based on outdated, offensive stereotypes. Here are just a few reasons that women are not, in fact, just like cats.

One of the reasons women are often associated with cats is that women are supposedly impossible to please romantically and sexually, the same way cats supposedly are never satisfied with the way humans pet them or what food or toys they give them. Women demand all this fancy stuff, and even then, they won't sleep with you, the story goes. And then, if they do, it takes so much work to please them, right? Except... not really.

The perception that it's harder to get women to sleep with you comes more from slut shaming than anything else. One study published in Current Directions in Psychological Science found that women were as likely as men to be interested in casual sex if they wouldn't be judged for it. And according to a study in The Journal of Sex Research, the majority of women — 55 percent, compared to 43 percent of men — are satisfied with their sex lives. So, no, women are not impossible to please. And neither are cats, really — they purr pretty easily. All these stereotypes, in fact, are more about perceptions of cats (which in turn are influenced by notions of femininity) than about cats themselves.

2. Women Don't Need To Be Taken Care Of

Women are not house cats because women do not need men to feed them or give them a home. A relationship with a woman is not something you get in exchange for financial support but something she freely gives. Though women may have historically depended on men financially, a survey from market intelligence firm Synovate shows that six in 10 women worldwide are financially independent, and that number will continue to rise as their wages do. Unlike popular notions about cats, women are not "gold diggers" who form relationships with humans in exchange for the resources they can provide.

Another result of the "gold digger" stereotype is the joke that women chase after shiny objects like jewelry the way cats go after toys. This joke shames women for doing what society pressures them to do — enhance their appearance and visually signify their status— and neglects all the ways this pressure can harm women. It also suggests that enjoying pretty things diminishes a woman's intelligence and makes her like an animal, while valuing material objects is just viewed as a sign of wealth for men.

Cats "only want you when they want you," reads a post on Return of Kings comparing cats to women. One minute, they'll cuddle you, and the next, they'll scratch you. First of all, humans might want to stop and consider whether their cats are unhappy with them for a reason — and the same goes for women. Women are fully capable of being rational human beings — yes, even on their periods — and there isn't any evidence showing that women are more impulsive than men. Different studies have found mixed results on which gender has better impulse control, and many have found no differences at all, according to a review in Frontiers in Psychiatry. So, rest assured, women are not going to suddenly turn around and scratch you while you're cuddling them.

"A cat spends most of its time eating, exploring (to hunt or steal), sleeping, lazing around and preening itself," reads the Return of Kings post. Popular stereotype says that women are vain because they get pleasure out of looking in the mirror and doing themselves up. Actually, women often pay more attention to their looks than men because they feel inadequate otherwise, not because they love looking at themselves. A survey by Glamour showed that the average woman has 13 body-hating thoughts per day — the opposite of vanity.

I just thought this was worth noting, because even if you disagree with all the above claims, this one is indisputable. You cannot be exactly like a cat unless you have paws, and women often tend to fall short on that front. Women also don't have tails or whiskers, which make them rather inadequate house pets. If you're looking for a feline companion, I would not suggest adopting a woman. There really is no substitute for a good old four-pawed, whiskered cat. But then again, if you've been going around teaching people how to pick up women based on the assumption that they're like cats, you probably don't deserve the affections of a cat or a woman.