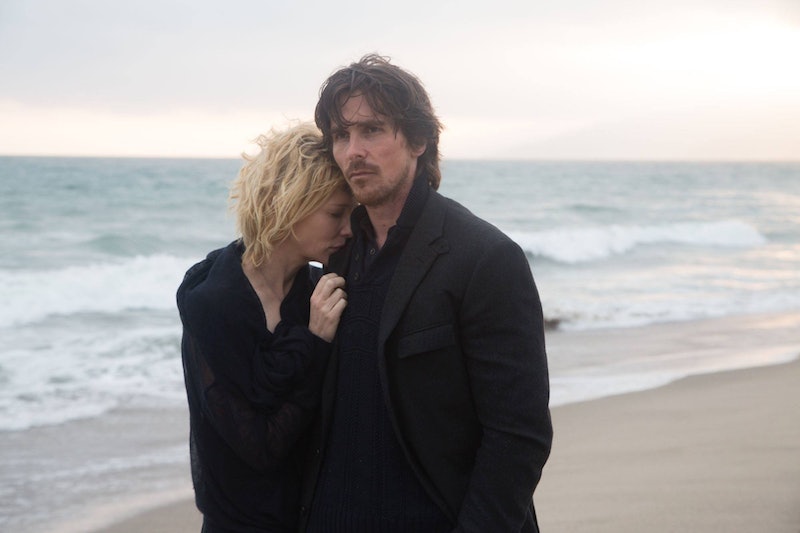 Christian Bale attended Sunday night's Oscars as a Supporting Actor nominee for the financial crisis drama, The Big Short, but the inspiration behind his next project is much more obscure than a recent economic meltdown with global repercussions. Although Knight Of Cups isn't a true story , Bale plays a screenwriter at a personal crossroads. Family drama and loss push Rick farther into the hedonistic playground occupied by industry elite, and he's driven to face some harsh internal truths and the objects of past mistreatment. Director Terrence Malick is infamous for both his unconventional methods and long stretches between film releases, but what drove this particular piece of work?

Rick is not based on one existing Hollywood screenwriter, and Knight Of Cups doesn't follow one real-life experience. The film has its roots in a couple of vintage morality tales, including the 1698 allegory, The Pilgrim's Progress From This World To That Which Is to Come; Delivered Under The Similitude Of A Dream. (A catchier title than Knight Of Cups? You be the judge.) Author John Bunyan composed the story of Christian (who is a Christian, because that's how allegory works), who seeks forgiveness for his sins on his journey to the afterlife. According to Yahoo, The Knight Of Cups script takes more than the human need for absolution and mercy from The Pilgrim's Progress; the script includes passages and quotes taken directly from the text. The movie also pulls from another quest narrative, the "Hymn Of The Pearl" from the Gnostic Acts Of Thomas. In those verses, a young boy on a mission is waylaid by seductive forces before he sets himself back on his righteous path. The shared theme is clear: life is full of temptations, and most aren't born with a perfectly calibrated moral compass. Choice reigns supreme.

Reportedly, this context is more than what Bale was given before filming began. At a press conference for Knight Of Cups at the Berlin Film Festival, Bale told journalists that he appreciated the being left in the dark. "The nice and very interesting thing in Terry's approach was that he didn't tell us what it was about," Bale said, as reported by IndieWire. "[Knight of Cups] was something he had gestating for a long time; he really just gave me the character description." While others on set had the script, Bale never did get his own copy. "I'd try to look over their shoulder to see what I was going to be told," the actor said of his scene partners.

This process would have put any number of other actors on edge, but Christian Bale is as nontraditional in his craft as his director. A devotee of Method acting, Bale didn't mind not knowing what scene he'd be filming day to day, let alone not being aware of the film's centuries old source material. "[Malick] liked to call it 'torpedoing' us, with different actors and nonactors, to get a very real response," Bale said, as reported by The Hollywood Reporter. Did Bale and Malick's collaboration succeed in creating a 21st century parable that's true to the character they developed, or did a strange shoot make for a confounding movie? Work through your own response when Knight Of Cups hits theaters on Mar 4.