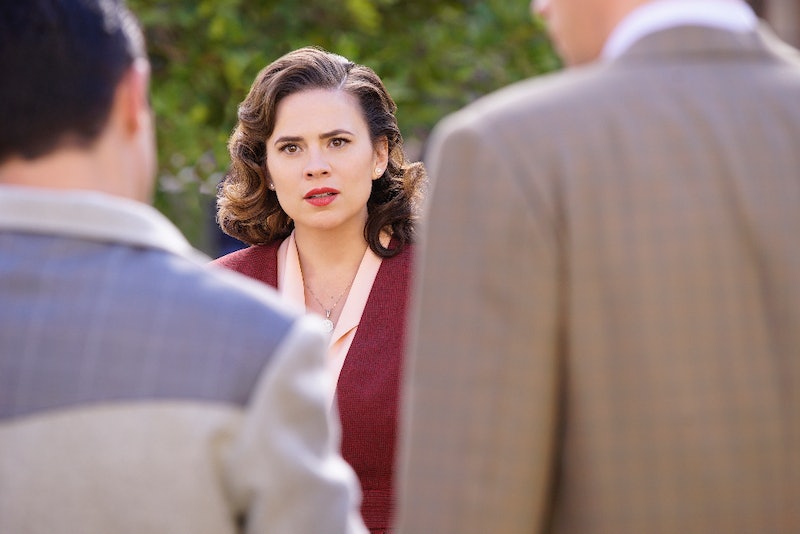 The second season of Agent Carter ends Tuesday and I for one am not ready for the Marvel series to be over. Will Agent Carter be renewed for Season 3? There are villains to mask, connections to Doctor Strange to unravel, and the hopeful conclusion to a very stressful will they or won't they 'shipping situation in the finale. All of that has already got me wanting more. Update: On May 12, ABC cancelled Agent Carter, as reported by The Hollywood Reporter.

Earlier: TVLine's Renewal Scorecard calls it a long shot, which is unfortunate but not inaccurate. The ratings for Agent Carter Season 2 have not been stellar. Hayley Atwell booked another ABC pilot titled Conviction — which also stars former Walking Dead actress Emily Kinney and was co-created by Jessica Jones writer Liz Friedman. Dominic Cooper, who granted is still a guest star as Howard Stark, is also headlining the upcoming AMC series Preacher. When actors begin to move on, that is typically a sign that a show is about to be canceled. The fact that ABC is going ahead with a pilot order for the Agents of S.H.I.E.L.D. spin-off Marvel's Most Wanted featuring the characters Bobbi Morse and Lance Hunter doesn't bode well either, as much as I would enjoy watching those bickering spies on their own show.

That said, if anyone can make it happen, it's Hayley Atwell. Agent Carter has a short episode order and has previously aired at mid-season, which means I'm still holding on to hope that they could work something out, scheduling-wise. The fans this show has may not be large in number but they are devoted. Agent Carter is telling a focused, simple story with well-drawn characters and that has payed off. The penultimate episode served us both a dazzling, silly musical number as well as one of the best acted scenes between Jarvis and Peggy, which also did an excellent job commentating on what it means to be a superhero.

I think the fact that the show can operate within the Marvel Cinematic Universe without being tied down to motion picture releases is another benefit. The show strikes a balance between Agents of S.H.I.E.L.D., which is super tied into whatever the Avengers are up to, and Netflix shows like Jessica Jones and Daredevil that are pointedly disconnected.

Can you believe that, in the story, Peggy still hasn't left the SSR to form S.H.I.E.L.D. with Howard Stark yet? There's so much more story to tell, and they need a Season 3 to do it. Simply put, Agent Carter is one of the best comic book shows on television right now. I'm bummed that the show's renewal prospects aren't better. Agent Carter deserves to stay on the air and keep telling Peggy's story.