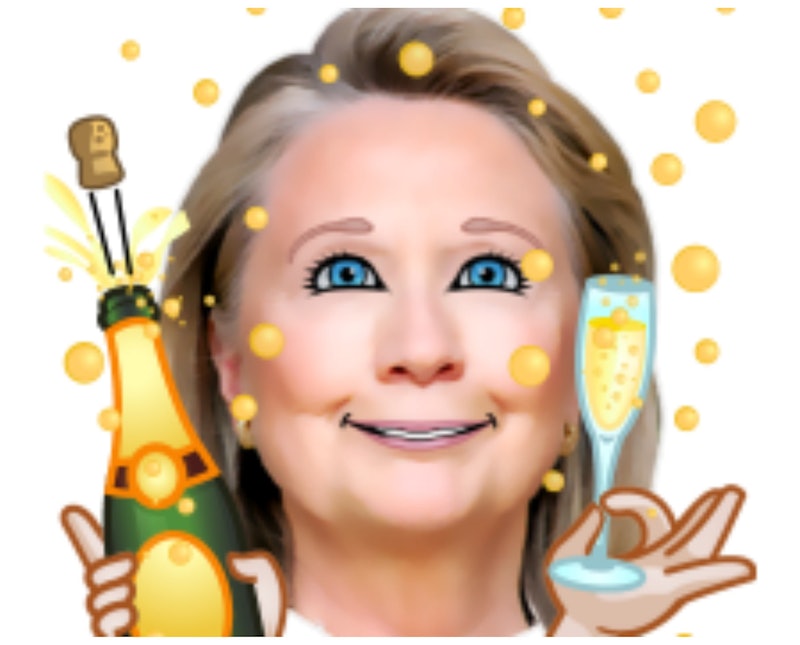 Hey guys, did you know that this year we get to elect a new president? Oh, you did? OK, cool. I wasn't sure if you've noticed how, like, you know, the entirety of media headlines these days are related to the election. If you, like me, are sad and tired of talking about it but you feel like you have to because it's important, maybe try texting about it. Maybe try texting about it with EmojiFace's Presidential Candidate Emoji for Super Tuesday! Yes, you can now send an emoji of Hillary Clinton popping champagne. What a world we live in.

EmojiFace, the app that brilliantly turns your selfies into emoji, is rolling out a slew of presidential-themed additions just in time for Super Tuesday — the single most important day for campaigns thus far. 11 states will be voting in primary elections on March 1, including Massachusetts, Texas, and Vermont. Tensions are high. Stakes are higher. I'm going to be sending everyone I know Bernie Sanders avatars to deal with all the pressure. And because he looks especially cute as an emoji.

The EmojiFace Presidential collection lets you add Hillary Clinton, Bernie Sanders, Marco Rubio, Ted Cruz, and Donald Trump to your emoji keyboard, with each of them featuring six "looks" — you know, Bernie yelling about the revolution, Hillary wearing a rainbow of pantsuits, that kind of stuff.

You can also steal the looks for your own emoji. Wanna rock that boss shades-and-iPhone look from Big Hil? You can! So can any of the candidates! Even Donald Trump!

In addition to the specialized candidate looks, you can also add a whole slew of emotions to their very presidential faces. Give Hillary heart eyes! Give Bernie swirly eyes! The world is your emoji keyboard, friends. Go forth and text.