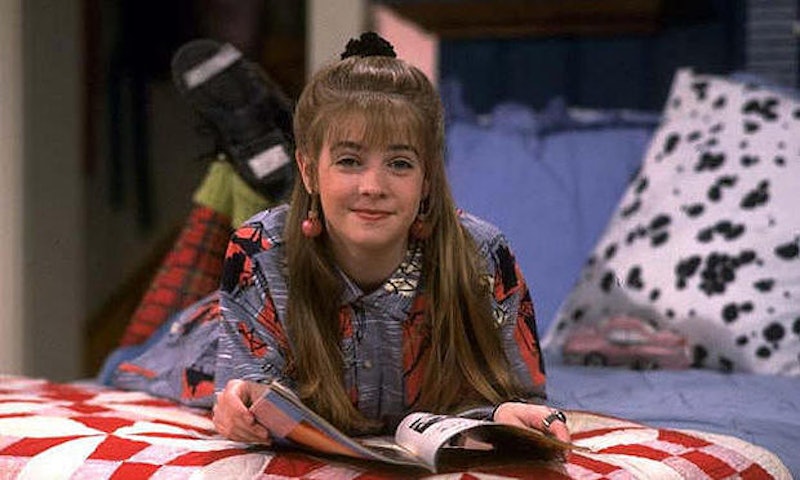 When I was a kid Nickelodeon’s programming was way different than it is now. It wasn’t really part of the machine that the network now has, churning out stars who I can no longer identify with. Shows like Hey Dude, Salute Your Shorts, and The Secret World Of Alex Mack were entertaining, appropriate, and, well, awesome. My favorite, though, was Clarissa Explains It All. It was must-see television for me as a kid, so much so that recently I wondered — what is it like to watch Clarissa Explains It All as an adult?

If Miley Cyrus was the star of the Disney Channel during her heyday, Melissa Joan Hart, who played Clarissa, was the female equivalent on Nickelodeon (though, of course, over a decade apart). Hart ruled the Nickelodeon school, and even though Clarissa Explains It All didn’t last that long (five seasons over three years), it still holds a special place in my SNICK-loving heart. Hart eventually headed over to ABC’s TGIF lineup for Sabrina, The Teenage Witch, and I was never the same. That’s why it’s so great that you can see shows like Clarissa on streaming services. Just like reliving my childhood! And, speaking of reliving my childhood, here are all of the thoughts I had while I was watching the Clarissa Explains It All pilot as a grown-up.

OMG, Melissa Joan Hart looks so young here… was I ever that young? Were any of us?

2. Clarissa Wants Her Name To Be Jade

I mean, Clarissa is a pretty cool name, but Jade? Jade is like the most popular moniker a high school girl could wish she was named!

I never realized how fast she breaks the fourth wall — I knew it was a big selling point of her show, but a pilot is never a show’s shining example.

Clarissa's outfits are serving up some Baby Sitter's Club realness.

5. Clarissa Is A Germophobe

Was that a thing in the early 1990s? Did Marc Summers, who worked at Nickelodeon at the time and has spoken openly about his germophobic status, have a hand in this?

Clarissa’s mother’s insistence on health food was pretty ahead of its time. There have always been people making their own wheatgerm, but that was totally not mainstream.

I forgot her father was a “modern architect.” How did he make money all of those years? How many teacups houses can one locality have?

Nickelodeon held the “drawings in opening credits” thing — remember My Brother & Me?

Clarissa’s dad, Marshall, was on Mad Men with another Nickelodeon star — Larisa Oleynik, aka Alex Mack.

I love the guy, but he lives in a kiddie pool… how does he not get out? Is he just really well trained? Doesn’t it smell?

Sam has to be in love with Clarissa from day one, because no boy would do all of that stuff for a girl without being in love.

Sam’s dad was a single father — there’s no mention of this mother. That also sounds pretty groundbreaking for 1991.

Ferguson brings Clarissa’s training bra in for show and tell. Can you imagine kids being scandalized by a training bra today? They would never.

Clarissa's humor was actually pretty advanced — Clarissa makes a joke about the mafia taking down Sam and his father in a hail of bullets. This is Nickelodeon! She also talks about school liability insurance, which is obviously another adult joke. I don’t think that today’s Nickelodeon shows have a smart, adult element.

The references on the show are not exactly timely (but I guess they were timely for then). Who is Doug Henning? (He was a magician — I did my research.)

16. The First Sam Joke Of The Series

“Why doesn’t that kid ever use the door?”

In today’s world, the Wally Butterman kid who beats Sam up at football practice would be expelled for bullying.

Her computer is so big! The simulated games were always my favorite part of the show. Are we sure that Clarissa doesn’t have a startup today? She makes her own video games, for God’s sake.

Man, what a difference 25 years makes, huh? No matter how much time has passed, Clarissa Explains It All is still one of television’s best children’s series.

More like this
'Friends' Star Maggie Wheeler Offers Support To Matthew Perry After Reading His Memoir
By Alyssa Lapid
Mel B Thinks These Celebs Should Play Them In A Spice Girls Movie
By Alyssa Lapid
The Banned 'Friends' Ad Shows Monica As You’ve Never Seen Her Before
By Sam Ramsden
Twitter Is Having A Field Day Over Mr Blobby’s Costume Selling For £62k
By Catharina Cheung
Get Even More From Bustle — Sign Up For The Newsletter
From hair trends to relationship advice, our daily newsletter has everything you need to sound like a person who’s on TikTok, even if you aren’t.