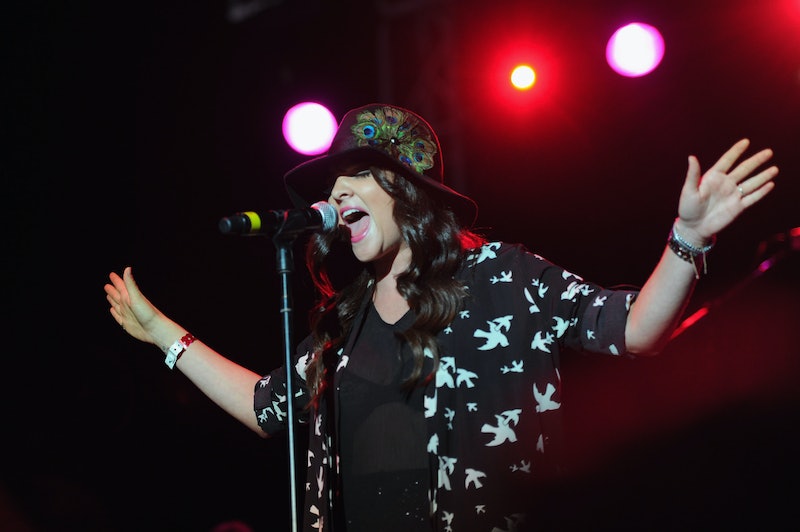 They saved the best for last — but this contestant is no stranger to the stage. 34-year-old Alisan Porter, best known for her childhood role as "Curly Sue," blew The Voice coaches away and received a much deserved four chair-turn with her performance of Linda Ronstadt's "Blue Bayou." The best part is that the coaches didn't even recognize her until she told them who she was — totally forgivable, as she was 9 when she played in her career highlighted role — which means that she earned such high remarks on her talent alone, and not on her early fame. She proved to both the coaches and America that her childhood acting career is behind her and that she's serious about pursuing a new career in the music industry. Tonight, Porter proved that she was destined for musical greatness, and that she could achieve it on The Voice .

Porter quickly won over the coaches with her show-stopping performance, but earned their respect even more with her touching story. The child star battled addiction following her early fame. Thankfully, she was able to turn her life around and is now celebrating eight years sober with a family of her own. Now, she's able to focus on her singing career — and the music industry will truly benefit from it. Porter has an incredibly natural talent that deserves to be heard on The Voice.

What's even better for Porter is that she's with the best coach possible — Christina Aguilera. While the coach has no wins under her belt, she's no stranger to the competition. Aguilera also has a reputation of working with and training extremely talented female singers. She'll no doubt be able to refine and shape Porter's already powerful voice. Together, they'll be able to take Porter's talent to the next level and prepare her for a very successful career in the music industry. Porter is one to watch in this competition, and I can't wait to see her journey.

More like this
Harry Styles' 'X Factor' Audition Didn’t Start Off As Well As You Thought
By Jake Viswanath
What’s New On Netflix: 'Never Have I Ever' & 'Indian Matchmaking' Return
By Arya Roshanian
Everything To Know About The HBO Max & Discovery+ Streaming Service Merger
By Brad Witter
What’s New On Netflix: 'Bridget Jones’s Diary' & 'Monster-in-Law'
By Arya Roshanian
Get Even More From Bustle — Sign Up For The Newsletter