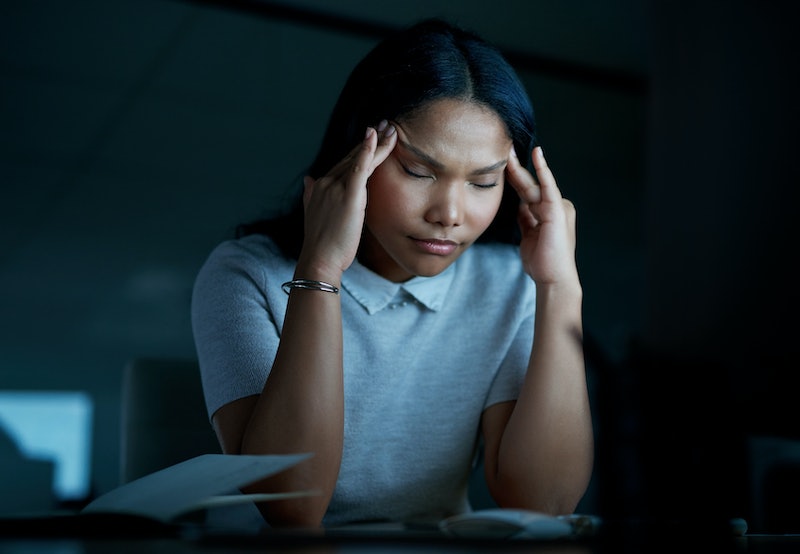 You'd be hard-pressed to find a woman who has never dealt with PMS. At least 85 percent of menstruating women confront PMS symptoms every month, from menstrual cramps to swollen breasts to irritability. However, Premenstrual dysphoric disorder (PMDD) is a beast entirely of its own. Affecting between two and 10 percent of women, PMDD can most easily be described as PMS on steroids.

The symptoms are extremely similar — anger, depression, difficulty concentrating, intense cramps, bloating — except they are incredibly heightened and they can feel impossible to control. Doctors aren't sure yet exactly why PMDD occurs in some people and not in others, but it's thought that individuals who already struggle with depression and anxiety are more likely to have the condition. Because PMDD affects such a small percentage of the menstruating population, and likely goes undiagnosed for many women, I wouldn't be surprised if you don't know much about the condition.

But instead of bombarding you with all the facts and statistics about the condition, here's the one tell-tale sign that you're suffering from PMDD: your mood swings are so out of control before your period that they're affecting your relationships. Here are five examples of how that might play out in your life.

Mood swings are bad enough to deal with on your own. Something as little as trying to find your keys can send you into a rage when you're PMSing. When they start to affect the people around you, though, is when you've probably crossed over from PMS land and into PMDD territory.

Because PMDD tosses you onto an emotional roller coaster, you might feel sad one second and inexplicably angry the next. Usually these fierce arguments happen with the people we know the best, whether it's your BFF or your partner.

Sit down with one or two people you're closest with and ask them if they feel like you're fighting more often during this time of the month. They might be able to offer some insight you haven't yet realized.

... And You Find It Especially Difficult To Deal With People At Work

PMDD can interfere at work just as much as it can in your personal life. It gives you an extra layer of anxiety, stress, and anger that doesn't exist with those who only deal with PMS. These heightened feelings can make you react to the environment around you differently than you would when you're feeling like yourself.

Are you always getting into little spats with your coworkers when you're PMSing, or arguing with your boss over the most minor things, to the point where they all find it burdensome to work with you? First of all, don't beat yourself up. It's not your fault. You might want to speak with your doctor, though, because it could be very likely that you've got a PMDD diagnosis on your hands.

You Feel Too Hopeless To Interact With Anyone Before Your Period

It doesn't matter how fantastic you feel during the rest of the month; PMDD has a way of stripping you of all positivity and leaving you feeling totally hopeless. Some of the psychological effects are depression, feeling overwhelmed, and feeling sensitive to rejection. Experts say all of this might be connected to the low levels of serotonin in your brain that occur before your period, the chemical that controls moods and sleep.

As a result, you might experience social withdrawal; when you feel this down, the last thing you want to do is hang out with a group of happy people. You turn down your friends over and over again, no matter how many times they invite you to come out for drinks. It's not like you don't want to go — it's that the effects of PMDD literally don't allow your brain and body to get you there.

Your Friends Have Made Comments About How Bad Your PMS Gets

Nobody likes it when their friends tell them they're tough to deal with, but in some cases, this feedback is worth listening to. PMDD isn't the kind of condition that takes time off. It visits you every single month, so your behavior will reflect that, and the people closest to you will notice a pattern.

If they've made remarks before about your uncontrollable mood swings, or the fact that you don't act like your normal self when you're PMSing — and if you know they are trustworthy friends — consider listening to them. It could be the very thing that inspires you to go to your doctor and get some help to beat this thing.

Everyone's annoying when you're emotions are heightened, and nobody is exempt from your disdain if they're being offensive in the slightest bit. Women with PMDD also feel extremely fatigued, and they're in a lot of pain during the week leading up to their period, which only amps up the level of irritability.

Put all these together, and it's not surprising that you get into a disagreement with a perfect stranger who cut you in line for a coffee. Maybe you raise your voice, maybe things escalate. If you know that you wouldn't normally react like this, but it happens every single month, know that this feeling of being out of control is a very common symptom of PMDD.

See a medical professional before you self-diagnose anything. There are several different treatment options out there, and you can decide with your doctor which one will help you deal with PMDD. Above all, remember that periods don't have to miserable — you don't have to be miserable — so don't wait another second to get yourself checked out if any of the above sounds all too familiar.