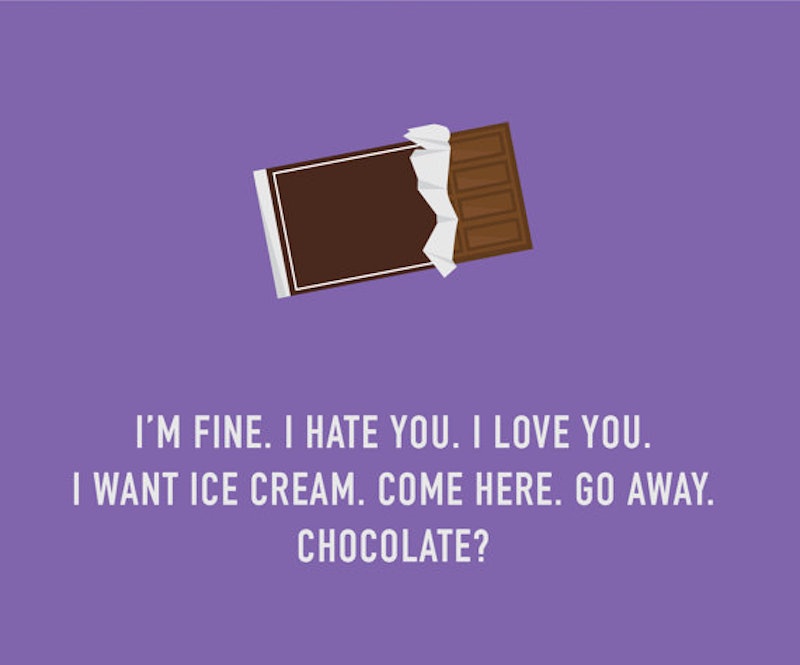 What do you really know about premenstrual syndrome, or PMS? That it's a gag in sitcoms, a frequent running joke with stand-up comedians, and generally associated with women going insane or weeping in corners? The facts about PMS are a lot more complicated, and involve scientific arguments, degrees of severity, worries about primary and secondary symptoms, and even theories about dosing yourself with saffron. It's not a simple world out there for PMS sufferers; everybody's got an opinion, and many of them are backed up by myths about what PMS actually is.

Here are the basics: premenstrual syndrome is supposed to occur in some women in the time in their menstrual cycle immediately before their period. The menstrual cycle, which averages at about 28 days, isn't just "period off" and "period on;" it's a constant series of stages in which the body prepares for ovulation, ovulates, and then has a period to rid itself of the lining of the uterus. The point just before the period is the vulnerable point for PMS sufferers, who associate it with a variety of physical and mental symptoms that can make their lives more difficult.

So what can you really believe about PMS, and what's the truth? It may be more complex than you'd anticipated. Let's go dispel some falsehoods about premenstrual syndrome and the human body.

1. "It Affects All Women, Every Month"

If you've never experienced anything untoward in relation to your period, don't worry; PMS is not actually seen as a universal problem in women by physicians, though many media outlets report it like that. Actual agreement on how far it's actually spread depends on beliefs about what defines it, and that can be tricky, but The Journal Of Women's Health said in 2011 that 20 percent of all women suffer it badly enough to find medical attention, while WebMD puts it at a more conservative eight to 20 percent at the "moderate to severe" symptom level. And a French study in 2009 showed that it's not static, either: 72 percent of the women surveyed over a year fluctuated in how severe they reported their symptoms to be.

2. "There's Universal Agreement About Its Existence"

Surprisingly, science isn't really agreed on whether premenstrual syndrome is a "thing" or not. Many different voices put together ideas about what's actually happening in women's bodies and where the idea of PMS came from, so it's not something that can be bandied about as a complete medical certainty.

A study from New Zealand and Canada in 2012 garnered a lot of attention for surveying many different studies about PMS and finding radically different symptoms and answers in all of them. Did this mean PMS didn't exist? Was it all made up? Some researchers think so; they worry that it's part of the "medicalization of women's moods," and entrenches old ideas about female irrationality and over-emotionality. But looking at the survey reveals that many of the studies were tiny, both in scope and length: some featured only 10 participants, and many only looked at one menstrual period. Plus, it only looked at mood swings, which, as we'll see, aren't the only component of PMS.

It does seem as if cultural belief in PMS plays a big role in how we see our moods in the 5-11 days before our period, but science also hasn't debunked the phenomenon, either. Professor Kathryn Clancy, a professor of anthropology, pointed this out when discussing the study with TIME: different cultures actually demonstrate different premenstrual symptoms.

This is a pretty simple but weirdly pervasive myth. Despite the "Pre" bit in the PMS name, some people seem to confuse it with the state of actually experiencing a period, when actually it refers to the time beforehand. Yes, actually bleeding from your bits may make you feel cranky/crampy/bloated/whatever, but that's not the time period premenstrual syndrome is addressing.

4. "It Doesn't Have More Complicated Forms"

This is one of the most massive myths about PMS: that it's only one-size-fits-all, and doesn't get worse. In reality, there's a phenomenon called premenstrual dysphoric disorder, or PMDD, that causes such massive effects in the premenstrual period that it's seen as related to depressive disorders. Essentially, it produces a huge depressive episode in the premenstrual period, every month, on the dot. Depressive sufferers and those with familial histories of depression are more likely to have it, and it's thought to be suffered by around 2-10 percent of all women with periods; but it's not well understood or widely acknowledged, at all, despite its crippling effects.

5. "It Only Refers To Hormonal Mood Swings"

The interesting thing about PMS? Hormonal fluctuation can't be pinned down as the key source of mood swings; but frankly, that's only one of the panoply of different symptoms that are part of PMS's ability to annoy and irritate. Hormone fluctuation in the premenstrual period isn't "abnormal" (the body's hormones are very carefully calibrated), but one theory is that hormone metabolites in the brains of some women respond strangely to hormone shifts, causing possible mood differences. We don't actually know.

In the grand scheme of things, though, PMS is about a lot more than just crankiness. It encompasses a lot of physical symptoms, from joint pains and sensitive, tender breasts to sleep troubles and headaches.

Some researchers think the mood swings of PMS are actually secondary to these physiological effects, not actually something shifting in the brain. Being bloated may make us anxious, sensitive nipples and aches may make us irritated and moody, and so on. What could look like a primary symptom may just be a consequence.

6. "It Only Happens In Humans"

This is a really interesting one: we're not the only species to experience shifts of behavior in the lead-up to our periods. Professor Robert Reid, a specialist in clinical endocrinology, reports that "zoologists have noted premenstrual changes in behavior and appetite similar to those reported by women with PMS". Female rhesus monkeys were found to be more aggressive in premenstrual days, while baboons changed how they ate and how often. We don't know enough about PMS and other animals to make any big conclusions about this, but it seems that premenstrual shifts aren't only our problem.

Actually, a lot of science has been devoted to possibly mitigating the symptoms of PMS to help sufferers get through the annoying physical and mental symptoms of the cycle. A study in 2000 showed that SSRI anti-depressants might be helpful for people suffering from PMDD (and, possibly, women with less severe PMS symptoms). And it's not alone: vitamin B6 was touted as a potential help in 1999, while saffron was suggested to reduce severe symptoms in July 2015. Even our eating habits have been targeted: the British Journal of Nutrition published a study in December 2015 that seemed to indicate that Western dietary patterns contribute to PMS symptoms.

In 2003, an article in American Family Physician offered a range of aids for symptoms, from the mild help of supplements of evening primrose oil to more targeted symptom relief like diuretics. Interestingly, the historical treatment for PMS, the hormone progesterone, has been shown in studies to do nothing whatever for PMS sufferers. It looks like the story is a lot more complicated than irrational ladies and disordered hormones.

More like this
This Company Will Send STI Tests Right To Your Door
By Lexi Inks
Wimbledon Alters All-White Kit Rule Amid Candid Period Discussions
By Catharina Cheung and Rachel Mantock
Bustle Newsletter: November 15, 2022
By Hannah Orenstein
The Judgement Tarot Card Wants You To Be Decisive
By Kristine Fellizar
Get Even More From Bustle — Sign Up For The Newsletter