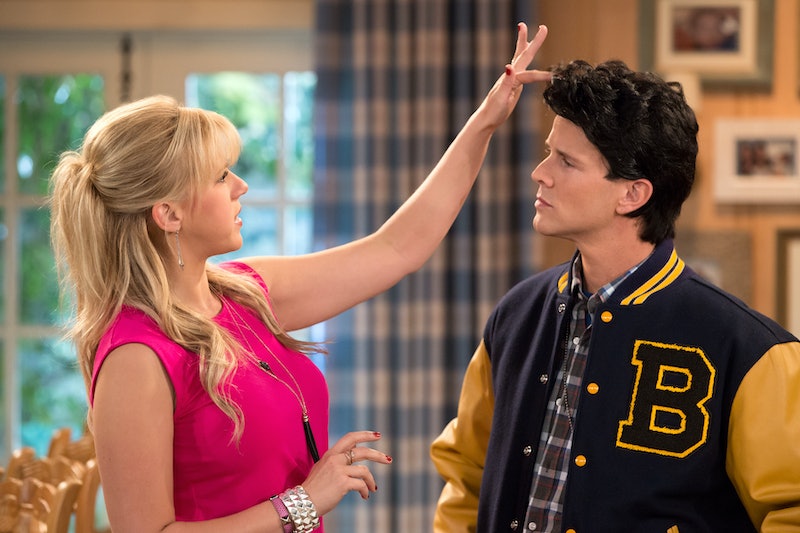 When fans saw Steve Hale, D.J. Tanner's high school sweetheart, show up in the trailer for Fuller House, it was clear just how nostalgic the Netflix reboot was going to get. In fact, the show's trailer strongly hinted that Steve and D.J.'s love story isn't over. In the show's first episode, viewers find out that D.J. lost her firefighter husband a year ago and is trying to put her life back together, while Steve has been married and divorced, despite all along pining away for D.J. Don't cue the "awwws" just yet, though, because Steve is a little too aggressive on Fuller House for D.J. and him to be considered the new Ross and Rachel — no matter how much the show wants you to feel that way.

When viewers meet the now-adult Steve, who's a local podiatrist and the owner of Comet Jr. Jr., in the premiere, he's telling D.J., "I should've just asked you to marry me at the prom." Listen, this is a woman who has just lost her husband and who is making it clear she's not ready for anything serious, and yet Steve chooses to tell her that he wants to date her again and regrets their break up? Not cool. In later episodes, he talks about how lonely he is in his big bed all alone, and continues to both flirt with D.J. and lament their time apart. Yet his actions are never portrayed as annoying or uncomfortable; rather, the show seems to paint it as something sweet and endearing, as just another sign that Steve and D.J. belong together forever.

One of the main reasons Steve's infatuation with D.J. comes off as creepy instead of cute, though, is that the duo first started dating 24 years ago. That's a long time to still be pining for someone, and it's a little sad to think that Steve couldn't find a way to move on from high school. Clearly, the show wants viewers to be invested in the characters' relationship nearly two decades after they broke up, but, after watching his behavior on the show, it's hard to think of Steve as the one D.J. let get away instead of the one D.J. should've run away from. Because, in Fuller House, Steve isn't the funny, charming guy he was on Full House. He's more like a dopey, lovesick fool who comes off as clingy. And clearly, fans have noticed.

While those involved with Fuller House may not consider him to be creepy — "Steve, of course, is being very tactful and respectful, but he wants to see where things go,” Scott Weingart said about Steve and D.J.'s relationship at the premiere, according to People's Choice — it's hard not to see him that way as a viewer. Instead of Steve being an actual nice guy who could make D.J. happy after such a tragic loss, he's become a caricature of the unwanted crush who makes things awkward. When he says things to D.J. like, "We should walk our dogs together every morning, and every night. We should just move in together. You know for the dogs," it's no wonder that D.J. smiles with discomfort at him with a look that implies she's probably wondering how fast she can get away.

This kind of character who just doesn't seem to get the hint was all too common in the '90s when Full House was on, but, in 2016, these characters have become unacceptable. Mainstream audiences are choosing not to overlook how scary a character like Steve would be in real life. As The Atlantic has pointed out, those grand gestures in rom-coms aren't so grand in real life when they're taken too far.

Steve may not be standing outside with a boombox ala Say Anything, but he is seen standing outside her door during a teenager's birthday party, which he wasn't invited to, spying on D.J. He also addresses her as his girl and "honey" to his friends before they've even been out on a real date. Steve's approach to wooing D.J. is a bit tone-deaf, and, while the show may want viewers to feel connected to this love story and treat it as some kind of epic will-they-or-won't-they relationship, Fuller House is going about it all wrong.

He also talks to D.J. about things like first loves finding each other later in life and everything ending happily ever after, and she keeps saying she's not really ready for anything serious. And, even when she's not put off by his persistence, she just seems sad for him. She tells Stephanie and Kimmy Gibbler how she knows how he's still in love with her, as if it's completely harmless. She tries to let him down gently, but ultimately ends up kissing him. D.J., unlike fans, doesn't seem turned off by Steve's approach to getting her back. But, spoiler, she doesn't choose to be with him at the end of the season; she instead chooses herself — a self that wants to be without him.

If Fuller House wants us to hope for a Steve and D.J. happy ending, it could benefit from looking at other series that have done this sort of relationship much better (i.e. The Office's Jim and Pam), studying the boundaries that are never crossed in those scenarios. It's something they manage to do with Steve sparingly. He does mention that he may be coming on too strong after dressing up in a wig and a letterman's jacket to take D.J. out on a date. He also shows that he could be a good partner when playing with D.J.'s kids. These are the moments when you want to see D.J. and Steve get back together.

If there is a Season 2 of Fuller House, I want more of these kinds of moment, the ones that make Steve look like a respectable suitor for D.J. Not the moments that make him look like someone you feel like you're going to have to file a restraining order against when things are all said and done.