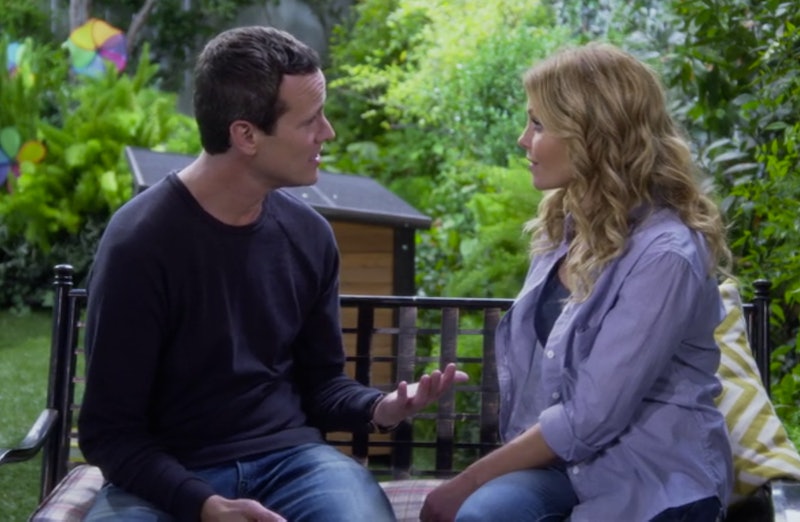 Although it's true that a Season 2 of Fuller House isn't a definite just yet, I can't imagine Netflix wouldn't green light another season of the fan-favorite show. But, I have a very important question: If Fuller House Season 2 happens, will D.J. and Steve get together? Yeah, critics have been unrelenting in their disdain for the Full House sequel, but that doesn't mean the series wasn't fans' guilty pleasure after it premiered on Netflix on Friday, Feb. 26. And, part of that guilty pleasure was D.J.'s high school boyfriend Steve Hale returning to woo the eldest Tanner sister.

Fuller House is acutely aware of the fact that its fan base wants Full House nostalgia and, though the Netflix series is shameless in its references to the original series, I must thank it for bringing back the romance of D.J. and Steve. Even if the corniness level was off the charts when Steve and D.J. relived Ghost's infamous pottery scene while making hamburgers, Steve hanging out in the Tanner-Fuller-Gibbler house just feels right. So though I loved the empowering end to Season 1 where D.J. chose herself instead of Steve or new character Matt, part of me had really wanted D.J. to choose good old Steve to be her main man.

While D.J.'s husband died before Fuller House takes place, the show doesn't really have D.J. — like her dad on Full House before her — too upset about her deceased spouse. (Though the show gave fans a Danny Tanner episode, where D.J. did ask her dad how he knew when it was OK to start dating again.) However, being new to dating again was what led D.J. to not choose either guy in the final episode of Season 1, considering that Matt was the first person that she agreed to date since her husband Tommy died, she clearly has strong feelings for the sexy vet.

However, that does not mean I'm writing off Steve. Honestly, Steve deserved a better plot than just being divorced and still pining after D.J. for all these years. But, like any good Full House fan, of course I want D.J. and Steve together. I mean, Steve's the voice of Aladdin!

TVLine even wrote that a D.J. and Steve legit relationship should go down in Season 2. However, with Season 2 not actually existing just yet, Steve might not get a second chance (err, well I guess third chance?) with D.J. Tanner-Fuller. There is hope, though, since the actors of Fuller House want to keep the party going. "We're all very hopeful and crossing our fingers that we get to do it again," Kimmy Gibbler actress Andrea Barber said in December to People magazine. "It was so much fun doing the first 13 that I don't feel finished. I definitely want to do more." And, John Stamos confirmed that sentiment by saying at the People's Choice Awards, "There will be a lot more than one season, for sure."

So, whether you are Team Steve like Kimmy or Team Matt like Stephanie, there will most likely be a chance for D.J. to date again. And, if Fuller House even gets a fraction of the nine seasons that the original Full House got, I have faith that D.J. and Steve will date again (Steve even called D.J. his soul mate!) — and relive the magic of their original high school romance.