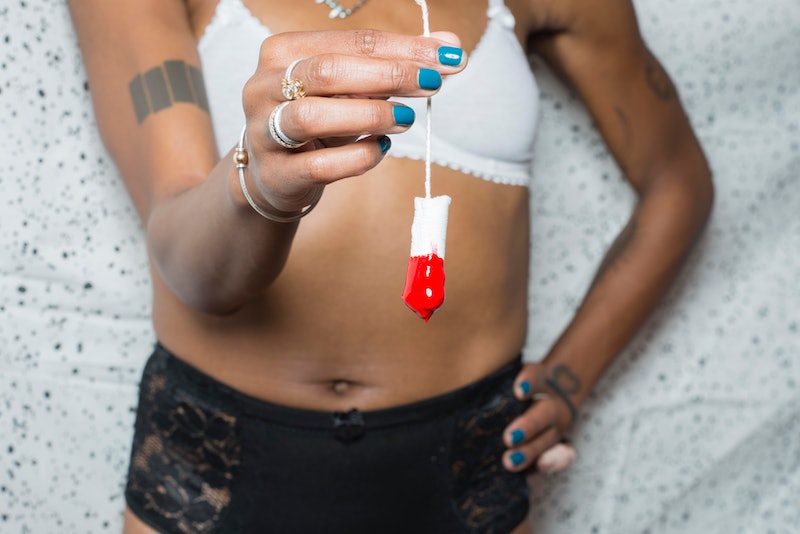 Even though it's a process about half of people undergo at some point in their lives, menstruation is still often a source of shame and secrecy. Through a survey called "Talking About Periods – An International Investigation," the menstruation app Clue just confirmed how sitgmatized periods really are. In partnership with the International Women’s Health Coalition, the app asked 90,000 people from nearly 200 countries how they felt about their periods and how they talked about them — and the results make it clear that the menstruation taboo not only is extremely prevalent, but also can affect many areas of people's lives.

The survey found that over 5,000 euphemisms for periods exist in different languages. While English-speakers might call their periods "Aunt Flo" or "that time of month," the French are want to say "Les Anglais ont debarqué," which means "the English have landed." While these expressions are objectively funny, the need we feel to speak about periods so indirectly is a bit troubling. Respondents in many countries, including 25 percent of Russians and 41 percent of Ukrainians, said they weren't well-informed about their periods, which the silence surrounding menstruation could exacerbate. Though 86 percent of participants overall felt comfortable talking to women about periods, only 34 percent felt comfortable doing the same with men. The slang terms weren't all the most period-friendly either, with English phrases like "shark week" and "bloody Mary" being commonly used.

The view of menstruation as something not only unspeakable but also threatening can interfere with the lives of people with periods in significant ways. 17 percent of respondents said they'd missed something important, like school or work, because they were scared of someone finding out they were menstruating. The most common countries for this to happen in were Australia and Brazil, with 24 percent of respondents in each country saying their periods had stood in the way of attending something important. This can also be a problem in countries with inadequate access to supplies: 21 percent of girls in Seirra Leone and 30 percent of those in Afghanistan have skipped school because they had their periods, according to a UN and Emory University study.

“Many women and girls in developing countries face a host of challenges when it comes to their period — from not being able to access hygiene products to being forced to miss school because of a lack of toilets. This is compounded by the fact that most don’t receive comprehensive sexuality education, so they are unaware of how their bodies work,” said Françoise Girard, President of the International Women’s Health Coalition, in a press release provided to Bustle. “We need to do a lot more to make sure women and girls know and are comfortable speaking about their sexual and reproductive health and their rights.”