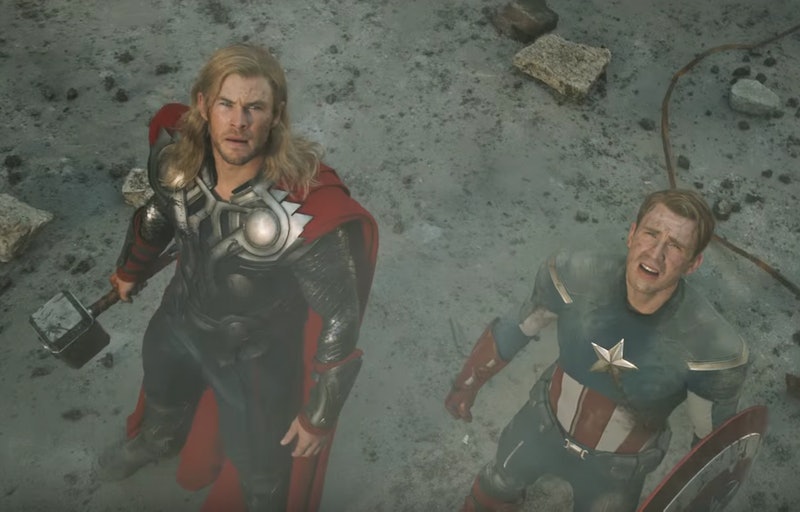 Now, The Avengers doesn't actually have too many plot holes, at least not ones that keep me up at night. As with any other well-made popcorn film, The Avengers is so entertaining that it makes you forget about any mistakes or issues seen along the way. It's like Back To The Futurein that regard — who cares that time travel makes zero sense and that Michael J. Fox maybe, almost, hooked up with his own mother? That movie is a classic, plot holes be damned! Like Back To The Future, The Avengers might not make too much sense at times, but despite plot holes like the 11 ones below, it sure is fun to watch.

To all you Hawkeye lovers, bless you, but the biggest plot hole in The Avengers for me is Hawkeye's presence on the team. I get that he works for SHIELD, and he's crucial to the plot in that he gets brainwashed by Loki, but what makes him crucial to the team? He's good with a bow, sure, but what skill, exactly, makes him different than any other normal human SHIELD agent? I just don't get it.

2. How Is Jane Foster Safe From Loki?

Early in the film, when Thor first joins up with the Avengers, Nick Fury tells him not to worry about Jane because she's been whisked away to some remote island far away from the U.S. for a top secret research job. But Loki can teleport. He's an alien with magical powers, and I'm pretty sure that he could find Jane Foster no matter where she is. There is no way Loki couldn't or wouldn't just zap himself over to her and kidnap her just for fun.

3. Where Does Captain America Get His Money?

Captain America, aka Steve Rogers, is not working for the government when Nick Fury recruits him to SHIELD, and he's been dead for 60 years. So how does he have money? Did the government set up a trust for him? Is he rich? Does he have a day job? How can he afford to make a bet with Director Fury? (Also, does SHIELD pay well? I feel like it's a job that should pay well.)

4. How Does Bruce Banner Get Into New York?

During the final battle, Bruce Banner turns up just in time to Hulk out and help the Avengers defeat Loki's alien army, but how does he even make it there? He arrives after the police have evacuated the surrounding area and have set up some kind of perimeter. So that means he would have to break through a police barricade of some sort, not to mention travel miles and miles to reach them. All in his human form.

5. Why Does SHIELD Put Bruce Banner On The Helicarrier Without Warning?

I get that they kinda, sorta trust Bruce Banner not to Hulk out on the helicarrier, but why wouldn't they at least warn the guy that he's going to be stuck on a massive aircraft? Seems a bit insensitive to me.

Speaking of SHIELD's Helicarrier, what in the world is its purpose? It's a huge, mobile center of operations, so I can see its appeal, but it seems like a dumb place to house your Avengers, especially when they're being hunted down by a crazy alien god. They don't need all those planes or toys. All the Avengers need is a lab and maybe a few planes and toys, not a stockpile of alien weapons still in the testing phase. (Thanks for that, Fury.)

The alien lizard things that attack New York are a perfect example of something that makes no sense, but is so exciting it really doesn't matter. Is it an animal, a weapon, alien technology or an alien species all its own? Who knows? All fans care about is that it's enormous and deadly, but give it any more thought and it will just leave you with about a billion more questions than answers.

Honestly, Director Fury has done a lot of shady things, but the fact that viewers are supposed to trust a man who is so manipulative that he soaked Agent Coulson's treasured vintage trading cards in blood just to make the Avengers feel guilty is seriously disturbing.

9. WTF Is The Tesseract?

Seriously, what is the Tesseract exactly? Why is it so magical? If it's so vital to SHIELD, why send it back with Thor so easily in the end? Please explain.

10. How Are They Communicating?

Ah, the famous missing earpieces gag. You'll find that characters are always lacking earpieces in almost every single action movie, despite the fact that they could be talking to each other in the midsts of explosions and other varying degrees of danger. Do they have microphones implanted in their teeth? (I saw that on a spy show once.) Do they just have magical SHIELD technology that gives them the ability to communicate? What is this sorcery?!

11. Why Are They All So Ridiculously Good Looking?

Even the Hulk is attractive in Hulk form, guys. It's just not right.

The Avengers may have faults, but it features many a close up of Captain America, so, all in all, I think it's just fine.