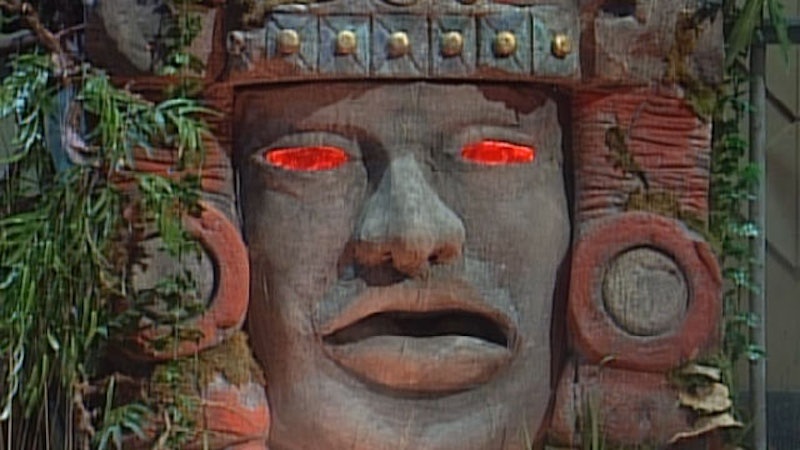 Plotwise, the film is going to center around three siblings playing for their lives, and probably on the hunt for some strange artifact hidden in the aforementioned hidden temple. My guess is Lawrence of Arabia’s headdress, but I guess anything is possible. And I get the sneaking suspicion that with this film, they’re going to cut out all the bulk (read: useless trivia and awkward safety precautions) and make the temple into the best version of itself.

Now, I understand that once the nostalgia fades away, you may be skeptical about this. In that case, hear me out, because I think there are some valid ways this TV movie could work better than the original. For instance ...

1. None Of Those Mouth Guards

Oh, man. No matter how cool you think you are as a contestant, the fact remains that you look ridiculous with that mouth guard in.

2. Seeing Green Monkeys In Real Life Is More Exciting Than Seeing Them On A T-Shirt

Not that the T-shirts weren't a boss addition to any wardrobe. Still, why wouldn't you want to see a literal green monkey in the wild?

3. The Thrill Of Finding Out Which Celebrity Will Voice Olmec

My money's on Jack Black, but I also think that Katy Perry would make a suitable choice.

4. The Potential Stakes Of Winning (Or Losing) The Game

The best you could hope to win on the old show was, like, a sick mountain bike or, I don't know, a Super Nintendo. I kind of get the feeling that the characters will be battling it out for a lot more in the movie ... probably their lives.

5. Likewise, The Possibility Of Someone Getting Offed As They Cross The Moat

If you are a child and you fail to cross a body of water in the shadow of a hidden temple, I get the feeling that it's gonna be a little more lethal than on the show.

6. They Can Really Go HAM On Set Design Here

Now the actual temple doesn't have to be a weird, senseless labyrinth. It can be a cohesive, sensible labyrinth.

7. It'll Be Fun To Bring The Nightmare Fuel That Is The Temple Guards To A New Generation

Don't even front. You know those guys always made your heart stop when they popped up.

I'm sure they're bringing back the Steps of Knowledge, but we don't actually have to be quizzed about Macedonia, right?

Dude, between Olmec and Kirk Fogg, there was so much retreading of what hardcore viewers already knew. You don't have to tell me what to do with the shrine of silver monkey. This show is my life.

If you're still unconvinced, I guess that's fine. The choice to see the movie is yours, and yours alone. But I'm definitely psyched to see how Legends will be re-branded for a post-Hunger Games world.