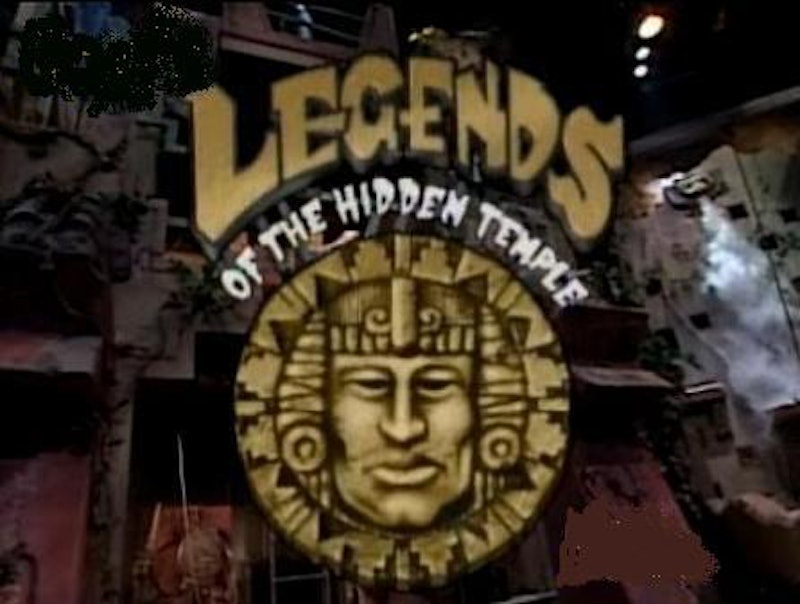 The Nickelodeon of the '90s not only included the amazingness that was Hey Arnold! and The Amanda Show, but it also included something that the Nickelodeon kids of today are just plain missing out on: Legends of The Hidden Temple . The show, which ran from 1993-1995, was an action-packed game show that featured real kids as they encountered obstacle courses — both physically and mentally challenging — with the goal of getting the ancient artifact. Basically, it was like Indiana Jones for kids. And, if you were like me, you secretly wished you could be a contestant on the show every time you watched. Well, now it's time for all of us to relive the magic — sort of. Instead, Nickelodeon is planning on reviving Legends of The Hidden Temple in the form of a television movie based on the original intentions of the obstacle course.

The TV movie is said to be following a group of three siblings as they fight for survival amidst their adventures exploring a temple. And, subsequently, the made-for-TV movie is said to contain elements from the original game show concept. But this time it's all coming to life for the fictionalized contestants. My mind can not stop reeling, because, that's right, all of the goodness from the '90s show is coming back. And, if Nickelodeon wants to do this loosely-based revival thing right, here are the things from the original game show that need to be in the movie.

Nothing makes my heart happier than the fact that the show's very own Olmec is coming back. The Legends of The Hidden Temple figurehead is basically one of the major aspects as to why I loved watching the show. Now... Let's Rock!

2. The Steps Of Knowledge

This might be hard for the movie to actually play out, but, according to TVLine's movie adaption news, the Steps of Knowledge are supposed to definitely be included in the film. And, let's be real for a second, how could they not be? I am so ready to answer all of these questions.

Those temple guards were creepy. Getting through the Temple Run was a challenge not only because of the physicality of it all, but because you knew guards could jump out at any moment. But, this time, I am so ready to see them.

4. The Pit Of Despair

The Pit of Despair from the show's Temple Run is bound to be an adventurous moment for the film. While, in the game show, it was merely a giant ball-pit like obstacle, in the film, it could totally be a moment full of quicksand and struggling to get out. I'm counting on you for this one, Nickelodeon.

5. The Shrine Of The Silver Monkey

Putting together a simple monkey has been a task proven to be harder than you might think. In fact, numerous contestants over the course of the show have taken on the challenge and failed. So, can the characters in the upcoming movie put the shrine together in time? I fully expect this to be one of their epic challenges over the course of the film.

Before these siblings can even take on gathering their artifact from the hidden temple, they need to make it to the temple. And the only way to get there? By crossing the moat. Yep, that's right. I'm expecting one epic journey across water for these three new characters.

7. All Of The Team Animals

I'm talking about the Red Jaguars, the Blue Barracudas, the Green Monkeys, the Silver Snakes, the Orange Iguanas, and the Purple Parrots. Obviously, the three siblings going on this temple journey won't be split into the six original teams from the show, but some kind of recognition towardseither the animals or the team concepts themselves would be nice. Also, can we maybe find out which team of the six is the ultimate champion? Thanks.

Now, considering that Kirk was the host of the game show, and the television movie is obviously not a game show, including him might not really make the most sense when thinking about it at face value. However, I think a little cameo appearance from the original show's host would be a nice little addition to the chaos of it all. Maybe he can even help give them a clue along the way?

I don't expect the characters in the movie to be wearing those cheesy '90s t-shirts, but seeing an appearance from the original team attire might also be a fun little throwback. Maybe they can come a across a store with the t-shirts hanging in the background?

If the classic Temple Run music is not playing at during at least one point in the film, I'm going to be seriously disappointed. Maybe they could put together a remix version for movie?

The Legends of The Hidden Temple-themed television movie starring actress Isabela Monae will be airing later on in 2016. Start preparing yourself for the adventure.

More like this
Netflix Reveals First Look At Wednesday In The 'Addams Family' Spinoff Series
By Bustle Editors
Everything To Know About 'And Just Like That...' Season 2
By Jack Irvin
Revisit 1992’s 'A League Of Their Own Cast' Photos After The New TV Series
By Grace Wehniainen
At 28, Lesley Manville Was Acting, Picketing, & Singing Kate Bush Songs
By Olivia-Anne Cleary
Get Even More From Bustle — Sign Up For The Newsletter