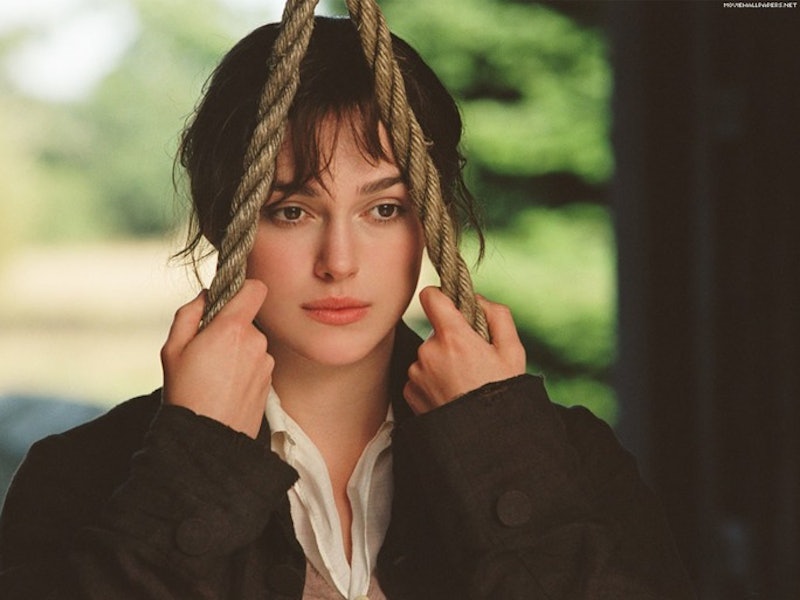 From the picture books our parents and teachers read us as children to the novels we found as young adults to the literature we feed our reading obsession with today, it's undeniable that books have helped to shape us into the people we are today. We all have that certain novel that inspired us to follow their dream or the helped us discover who we wanted to be, and for most of us, there were those special book characters that made us feminists.

People become feminists for so many reasons, from their real-life experiences to those of the women around them, and there are so many outside influence that shape the kind of feminist we become. As young girls, we're exposed to television shows, movies, music, and, most of all, books that impact the way we look at and think about the female experience and feminism itself. For me, books played a huge role in shaping me into the feminist I am today, largely because of the positive female role models they gave me. From the protagonist in my favorite bedtime story to the author of my favorite memoir, these heroines in books inspired me to challenge the norm and fight for my rights, whether they be in the conference room or the doctor's office, and for my equality.

Books are powerful tools, and so are the female characters, like these 13 characters that made us feminists, in them.

Before we even knew what the word "feminist" was, the titular character of Robert Munsch's The Paper Bag Princess was there to inspire us to become one. Fierce, smart, and bold, Princess Elizabeth rescued the nasty prince from the evil dragon, showing girls everywhere that not all girls are damsels in distress — plenty of them, are heroes, too.

A heroine like no other, Lyra Belacqua's made us all want to be just as strong, clever, and fearless as she was. When Lyra began to realize the restrictions placed on her gender in her society, she ran away from a life of expensive dresses and fancy parties and instead showed readers that girls could do a lot more outside the house than in it. Lyra's fierce feminism proved could not only go on adventures, but lead them, too.

While science fiction is often criticized for it's vastly while, male heroes, Nalo Hopkinson's Midnight Robber defies all that with the book's heroine, Tan-Tan Habib. Tan-Tan starts the book as a 7-year-old girl, but over the course of the novel, she grows into a strong and powerful woman — a true hero, really — who is able to overcome the emotional, physical, and sexual abuse she endured for years from her father. Her struggles with guilt, shame, and disgust she feels after becoming pregnant with her father's child are reflective of the feelings of real life sexual assault and rape victims, and her ability to overcome them are inspiring to women everywhere. Tan-Tan made us all want to become feminist and defend women's rights, especially the rights we have over our own bodies.

Jane Austen created several inspiring, memorable heroines, but the one that made us all want to be feminist was none other than Pride and Prejudice's Elizabeth Bennet. She's smart and imaginative, and despite the best efforts of those around her, she refuses to completely give in to her role as a woman. She's opinionated and outspoken, and her boldness became an early example we all wanted to follow.

While some people see her as a feminist icon failure, others find the ultimate feminist inspiration in the queen of the Amazons, Wonder Woman. A true ass-kicking hero, Wonder Woman was one of the first female superheroes to grace the pages of comic books, and she's been proving that women can fight evil, take down bad guys, and save the world just as easily as men can ever since. A true warrior and leader, Wonder Woman made us want to feminists, queens, and superheroes all at once.

No character taught me more about nonconformity than Jerry Spinelli's Stargirl. A bold and unique young woman, Stargirl taught young feminists everywhere the power of kindness over violence, acceptance over prejudice, and that peace can get you much farther than conflict. A remarkably original character, Stargirl is one of my favorite feminists from YA literature.

A complex female character written at a time when so few existed, Charlotte Brontë's Jane Eyre made us all want to become feminists. Despite her troubled childhood and harsh upbringing, or maybe because of it, Jane learns to take care of herself, and whatever hardship she suffers, she relies on herself to get back on track. The complete opposite of a damsel in distress, Jane Eyre has been, and will continue to, spreading feminism for generations of women.

One of the most inspirational characters of young adult literature, To Kill a Mockingbird's Scout Finch made us want to be more than just feminists. She made us want to be moral crusaders, spokeswomen for the weak, and defenders of the innocent. She taught us about compassion, kindness, love, and yes, even hate — things that are essential to understanding the fight for women's rights. If Scout Finch didn't make you a feminist, no book character will.

Before there were women fighting against slut shaming, cat calling, and the persecution of women based on their sexual history, there was Hester Prynne, a Puritan shunned by her community after the birth of her illegitimate son. Though she wasn't the kind of character to lead a revolt or start a women's rights group — this is the 17th century after all — she was the kind of character who, despite the nasty whispers behind her back and the public shaming she had to endure, stood tall and refused to let go of her dignity. A true survivor, Hester made us want to be feminists so we could fight for respect for women everywhere.

In a novel filled with themes of racism and sexism, The Color Purple's Celie shines like a bright, feminist star, drawing us all in. Though she suffers throughout her life and struggles with the internalized prejudices, Celie stays strong throughout the novel, proving that, no matter what the circumstances and how often people try and take it from us, women are never truly without power. Her relationship with the other women in the novel, including Nettie, Shug, and Sofia is a beautiful and moving example of the power of sisterhood and how, if we build each other up instead of tear each other down, we can help one another not only survive, but find happiness.

If you weren't a feminist by the time you read The Girl with the Dragon Tattoo, you certainly were after meeting Lisbeth Salander, the book's fierce female protagonist. A true survivor, Lisbeth doesn't let anyone, man or otherwise, take advantage of her. She is strong and powerful, a defender of herself and other women in the fight against male domination and sexual assault. Though her tactics may be controversial, Lisbeth made us all want to fight, tooth and nail, for the safety of women.

Female detectives have a knack for making us want to become feminists, just look at Harriet Welsch, Nancy Drew, and, of course, Agatha Christie's Miss Jane Marple. At a time when detectives in books were largely men, Christie gave us Jane Marple, a little old lady spinster who could solve mysteries just as well, if not better than, the boys.

Is it a feminist character round up if you don't mention The Bell Jar? I didn't think so. Esther Greenwood, the main character in Sylvia Plath's fictional novel that closely follows her own life, awoke the inner feminist in all of us. Her fight to fit in and find her place in the world, her resistance to become what was expected of her, and her struggles with mental illness stirred that now familiar feeling injustice, and fanned the flames of our inner feminist power.